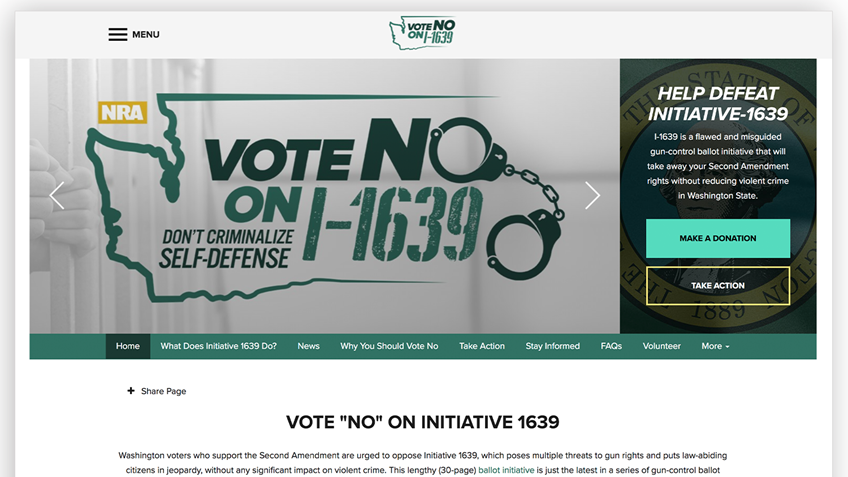 Fairfax, Va. - On behalf of Washingtonians and the National Rifle Association for Freedom, the National Rifle Association launched an informational website. Initiative1639.org exposes how this extreme gun-control ballot initiative will add new restrictions on the exercise of Second Amendment rights, regulate ordinary, recreational guns in common use as “assault” weapons, drive up the costs of being a gun owner, and allow the government to authorize the surrender and confiscation of firearms as part of a verification process, all without doing anything to meaningfully address violent crime in Washington State.

"Law -abiding gun owners in Washington State need to understand the impact I-1639 will have on their Second Amendment right to self-defense," said Chris W. Cox, executive director of NRA’s Institute for Legislative Action." The NRA’s new website, Initiative1639.org provides the facts on how this gun-control initiative will infringe on law-abiding citizens’ constitutional rights and make it more difficult to protect themselves and their families."

Highlights of the extreme gun-control provisions in I-1639 include:

Initiative1639.org makes it easy for voters to stay informed, register to vote, volunteer their time, and download material that highlights their opposition to this latest Seattle-inspired gun grab.

"It’s not enough to exercise your rights - you need to protect them at the ballot box. I encourage Washingtonians who value their Second Amendment rights to visit Initiative1639.org and find out how they can join the fight to protect their rights," Cox concluded.