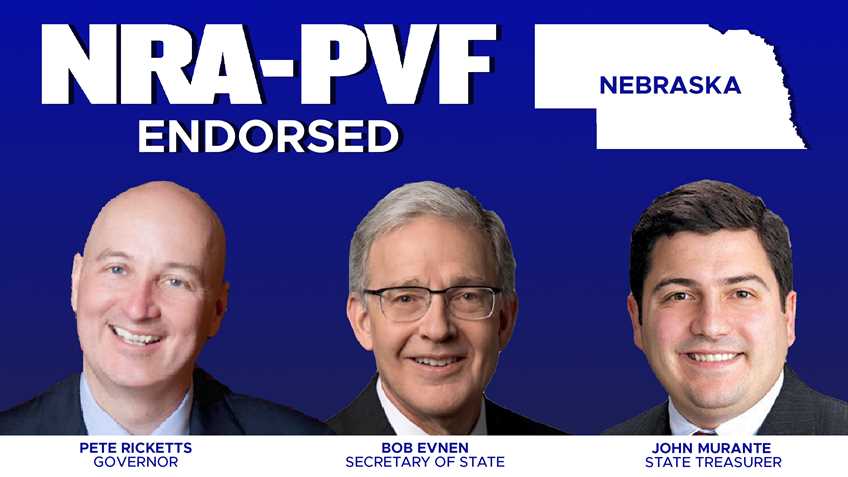 Fairfax, Va.— On behalf of our members in Nebraska, the National Rifle Association's Political Victory Fund (NRA-PVF) proudly announces its endorsement of Pete Ricketts for Governor of Nebraska, Bob Evnen for Secretary of State, and John Murante for State Treasurer.

NRA-PVF Chairman Chris Cox stated, “The NRA has endorsed a strong pro-freedom slate of candidates for statewide offices. At a time when the five million members of the NRA are under attack like never before, these candidates have very publicly chosen to stand with us.

Pete Ricketts has an "A" rating from the NRA. Earlier this month, Ricketts signed into law Legislative Bill 902 to ensure that personal information contained in Firearm Permit and Purchase records will be protected from public records requests.

Bob Evnen’s strong stated support for the Second Amendment has earned him an "AQ" rating from the NRA.  Evnen backs legislation that would make it easier for law-abiding Nebraska gun owners to get a concealed handgun permit.

Senator John Murante’s strong support of the Second Amendment has earned him an "A+" rating from the NRA. He supports legislation that would prevent local governments from passing ordinances that make it harder for law-abiding gun owners to protect and defend themselves.

“We encourage all NRA members to go to the polls and support Pete Ricketts, Bob Evnen and John Murante in the Primary Election on Tuesday, May 15, and then to ask their fellow gun owners and sportsmen to do likewise," concluded Cox.