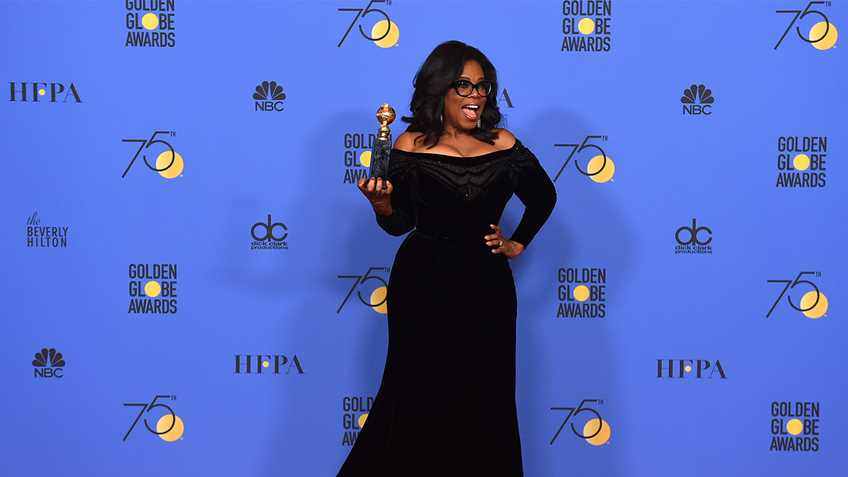 Democrats searching for a standard-bearer in the 2020 presidential election lit on long-time entertainment, media, and publishing figure Oprah Winfrey this week, following a speech Winfrey gave at a televised Hollywood extravaganza. Winfrey received wide acclaim for her remarks, but amidst the #oprah2020 mania that has followed, questions have arisen over what Winfrey stands for politically and whether she has the desire and skill set to lead the Free World. Some of those questions remain unanswered, but for gun owners, one thing is crystal clear: Oprah Winfrey embraces the staunchly anti-gun posture of contemporary Hollywood.

Winfrey’s anti-gun activism dates back to at least the 1990s when she was closely involved with the rabidly anti-gun group CeaseFire, Inc. The now defunct group’s website, still archived online, attests to its fanaticism. It’s Mission Statement, for example, explained:

Through a coordinated public service announcement (PSA) print and broadcast campaign, our mission is to mobilize a broad cross section of American leadership to educate and promote handgun-free homes and families. By highlighting the public health implications of handgun violence, Cease Fire can educate Americans to view handguns as the inherently unsafe and dangerous products they are, and not appropriate to have in any home. [Emphasis added.]

Oprah Winfrey was part of this “education” campaign, appearing in CeaseFire’s print and broadcast ads and in its fundraising materials.

CeaseFire pioneered elements of the modern anti-gun publicity playbook, heavily promoting dubious factoids and inflating statistics about firearms’ supposed toll on “children” by including statistics pertaining to 18- and 19-year-old adults (a common age for gang membership). Its ads featured actors such as Winfrey and Paul Newman gravely recounting media stories about gun owners accidentally killing their loved ones. Even gun safes, according to the group’s ads, weren’t to be trusted. Taglines included, “Before you bring a gun in the house, think about it” and “A Home is no place for a handgun.”

The legendary Charlton Heston, who would go on to be one of the NRA’s most iconic presidents, lamented in 1997, “We've reached that point in time when our national social policy originates on ‘Oprah.’”

Indeed, in 2000, Winfrey promoted the so-called Million Mom March (the march) on her popular daytime talk show. The march was actually a Mother’s Day rally of women in support of gun control on the National Mall. Although the actual number of “marchers” who attended the D.C. rally was considerably less than a “million,” the event received a major boost from Winfrey’s free publicity.  The Brady Campaign To Prevent Gun Violence – which later merged with the anti-gun organization that formed around the march – recounts that the march’s website crashed from the crush of traffic generated when its online address was published during Winfrey’s show.  Winfrey told her viewers that if they didn’t “do something” to stop “children” from being killed by firearms, they were “part of the problem.”

Insisting that she is “apolitical,” Winfrey nevertheless became a staunch supporter of Barack Obama’s hyper-partisan political career. Wikidpedia states that “Oprah Winfrey's endorsement of Barack Obama was one of the most widely covered and studied developments of the 2008 presidential campaign.” One paper by two economists from the University of Maryland estimates that Winfrey’s endorsement “was responsible for approximately 1,000,000 additional votes for Obama,” potentially swaying the 2008 Democratic primary in the two-term president’s favor. “Winfrey, for her part, described Obama’s political ascendance as “beyond and above politics” and “something new.”

Obama’s strongly pro-gun control views clearly did not diminish Oprah Winfrey’s support for him.  Rather, she repeatedly used her vast public reach to support Obama’s gun control agenda during his presidency. At Harvard’s commencement in 2013, for example, Winfrey plugged the administration’s #1 gun control initiative, “universal background checks.” In 2016, she indicated support for an “assault weapons” ban (another Obama-backed measure) in the wake of a mass murder in Orlando, Florida. “Are we a country that really believes that assault weapons should be made available to anybody?” she commented. “Are assault weapons necessary? I … just say, ‘enough.’”

Fortunately, unlike most of her other high-profile endeavors, Oprah Winfrey’s gun control activism has been a failure, at least as measured by additional federal gun control laws. But it’s hard to overstate the immense cult of personality that surrounds her, as well as the reflexive adulation she engenders from her fellow elites in entertainment and media. Like Barack Obama – with whom she remains close – a President Oprah Winfrey could count on their unconditional support, as well as their protection against any serious scrutiny or criticism.

Florida Alert: League of Women Voters Off The Rails