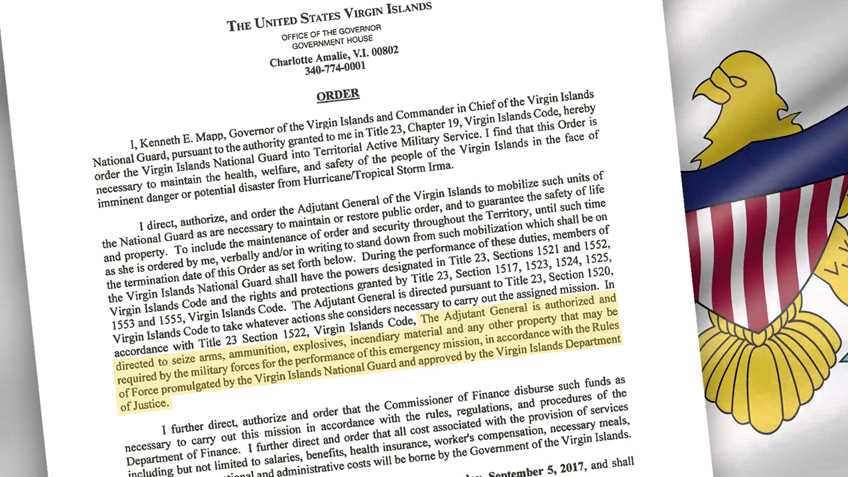 There’s an old saying that the Devil’s greatest triumph was getting people to believe he doesn’t exist.

Stamped with a gold seal, the order came as more than 100,000 Americans braced themselves for the landfall of Hurricane Irma in the Caribbean, a Category 5 storm. This was not the first time the U.S. Virgin Islands (USVI) had faced the threat of a serious hurricane on the way. But the reality in this case was far graver for the USVI’s law-abiding gun owners.

For Gov. Kenneth E. Mapp’s order of Sept. 4, 2017, put them not just at the mercy of nature but of those who would exploit the chaos of the storm to victimize the vulnerable. Mapp activated the National Guard “to maintain or restore public order, and to guarantee the safety of life and property.” But he went further, shockingly decreeing, “The Adjutant General is authorized and directed to seize arms, ammunition … and any other property that may be required by the military forces for the performance of this emergency mission … .”

Forced confiscation of Americans’ lawfully-owned firearms – a phenomenon one gun control advocate referred to as “a paranoid delusion manufactured out of whole cloth by the National Rifle Association” – became an imminent, undeniable threat.

Mapp’s order embarrassed the gun control lobby, because it said too much about what they really want and their cynical willingness to exploit every possible circumstance to get it. If the Second Amendment’s individual right to keep and bear arms for self-defense has any value, it surely must be in an emergency where first responders are overwhelmed and good citizens have no choice but to protect themselves.

But whenever America’s nerves are set on edge, gun control opportunists hope to exploit the tendency of some to reject the harsh reality that they could find themselves in a situation where the emergency services they take for granted are simply not available.

That sort of determined helplessness is essential to the gun control mindset. It’s why gun control advocates deny – despite incontrovertible evidence to the contrary – that ordinary citizens can effectively use guns in emergencies. It’s why they insist that a gun in the home only increases the occupants’ risk. It’s why they call any suggestion of arming someone threatened by a bigger, stronger, or more aggressive assailant “victim shaming.”

It’s why any gun control measure is said to be justified if it could conceivably “save just one life,” but any example of a gun actually saving an innocent life is dismissed out of hand as a freak occurrence.

But gun control advocates also hope that they can shame or silence their opposition when exploiting human tragedy. Is it really time to press the legitimacy of Second Amendment rights when a small island community is under threat of being battered by a Category 5 hurricane?

You bet it is, especially when having or not having a gun could be the difference between life or death for an innocent person.

And so the NRA didn’t blink in 2005 when coming to the aid of Hurricane Katrina victims in New Orleans who were being forcibly disarmed by local officials. First responders had been overwhelmed by the demands of the storm, and residents who had not evacuated their homes were effectively dealing with anarchy.

Incredibly, the response of Mayor Ray Nagin and Police Superintendent Eddie Compass in that situation was to order the confiscation of firearms from lawfully-armed residents. A camera crew infamously captured the shocking sight of a frail woman being slammed to the ground in her own home by police officers enforcing the post-Katrina order. For many, this became an indelible image of the very sort of violent firearm seizures that some claim could never happen in the U.S.

The NRA successfully petitioned a federal court to halt the New Orleans confiscations and to issue an order requiring the return of the seized firearms. Yet not until 2008 did the NRA and New Orleans come to terms on acceptable procedures for return of the unlawfully confiscated property.

The NRA also promoted legislation in the wake of Katrina to prevent government officials from using their emergency powers as a pretext for disarming the citizenry. In 2006, President George W. Bush signed into law the Department of Homeland Security Appropriations Act, which contained an NRA-backed amendment modeled after legislation introduced by then-Rep. Bobby Jindal (R-La.). The provision, now codified at 42 U.S.C. § 5207, prohibits persons acting under color of federal law, receiving federal funds, or acting at the direction of a federal employee from seizing or authorizing the seizure of lawfully-possessed firearms during a state of emergency. Most U.S. states now have similar laws.

But firearm confiscation and the measures that enable it, including firearm owner licensing and firearm registration, are still the lodestar of the gun control agenda.

In June, Judge Roger T. Benitez of the Southern District of California blocked a California law that retroactively prohibits possession of so-called “large capacity” magazines that Golden State residents had originally obtained lawfully and in good faith. As Judge Benitez explained in his opinion, “On July 1, 2017, any previously law-abiding person in California who still possesses a firearm magazine capable of holding more than 10 rounds will begin their new life of crime.” He also remarked on how California has used “incrementally more burdensome restrictions” that threatened to render constitutional rights “meaningless” if viewed in isolation and not as part of a broader regulatory scheme.

California and other states are also embracing firearm confiscation via so-called “extreme risk protection orders” (ERPOs). Not content with creating increasingly broader categories of statutorily prohibited persons, these states are empowering courts to issue orders for the seizure of guns from people who aren’t captured by these categories already. That is, people who have committed no disqualifying crime, have no serious charges pending against them, have never been subject to a court-ordered commitment or incapacity finding, and aren’t drug addicts or subject to domestic violence protective orders. In some cases, ERPOs can be issued and executed before the accused has even had a chance to respond to the petitioner’s allegations.

California and New York also crosscheck gun licensing or registry databases with records of disabling convictions or court orders and, with no judicial involvement whatsoever, send squads of heavily armed police officers to collect firearms from their owners. In some cases (like the one I wrote about last month), mistakes occur. In others, they also take away firearms from other household members who aren’t actually prohibited.

California Department of Justice Special Agent Greg Cameron, who participated in that state’s seizures, believed that most of the targeted people posed no public safety threat and didn’t even know they were prohibited.  “It’s embarrassing,” he said. “It does absolutely nothing to curtail crime.”

But the activists, politicians, and pundits who support gun control don’t care if laws or confiscation efforts focus on dangerous people. They see no value in “ordinary people” having guns, so every disarmed American is a victory, however small. And every time they take away one gun, they hope to make it that much easier to take away the next.

As for the USVI, the NRA swiftly condemned Gov. Mapp’s order and pledged to take any legal action necessary to vindicate the Second Amendment rights of his constituents. That message apparently hit home.

The next day, Gov. Mapp appeared before a national audience on the Tucker Carlson Show and offered a convoluted explanation of the order’s intent, notwithstanding the plain words on the page. Ignoring the word “seize,” Mapp claimed it simply meant the adjutant general could purchase arms at retail without normal procurement procedures if the National Guard’s own equipment proved insufficient for its mission.  “This is not about seizing anybody’s personal property,” he argued.

How a seizure order is not about seizing property is anyone’s guess, but obfuscation has always played a central role in the ongoing assault on our rights.

To date, we have no information that any untoward action has, in fact, occurred under Gov. Mapp’s Sept. 4 order. Yet the NRA remains committed to standing with the people of the USVI and anyone else who is threatened with unconstitutional firearm confiscation.

And in a broader sense, the USVI seizure order should give us all pause when anti-gun legislators and regulators discuss the need for firearm registration or licensing as just another “common sense” measure to combat gun violence.  With a full licensing and registration system in place, Gov. Mapp’s seizure order would have been administratively easy to carry out had not he been forced to recognize the illegitimacy of his position and backtrack the order on national television.

America’s law-abiding gun owners must remain ever vigilant of any attempt to undermine our firearms freedom, especially when elected officials use extraordinary events to curtail our rights in the name of “public safety."  Because if you don’t believe gun confiscation can happen in America, the next storm may well catch you unaware.