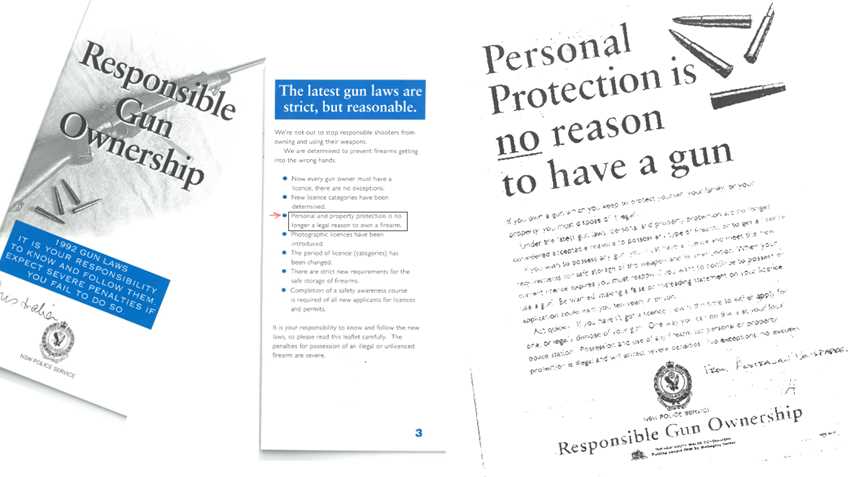 In 1992, the government of New South Wales (the most populous Australian state) enacted the “Firearms Legislation (Amendment) Act 1992.” Under the law, gun owners were required to express a “genuine reason” for possessing a firearm. In pamphlets and newspaper advertisements explaining the new measure, the NSW government proclaimed, “Personal protection is no reason to have a gun.” Four years later, Australia’s states and territories put in place the National Firearms Agreement, which resolved that in every jurisdiction “personal protection [shall] not be regarded as a genuine reason for owning, possessing or using a firearm.”

Australians cannot acquire firearms in anticipation of using them in self-defense. However, a recent incident from NSW suggests that officials will not even tolerate citizens using firearms lawfully possessed for other purposes for self-defense when confronted with severe danger.

At 3 a.m. on September 14, David Dunstan was alerted to a suspicious noise on his Bungowannah, NSW farm where he lives with his wife and three children. When he went outside his house to investigate the disturbance, Dunston came upon a man armed with a piece of wood and a knife.

Concerned for his family’s safety, Dunstan, a licensed gun owner, retrieved a .22-caliber rifle from a locked gun cabinet, and without loading it, confronted the trespasser. Describing his mindset to the Herald Sun, Dunstan said, “I went into protection mode ... I yelled out to Andrea (his wife) to get the key to the gun cupboard.” Dunstan then used the unloaded rifle to detain the knife-wielding man until police could arrive. Police later determined that the trespasser had attempted to enter a child’s bedroom at another home before going to the Dunstan property.

Australians cannot acquire firearms in anticipation of using them in self-defense. However, a recent incident from NSW suggests that officials will not even tolerate citizens using firearms lawfully possessed for other purposes for self-defense when confronted with severe danger.

Had this defensive gun use happened in the U.S., Dunstan’s heroic actions would have likely elicited praise from the police and been celebrated in the American Rifleman’s Armed Citizen column. Instead, the NSW resident has become the target of government scrutiny.

When law enforcement came to Dunstan’s farm to investigate the incident, police confiscated the rifle he used to defend his family, along with two others. Upset, Dunstan told the Herald Sun, “What are you supposed to do if someone was breaking into your house… I don’t know what, as a law-abiding citizen of Australia, we’re supposed to do?” Dunston went on to say, “The police have handled this the wrong way (and) I can’t get an answer out of them.”

Lamenting the lack of respect for armed self-defense in Australia, Dunstan told Yahoo7 News, “You go and break into someone’s house you can be expected to either get arrested, shot or you could be maybe killed… And until that happens this sort of stuff keeps going on.”

Gun rights advocate and Liberal Democratic Senator for New South Wales David Leyonhjelm has come to Dunstan’s defense. In an interview with Yahoo7 News, Sen. Leyonhjelm said, “Dave was defending his family against a threat. He did what any normal father would do.”

Speaking with the Border Mail, Dunstan remarked, “I just don’t know what I should have done, what would have been the right way to do it.” Sadly, in the Land Down Under there doesn’t seem to be a “right way” for the law-abiding to fight back against criminal violence.