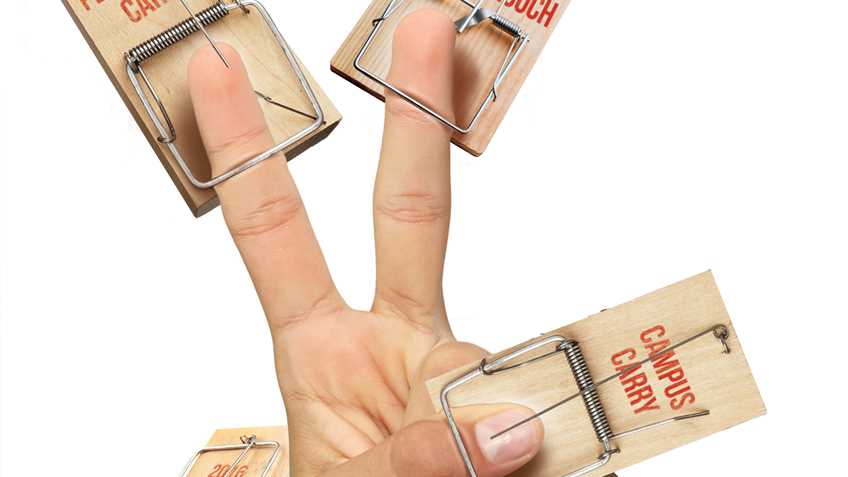 Each month when I write about our right to keep and bear arms, it’s difficult to predict what the state of play will look like by the time this article hits your mailbox. This is especially so when it comes to the dizzying array of fake news from an opposition that is not only increasingly desperate but also increasingly detached from reality.

This time, however, The Washington Post made it easy. In July, the Post published a story that is so ridiculous, so outlandish in its shading of the truth, that it may very well take its place alongside Rolling Stone’s timelessly ludicrous “expose” on America’s five most dangerous guns (i.e., pistols, revolvers, rifles, shotguns, and derringers). The story ran under the headline: “Gun-control advocates pushed back a tough year at the state level, and they’ll take the win.”  The basic premise of the Post article is that gun control is “winning” because it’s not losing as badly as it conceivably could.

That’s right. According to The Washington Post—maybe America’s second-most prominent nationwide newspaper—“gun control” is “winning” at the state level in 2017.

And, yes, the reporter actually calls it “gun control” in the piece, not one of the usual euphemisms like “gun violence prevention” or “gun safety” laws. Apparently, it’s acceptable to be honest about the agenda when spiking the football, rather than trying to sneak something by the public.

The story’s byline is from a reporter whose biography says she “writes about politics.” The content, however, is derived from a “report” by the Law Center to Prevent Gun Violence (LCPGV), a group of gun-hating lawyers now formally associated with Americans for Responsible Solutions (ARS), the gun ban group led by Gabby Giffords and her husband, Mark Kelly.

The basic premise of the Post article is that gun control is “winning” because it’s not losing as badly as it conceivably could. It attempts to conjure a sort of Rocky Balboa theme by portraying the NRA as an entrenched titleholder facing a plucky upstart in the likes of organizations including ARS, LCPGV, and the Bloomberg-backed Everytown for Gun Safety. According to the article, the outcome of their clashes in Trump’s overwhelmingly “red” America is a foregone conclusion: the reigning champ will prevail. But without a conclusive knockout blow, so the storyline goes, the champ’s victory is hollow and short-lived and only sets the stage for the sequels in which the contender finally turns the table.

An LCPGV attorney is quoted as saying, “2017 marked a year where we held our ground … and then some.” An ARS executive enthuses, “We’re getting better and better.” And Everytown’s president even claims, “When you look at what’s happening in statehouses across the country, the gun safety movement is winning.”

In reality, however, “winning” for the gun control side was nothing of the sort. Even with many legislatures still in session and numerous pro-gun initiatives on the move, the NRA has landed all of the year’s significant wins to date, and the opportunities that were missed this year will be revisited until success is achieved in coming legislative sessions.

The Post article glosses over the fact that the ratio of pro to anti-gun bills actually signed into law at press time was 20:1. Only in the modern era of fake news running amok would that ratio result in the clear loser proclaiming victory and the media reporting it as true.

Moreover, the anti-gun legislation that did pass affected only peripheral issues, whether incremental expansions upon existing prohibited person categories, erosions of due process rights for persons accused of misbehavior, or funding for gun control activity already authorized by law.

None of those developments is welcome news for anyone who respects the U.S. Constitution or rule of law, and they were all opposed by your NRA. But they demonstrate how eager the opposition is to capitalize on any development they can portray as a turning point.

Meanwhile, the pro-gun victories were substantive and in some cases game-changing. Last month I mentioned the omnibus bill signed into law in Iowa, legislation that catapulted the Hawkeye state into the upper ranks of pro-gun jurisdictions. Indeed, it might have been the most important pro-gun bill in Iowa’s history, apart from 2010’s shall-issue concealed carry law.

Leading-edge developments also made their way into law in numerous states. Permitless concealed carry was enacted in New Hampshire and North Dakota. Campus carry forged ahead in Arkansas and Georgia. Gun owners received additional protection for the storage of firearms in personal vehicles in Arizona, Arkansas, Indiana,

Tennessee and Texas. And self-defense laws were materially strengthened in Florida, Iowa and Oklahoma.  The Post article glosses over the fact that the ratio of pro to anti-gun bills actually signed into law at press time was 20:1. Only in the modern era of fake news running amok would that ratio result in the clear loser proclaiming victory and the media reporting it as true.

Florida has been a leader in popularizing “Stand Your Ground” laws that allow victims to determine for themselves whether retreat or defensive force is the safer option in the face of unlawful aggression.

A precedent-setting law passed this year in Florida would revamp the legal procedure in “Stand Your Ground” cases to ensure the prosecution carries the burden of proof through all phases of the proceedings. Unsurprisingly, the law is generating controversy with those who don’t believe in self-defense, but its enactment demonstrates a commitment to freedom that goes beyond the status quo.

The logic of the Post’s own story, such as it is, also requires acknowledgement that precious little has happened to advance the gun control agenda, even where anti-gun forces have a relatively free hand. In New Mexico, for example, national anti-gun groups poured hundreds of thousands of dollars into a failed bid to push universal background checks through a legislature newly controlled by Democrats.

The Post’s story, standing alone, has little value or important data, but it’s worth talking about for what it reveals about the modern gun control movement. It might be that at this point in history the mainstream press simply isn’t sophisticated or self-aware enough to understand, much less critically evaluate, the nuances of the gun control debate. But even if they were, it’s clear that the mass media have so attached themselves to the gun control cause that they’re distinguishable from groups like ARS/LCPGV only because they have a broader portfolio of social issues to promote, not in their viewpoints or desire to see America disarmed. Media and gun control advocacy have effectively merged.

That’s not exactly a new development, but the transparency and shamelessness of the alliance is notable even to those of us who have been observing the process for a long time. This collaboration allows gun control advocates to use the reach and “prestige” of the press to push as “the truth” their “science,” their “studies,” their “facts” and their narratives.

The premise that a lie told often and insistently enough eventually will be accepted as truth is an idea attributed to tyrants throughout world history. And so the media tells the American public again and again—despite obvious evidence to the contrary—that firearms aren’t necessary for self-defense, that Americans don’t want guns but do want more gun control, and that firearms not fielded by any Army are “military-style assault weapons.”

And now they’re insisting—egged on by gun control groups with a financial interest in delivering results to patrons like Michael Bloomberg and George Soros—that the tide is turning against the right to keep and bear arms in America and that the glorious victory they have long sought is inevitable.

But it would be a mistake simply to dismiss all their claims and aspirations as fantasies. It is certainly true that firearm prohibitionists are as emboldened, determined and well-funded as ever. It is also true that they have insinuated themselves not just into the mass media apparatus, but into nearly every opinion-influencing sector of American society, from education, to entertainment, to law—even to sports and medicine.

Over time, the combined efforts of these entities have eroded other bedrock and once uncontroversial American values. It would be foolish for us to think the values embodied in the Second Amendment are immune from the same process.

But even if some newspaper writers want you to believe that their version of history is already carved in stone, they don’t get to write the next installment in the unfolding story of America’s devotion to its Second Amendment protected freedoms. That remains the job of the American people. Rest assured, your NRA is here to ensure that the good guys, as they always have in the American saga, will find a way to win.