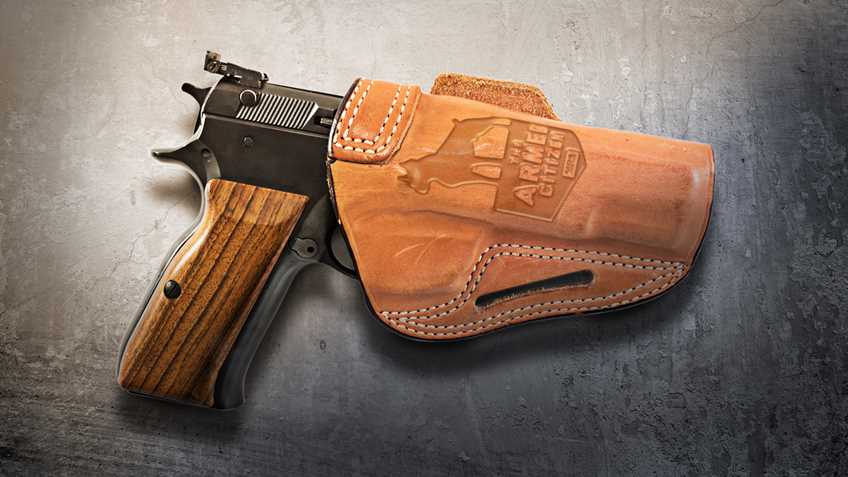 Even the most ardent gun grabbers have to admit that most women lack the physical strength to effectively ward off an attack by a male aggressor. And criminals prefer an easy target.

But that’s not Melinda Vandal, a Cleveland woman who lives alone and is confined to a wheelchair. When she saw two young men outside her garage, one cutting through the screen window with a knife and the other prowling near the door looking for an entry point, Vandal didn’t hesitate. She dialed 911 and grabbed her gun, preventing the situation from escalating without firing a shot.

We reached out to Vandal by phone to get more details. Although she grew up with firearms around since her father was a security guard and worked for the police department at one time, Vandal hasn’t been a gun owner very long. Shortly after a second property adjacent to her home became vacant, Vandal spotted strangers nearby. That’s when she decided to get a gun. “I got it for protection after seeing the same two men in my neighborhood,” she said. “Looking for something small something I could handle. I’m in a wheelchair.”

Vandal has lived on Cleveland’s west side for more than 20 years, and described the changes in her neighborhood of late. When she spotted the two men armed with a knife on her property, she was decisive, “I put the gun up to the window of the door and I yelled, ‘get off my property,’ and they ran off.”

She is now living in fear. “These two guys 17-19 years old are still coming around my home,” she said. “They were near here two days ago, staring, giving me dirty looks since the incident. Two abandoned houses, one on each side of me. They put a stolen bike in the driveway of the one abandoned home the last time I saw them.”

It’s frightening to consider what might have happened had Vandal not been armed. She has considered this: “I don’t know, they had a knife, one was on my patio, and he might have come inside. So I had to think twice, this was the first time this has ever happened to me.”

Vandal doesn’t consider herself a gun aficionado, never having taken formal training. But she does see gun ownership as a right that non-gun owners should respect.

“Yes. I hate to say it but yes, as a single woman, you need some kind of protection, especially if you don’t have a man in your life,” she said. “You can’t walk around with nothing.”

After what she has endured, her Second Amendment support isn’t surprising. “It’s a right and we do need to protect that right,” she said. “I waited six hours! I could have been laying in my house dead. Since they didn’t come in or steal or harm me, there was no police report.”

Anti-gunners often mock the frequently used quote “When seconds count, the police are minutes away.” Clearly, police response times are usually far better than what Vandal experienced, but her quick use of a firearm to ward off her attackers was effective and possibly saved her life. The police told her that she did the right thing, which Vandal described as a bright spot. The police do not have a duty to protect, which is why the Second Amendment is so important.

Vandal feels strongly that there is a lesson here for women who are fearful of firearms and avoid owning and using them.

“I don’t know what else to tell them,” she said. “Get something else that you feel safe with. Guns are tools. I’m not interested in harming anybody, but I do need to protect me. I’ll do what I must to keep them from harming me.”

A recent study on guns by Pew Research found that among gun owners, protection tops the list of reasons to own a firearm. The survey found that three in 10 respondents said they own guns, cutting across all demographic groups.

Women own firearms at a lower rate than men, but those numbers are shifting upward. Vandal is a part of that group, concluding, “You have to protect your self somehow, and a gun is one way to do that. There’s other means, but to each their own.”

Once again, the anti-gunners in Ohio target the wrong people