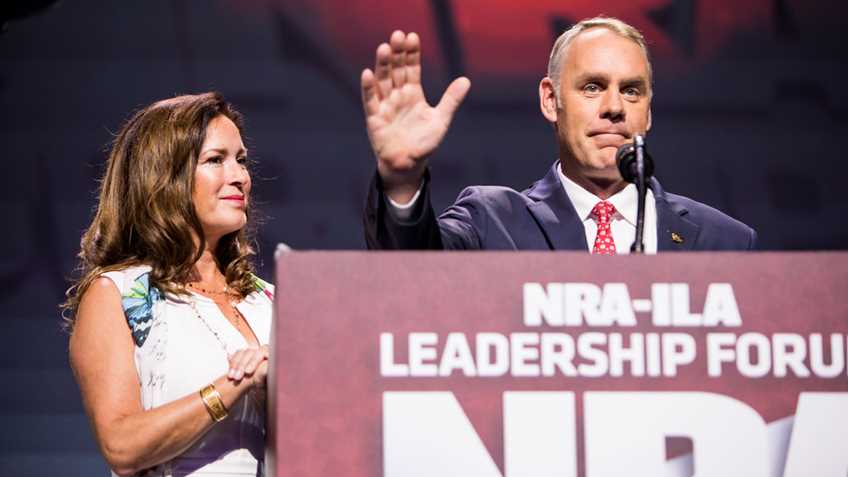 This article appears in the July 2017 issues of the Official Journals of the National Rifle Association.

Chris W. Cox: Thanks for taking the time to speak with us. I know you have a lot on your plate.

Ryan Zinke: Glad to, Chris. NRA members are some of the most committed conservationists in America.  I know that for a fact because I’m a NRA Life Member.  Sportsmen appreciate all the NRA does to preserve America’s wildlife resources and hunting heritage.

CWC: You made quite an impression on your first day as Secretary, riding a horse through D.C. to the Interior Department.  What message were you hoping to send?

RZ: Well, any day is a great day to ride a horse to work, so I want to thank the U.S. Park Police for making Tonto available to me. As I mentioned that morning, the men and women of the Park Police do a fantastic job, both in protecting those of us in government service and in making sure all Americans enjoy a safe, orderly experience in and around the Nation’s Capital.

I’m from the west, and it’s important that a western perspective leads the Department, and I think Tonto and I sent that message. But to your question, it was a beautiful day, and I was excited to begin one of the best jobs in America.  I also wanted the men and women of the Department to share my excitement for the great things we’re going to accomplish. They gave me a warm reception and I was grateful for that.

CWC: The Department of the Interior [DOI] plays a huge role in opportunities for hunting and recreational shooting throughout the United States. The DOI’s agencies include the Bureau of Land Management, the U.S. Fish and Wildlife Service, and the National Park Service. Its components manage some 500 million acres of surface land, or about 20% of the entire U.S. landmass, including the National Wildlife Refuge System, the National Conservation Lands, and the National Park System.

What influences the way you approach your job managing such an important public trust that means so much to millions of Americans?

RZ: I’m a fifth generation Montanan, and my biggest influence was growing  up on public lands and spending time outdoors hunting, fishing, hiking, camping, canoeing … you name it. I am incredibly fortunate to have these experiences and to have had role models like my father and my time in the Boy Scouts to instill in me a love and respect for the outdoors. I am driven in my role as Secretary of Interior to ensure that all Americans, wherever they live, get to enjoy similar opportunities now and in the future.

I am also influenced by my career in the U.S. Navy and, and in particular, as a SEAL.  When you see that level of devotion, sacrifice, honor, and love of country each day for over two decades, it motivates you in everything you do. America’s best give their all on a daily basis for the freedoms, prosperity, and security we enjoy. Many of them, of course, have paid the ultimate price for these things, so their example of duty and service encourage me to try to live up to that standard in my own life.

Another big influence comes from the state partners we work with here at the Department of the Interior, the state fish and wildlife agencies. They have invaluable expertise and experience in the management of our natural resources.  I believe it’s very important that we work together collaboratively and in an atmosphere of mutual respect and trust.  I think that was lost during the Obama Administration so I look forward to re-establishing the connection.

CWC: On that note, one of your first official acts as Secretary was reversing some executive actions made during the Obama administration. One of those Obama-era actions had been a plan to phase out, by the year 2022, the use of lead ammunition and fishing tackle on lands, waters, and facilities administered by the Fish and Wildlife Service. The Association of U.S. Fish and Wildlife Agencies, the umbrella group for the state partners you mentioned, issued a very strong statement against that action.

The other order you signed seeks to “enhance conservation stewardship, increase outdoor recreation, and improve the management of game species and their habitat.”

I was honored to be with you when you signed those orders.  America’s millions of hunters were very grateful for your intervention. Can you tell us a little more about that?

RZ: As I mentioned in my order repealing the lead ban, that was a case of overreach by the previous administration in pursuit of nothing more than a political agenda. We believe in basing wildlife and land management decisions on sound science, not politics.

My other order was aimed at reviving an earlier initiative begun by President George W. Bush to provide expanded opportunities for outdoor recreation – including hunting and fishing – and the management of games species and their habitats.

RZ: Absolutely. And there’s no better example of that than Teddy Roosevelt himself. I believe his spirit is alive and well in today’s sporting men and women.  I see this as a pretty simple equation.  America’s hunters and anglers are the backbone of what makes our wildlife management system the envy of the world.  It’s time the lead agency on their issues recognized that and acted accordingly.

CWC: How would describe your philosophy of land management?

RZ: As I said during my confirmation hearing, I am an unapologetic admirer of Teddy Roosevelt.  I’m not sure if all of your readers know this, but Roosevelt actually became a Life Member of the NRA while he was President. And he definitely had it right when he set up a system to protect millions of acres of land and guarantee that future generations would have wild places to visit and use.  These lands belong to all Americans and need sound management.

I fully recognize and appreciate there are lands that deserve special recognition and are better managed under the John Muir wilderness model, where we have a light touch and act as observers. I also fully recognize other components of our federal holdings are better suited to the model of multiple use, using best practices, sustainable policies, and objective science.

The community where I grew up depended on the harvesting of resources for its survival, and products from the timber and mining industries, for example, are vital to America’s strength and prosperity.

For me, it’s not a question of good guys or bad guys when it comes to managing our natural resources, but of bringing all parties to the table so that we can achieve a sustainable balance of conservation and development. That will ensure that America’s standard of living remains the envy of the world.

In all this, the partnerships with state agencies have been instrumental to success.  So has access for hunting and other outdoor recreation.  People have always been part of the landscape and we can’t lose sight of the fact that public lands are just that – public.

CWC: Any parting words of advice for NRA members on what they can do to continue to play a role in conservation and sustainability?

RZ: The main thing is to keep doing what you’re doing. Keep hunting, keep fishing, keep camping. Keep enjoying the outdoors. Most of all, keep introducing your friends and family members to these activities. We need to ensure that a love of the outdoors and America’s sporting heritage remain an enduring part of our national DNA. That lies at the core of our success over the last century.

But that will only happen if NRA members and others pass these values onto their kids, their grandkids, their neighbors, their coworkers. Parents, keep your kids in Scouts and similar organizations. Make sure their screen time is offset by time outdoors. Previous generations did it for us, so it’s the least we can do for the next generation.

Thanks again for taking the time to allow us to get to know you better. We look forward to partnering with you to make sure the outdoor activities we all love remain part of the national DNA.

RZ: You bet, Chris. And thank you and the millions of NRA members for all the good work you do. I appreciate your support and dedication to our Second Amendment freedoms and hunting heritage.

A New Day for the Second Amendment: Donald Trump Addresses the NRA