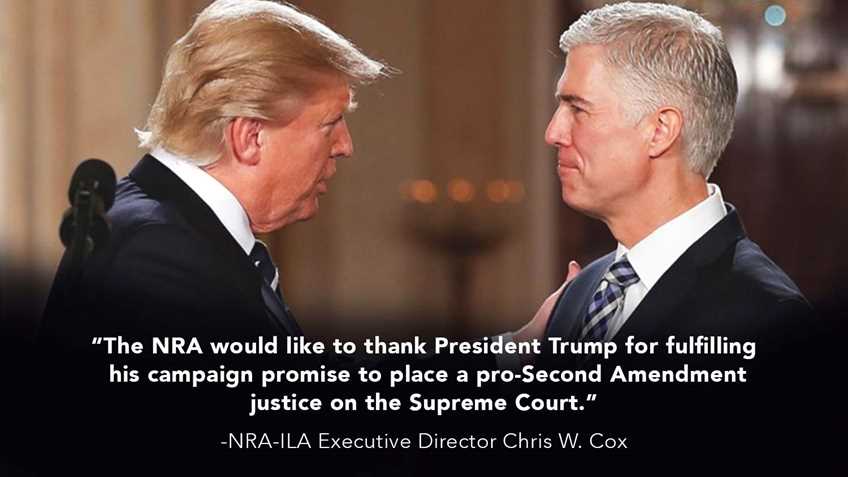 On Friday, the U.S. Senate voted to confirm Neil M. Gorsuch to the U.S. Supreme Court. Judge Gorsuch’s nomination was heavily backed by the NRA, both because of the pro-Second Amendment views expressed in his judicial writings and his originalist approach to jurisprudence. Justice Antonin Scalia exemplified originalism in his landmark Heller opinion in 2008 that recognized the Second Amendment protects an individual right grounded in the principle of self-defense.

Judge Gorsuch’s confirmation capped a dramatic series of events that began with Scalia’s sudden, unexpected death on Feb. 13, 2016. Not only was Scalia the Supreme Court’s leading Second Amendment champion, his was one of only five votes cast in the five- to-four Heller decision, and its five-to-four follow-up, McDonald v. Chicago. Although two justices voting against the Second Amendment in Heller had since left the court, they were replaced in the interim by two equally anti-gun Obama picks, Sonia Sotomayor and Elena Kagan. Thus, with Scalia’s untimely passing, the court was at best split four to four on its continued support for the Second Amendment’s individual right.

History will record that the balance of power on the Supreme Court was in fact a key issue in the 2016 presidential election and that Obama’s hand-picked successor, Hillary Clinton, suffered a crushing defeat after emphasizing her own view that the Heller Court had been “wrong on the Second Amendment.”

Candidate Donald Trump, meanwhile, made no secret of his determination to nominate a pro-Second Amendment judge to the fill Scalia’s vacant seat.  After his victory in November, President Trump kept his promise by nominating Judge Gorsuch.

In the intense media and political scrutiny that followed Trump’s selection, there was never any serious argument against Judge Gorsuch’s credentials, integrity, impartiality, and ability. He has been praised by legal professionals across the political spectrum.

Yet anti-gun loyalists in the Democratic Party, blinded by ideology and unable to recover from their stinging rebuke in the election, launched the first partisan filibuster in U.S. history to block Neil Gorsuch’s nomination.

Senate Republicans on Thursday responded by applying the Senate rules instituted by Harry Reid (NV-D) in 2013.  At that time, Reid pushed through the elimination of the Senate filibuster on executive appointments and lower-court nominees. The “Reid Rule” now applies to Supreme Court nominations as well.

Judge Gorsuch was then confirmed on Friday by a bipartisan 54-45 vote.

While there may be no end to the hypocrisy, rancor, and obstruction that liberal loyalists are willing to inflict on the American political process, all citizens of goodwill can rest assured that in Judge Gorsuch, they have a decent, unbiased, and highly-qualified Supreme Court justice who will uphold the law.

And Second Amendment advocates in particular should sleep more soundly knowing that when the Supreme Court again hears a case on the right to keep and bear arms, Justice Scalia’s seat will be occupied by a man dedicated to ensuring that the Framers’ vision of constitutional freedom is upheld.