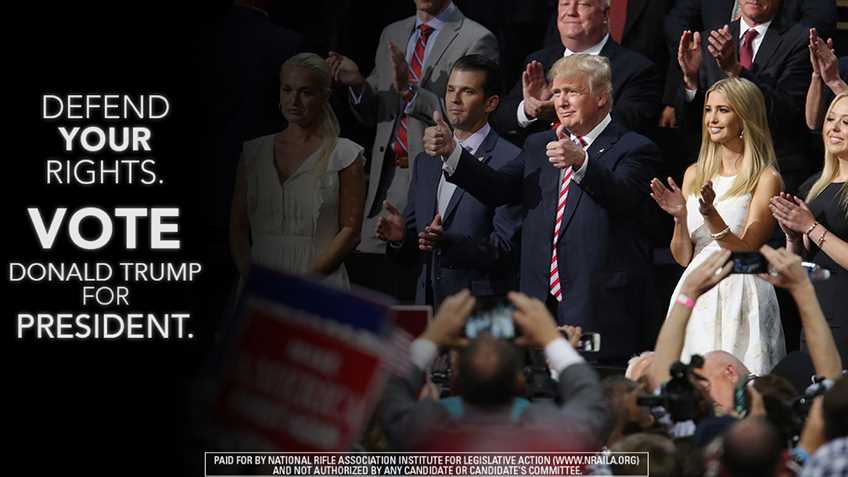 FAIRFAX, Va.— The National Rifle Association today launched a $6.5 million ad buy in support of Donald Trump for President, its largest of the 2016 election cycle. The new ad, titled “Kristi,” tells the real-life story of how the right to self-defense saved an innocent woman’s life. The spot will air on national cable and satellite, as well as regional broadcast in the battleground states of Virginia, Pennsylvania, North Carolina and Ohio.  It also includes an aggressive digital ad campaign.

“This election comes down to my Second Amendment rights – specifically, what happens with the Supreme Court,” said Kristi McMains, featured in the new ad. “Hillary has said she doesn’t think people should be able to decide where and when they are allowed to carry a gun, but I know you can be a victim of a violent crime anywhere at anytime. Without my gun, I would not be alive.”

McMains, a recent law school graduate who had just started a new job, was leaving work when she was attacked in a parking garage shortly after 6 p.m. on Jan. 26. She was able to use the firearm in her purse to fend off her attacker and save her life.

As McMains explains, Donald Trump is the only presidential candidate who will strongly support the Second Amendment rights of law-abiding Americans.

In contrast, a Hillary Clinton presidency would leave victims like McMains defenseless. Clinton does not believe in the fundamental, individual right to keep and bear arms. If elected, she would stack the Supreme Court with anti-gun justices who would overturn our constitutional right to self-protection.

NRA out with biggest ad buy yet to boost Trump