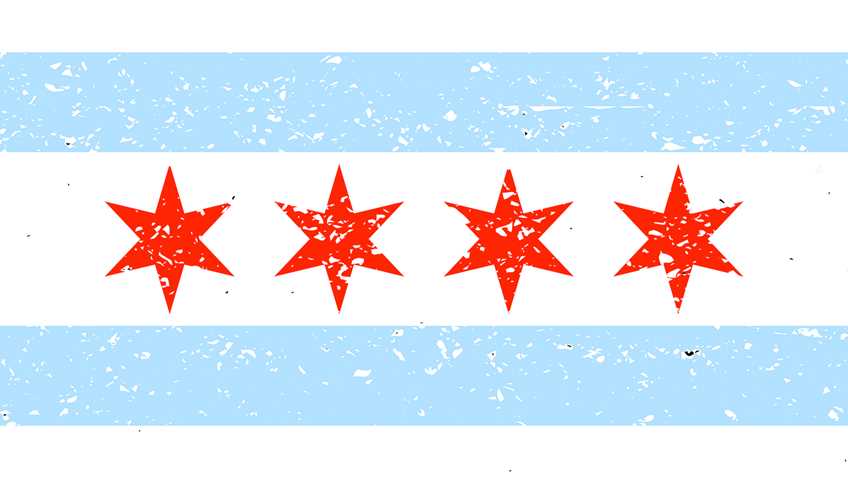 Earlier this month, the young woman was murdered while walking a baby stroller on Chicago’s South Side. Two suspects have been arrested and the additional details are illuminating. The Chicago Tribune reports that one of the suspects “served three years in state prison for 2013 convictions of receiving, possessing or selling a stolen vehicle and for unlawful use or possession of a firearm by a felon, according to Illinois Department of Corrections records. He was paroled in early February. He was convicted in 2011 of aggravated unlawful use of a weapon. He was sentenced to five years on that charge. He also has felony convictions from 2007 for aggravated battery in a public place and aggravated battery causing great bodily harm.” The other suspect “served four years in state prison for 2012 convictions of possession of a stolen vehicle and violating the terms of his electronic monitoring.”

That second suspect, USA Today reports, “was just released from prison two weeks before Friday’s shooting.” ABC reports that “one of the men was wearing an ankle monitor at the time of the shooting and that both men are ‘documented gang members.’”

Chicago Police Superintendent Eddie Johnson characterized the “reprehensible act of violence” by two criminals recently released from prison as “the example of why we need to change the way we treat habitual offenders in the city of Chicago.” Johnson is right about that. Nationally, as the incarceration of criminals has increased, the violent crime rate has decreased. 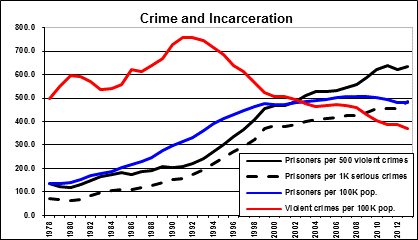 However, Illinois has lagged behind the nation as a whole, in this regard. 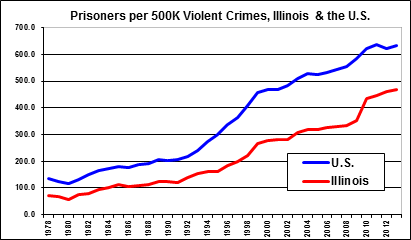 Clinton takes the opposite view, of course, saying that the problem is “excessive incarceration.” In this way, she agrees with President Obama, who, the Washington Times reports, “commuted the prison sentences Tuesday for another 111 federal convicts, including some convicted of firearms violations. The commutations bring to 325 the number of convicts granted clemency this month alone by Mr. Obama. The White House said it was the most commutations by a president in one month ever.”

In stark contrast, Trump has promised to restore law and order if elected president. If he succeeds, it would benefit African-Americans more than any other group, because the per capita murder rate among that group is the highest in the country. While the Census Bureau reports that African-Americans account for 13 percent of the U.S. population, the FBI reports that in 2014, they accounted for 61 percent of murder victims whose racial backgrounds were known.

Obeidallah sees things through the same light-bending lens as Clinton and Obama, saying that if Trump wants to help African-Americans, he “should publicly support universal background checks to close what has been called the ‘gun show loophole.’” However, Obeidallah doesn’t explain how requiring background checks on private transfers of firearms or any of the other expansions of the background check system that Clinton and Obama support would have stopped the two suspects in the murder of the woman in Chicago.

ATF reports that the average time between the first sale of a gun and its recovery by law enforcement agencies if used in a crime is 11.8 years in Illinois. During that time, a firearm could change hands lawfully multiple times, and subsequently be stolen or bought illegally by a straw purchaser. Thefts and straw purchasers are the ongoing Achilles Heels of the background check system, likely accounting for a majority of all firearms acquired by violent criminals.

Obeidallah ignores or is unaware of these facts, saying “federal [gun control] laws are desperately needed to establish nationwide standards.” But a slew of “nationwide standards” already exists in the form of the Gun Control Act of 1968. Several states, including Illinois, impose even more restrictive laws, but as murder rates in many urban areas such as Chicago demonstrate, these misguided policies are not the answer.