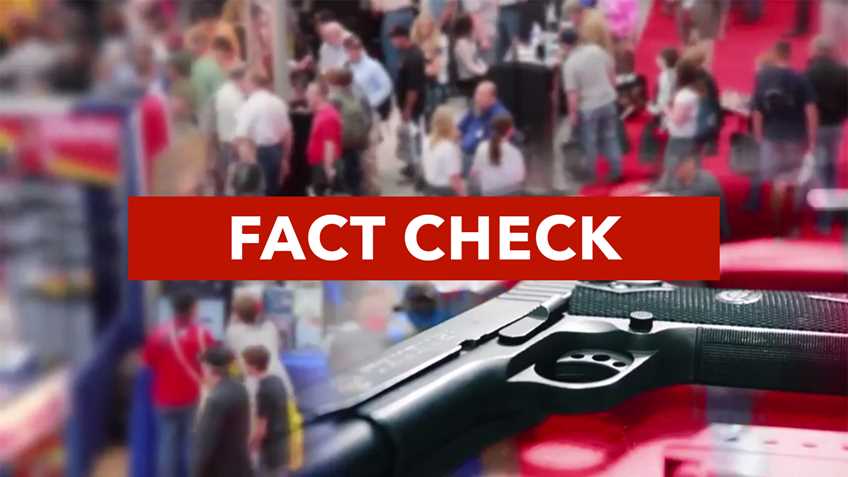 CLAIM: Criminalizing virtually all private firearms transfers will "help prevent future cop killings. In states that have closed the [background check] loophole nearly half as many police officers have been shot and killed in the line of duty."

FACT: This simplistic approach to studying the complex causes of gun violence has been repeatedly debunked.

Politifact cautions against reading too much into correlation

When Politifact fact checked a similar claim by a gun control activist in Virginia, it found this:

" … analysts we contacted urged caution in interpreting a correlation in lower rates of gun violence to private-sale background checks.

"Making causal claims is always riskier," Jacquelyn White, a psychology professor at the University of North Carolina Greensboro, said in an email. "States that require background checks may also be more likely to support other efforts that contribute to the well-being of their residents. Remember, correlation is not causation. There may be other factors, such as a more enlightened commitment to creating healthy and safe communities, that result in an array of programs and policies that reduce domestic violence."

Gary Kleck, a criminology professor at Florida State University, said Everytown's figure "takes no other account of any other factors that affect homicides."

"States do not randomly pass gun laws -- those that pass gun laws are different in many ways from those that do not," Kleck, who has studied the impact of background checks on homicide rates, said in an email.  "For obvious political reasons, it’s easier to enact stricter gun laws in states with fewer gun-owning voters. Thus, states that extended background checks to private gun transfers had lower gun ownership rates even before those laws were passed. Likewise, states with stricter gun laws are more urban, less likely to be Southern or Western (and thus culturally different), more politically liberal etc. You can’t isolate the effect of a gun law without controlling for other violence-related factors."

Economist John Lott, Jr, debunks this and other claims by gun control activists in his new book, “The War on Guns, Arming Yourself Against Gun Control Lies”:

Eighteen other states either currently have universal background checks or had them at some point during the past three decades. . . When you examine all the states, there is no evidence to be found that these background checks affect murder rates.

[U]sing data from all the states from 1977 to 2005, I found that these expanded background checks produced a very small and statistically insignificant 2 percent increase in murder rates.

[B]ackground checks have not been successful in stopping criminals from getting guns.

Many academic studies have failed to produce evidence that background checks on private purchases actually make a difference in reducing violent crimes such as murder and robbery.

Twenty-two of 24 estimates related to changes in the suicide rate and in the murder rate against women and police showed “no change in crimes or suicides as a result of . . . new background checks.” Only two estimates showed statistically significant results. “One showed that states with expanded background checks on transfers had a large increase in police gun deaths. The other showed a relatively miniscule drop in total suicides. But even these results are no longer statistically significant when other factors are taken into account.

The bottom line is that these background checks on private transfers don’t help. Economists, criminologists, and public health researchers have yet to find that the Brady background checks did anything to reduce violent crime. Additional checks aren’t the solution.

Two years ago, Bloomberg gun control advocates used the same false promises of improved safety in Oregon to pass a similar gun control bill there. Less than three months after the law took effect, a young man shot and killed 9 people at Oregon’s Umpqua Community College. The gunman had passed a federal background check. Not long after that, a convicted felon with a long criminal record shot and killed an Oregon police officer in Seaside. The year before not a single police officer was killed in the line of duty. It’s clear that Oregon’s new gun control law did nothing to prevent those crimes or make the people of Oregon any safer.

It’s not just in Oregon where background checks all too often fail to stop criminals from getting guns. The Oregon community college shooter joins numerous other recent attackers and alleged attackers who have passed background checks for their guns.  These include:

Question 1 would criminalize virtually all private firearms transfer in Nevada

Under Question 1, many of the common place activities of Nevada’s law-abiding gun owners will be criminalized. For example, if a person were to loan his shotgun to his fiancé, both of them would be required to go to a federally licensed firearms dealer. The fiancé would have to pay a fee for a background check. When finished with the firearm, the couple would both have to return to a federally licensed firearms dealer, pay another fee and undergo another background check. This is the same process a member of the military who gets deployed overseas would have to go through to store his personal firearms with a friend. The initiative provides a self-defense exception for temporary transfers but only if the victim is facing “imminent death or great bodily harm; and . . . lasts only as long as immediately necessary to prevent such imminent death or great bodily harm.” She couldn’t’ borrow a friend’s pistol to protect herself, unless her attacker was literally standing over her about to attack.