Your Action is Needed NOW! 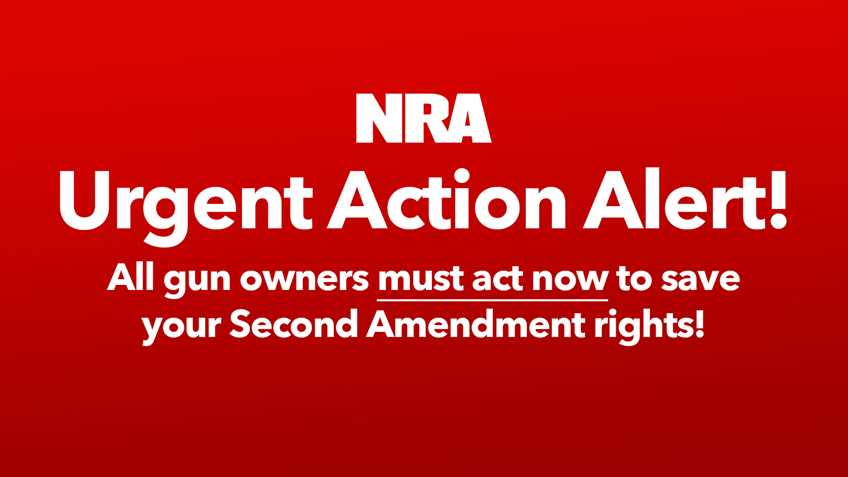 The NRA has just learned that Senators Schumer, Feinstein and other anti-gun elected officials are going to offer several anti-gun bills and amendments this week in the U.S. Congress, possibly as soon as today!

These measures are wide-ranging and include an attempt to reinstate the failed federal ban on semi-automatic firearms, commonly referred to as the “assault weapons ban.”

It doesn’t matter that the Clinton gun ban did nothing to reduce crime.  This is about YOUR freedoms and YOUR Right to Keep and Bear Arms.

But it doesn’t stop there.  In fact, one amendment will attempt to strip the Second Amendment Rights from those on secret government lists while another could lead to federal registration of all gun owners.

They're also planning to push for increased federal funding of anti-gun research.

We must defeat every one of these anti-gun proposals.

What’s obvious is that many who want to destroy our firearm freedoms are using the terrorist attack in Orlando to push their anti-gun agenda.

They’d rather blame you as a law-abiding gun owner than make Obama answer for his failures in the global war on terror.

We can’t let them succeed in this depraved attempt to politicize a tragedy so they can destroy our freedoms.

Please contact your U.S. Representative and U.S. Senators immediately and let them know you oppose any new gun control measures. You can call your lawmakers at 202-225-3121 or click the “Take Action” button below.

Be sure to share this message with your fellow NRA members and gun owners and let them know this threat is real.  Your action is needed now.

Huffington Post: The NRA Has Actually Got Something Right On Gun Control