If Hillary Clinton were to achieve her dream of capturing the White House in November, she would use her vast power to erase American liberty as we know it. Hillary’s record in targeting the First and Second amendments—the two amendments that inseparably protect all of our freedoms—sets her apart as the most anti-freedom candidate to run for the White House.

Hillary has openly said that the U.S. Supreme Court, which has twice unequivocally affirmed the individual right to keep and bear arms, “is wrong on the Second Amendment.” And referring to the NRA, she bragged about her plan to “take back the Second Amendment from these extremists.”

“Take back” a right guaranteed by our founders to every peaceable American? The Second Amendment says, “the right of the people,” not the right of Hillary. And there is nothing extreme about protecting American liberty—a cause we NRA members embrace every day.

“Take back?” Those words are akin to “buy back,” the term she used to describe Australia’s mass firearm confiscation that saw nearly a million registered firearms taken from licensed owners. Those legally owned guns were declared contraband, then taken, chopped and torched. “Buy back?” In reality, it was theft by government, an act now espoused by Hillary Clinton.

In a key moment of a New Hampshire “town hall” campaign stop, Hillary was asked: “Recently, Australia managed to get away, or take away tens of thousands, millions of handguns. In one year, they were all gone. Can we do that?”

Without hesitation, she said, “It’s worth considering.” In Hillary’s world, “worth considering” means just doing it. Wielding the immense power of the presidency, she would order an “assault weapons” ban and decree as law a “universal” background check with its defacto licensing and registration—both pillars of her gun-ban platform.

The Australian plan used the catch-all term “assault weapons” to allow for the confiscation of all semi-automatic rifles and semi-automatic and pump shotguns. Everything from Ruger 10/22s to Remington 870s. Firearms registered to licensed law-abiding citizens were seized and destroyed.

A friend of mine who lives in Australia provided an indelible message that is the key to everything Hillary and her cabal plan with their step-at-a-time agenda. My friend issued this warning: “Don’t let them register your guns. If they know you have them, then they can come and take them!”

Australia forever proves that confiscation is the endgame that begins with registration and licensing. Hillary knows it and embraces those twin evils. She told “Meet The Press,” “Everyone who wishes to purchase a gun should have a license, and that every handgun sale or transfer should be registered in a national registry.”

Hillary’s obvious contempt for the Second Amendment and for Americans who fight to keep that right intact is matched only by her disgust for the freedom of assembly and free speech that are central to preserving liberty.

Hillary has pledged to rewrite the First Amendment to ban expenditures for purely political speech—the heart of the grassroots effectiveness of the NRA.

She fears the concept of the right of the people to assemble around political ideals and constitutional principles. She fears the ability of individual Americans to pool their funds to communicate those ideas. She loathes the notion that constitutionally protected assemblies like the NRA can use free speech to protect the rights of all Americans.

I hear people saying that Hillary won’t have the power to amend the Constitution if she’s elected, but with just one or two political appointees, she and other anti-gun elites will own the U.S. Supreme Court.

As it stands, the Second Amendment hangs by the balance of one seat on the high court. In both Heller (which struck down the Washington, D.C., law prohibiting handgun ownership and armed self-defense in the home) and McDonald (which extended the right to keep and bear arms to the rest of the nation by striking down Chicago’s gun ban), the court was split five-four.

But over the next four years, there could likely be at least four vacancies on the high court. If it’s a Hillary hand-picked court, our nation as we know it could be sunk.

With a Hillary-controlled Supreme Court, the Constitution will be shredded and our liberty will be destroyed.

Such a Supreme Court would wipe out the separation of powers and render Congress meaningless. Executive lawlessness would rule the day.

In past elections, the NRA has been the force that tipped the balance and saved the nation. As a key leader in our fights, you have done more for the cause of freedom than most Americans will do in a lifetime. None of us can win this election alone, but one by one we can and will make a difference. This is our fight. Our time. The moment to take our freedom back.

To save our liberty for our children and grandchildren, we must be more active, better organized, and stronger than ever in preparation for the November 2016 election.

I recently wrote to you asking annual members to renew or upgrade your membership, and for Life members to step up to a higher membership level. To answer freedom’s call, sign up family members and friends for gift memberships to help build our fighting force. Nothing could be more important than strengthening our numbers and resolve to save our great nation and the freedoms we cherish.

If you haven’t yet responded, please do so today.

At this point in the NRA’s history, in American history, your courage, your strength and your determination to fight alongside the NRA has never been more important.

Please answer my call to action. With the coming elections, it’s now or never in the most important battle for liberty we will ever fight!

Texas Governor to Obama on Executive Gun Control: ‘COME AND TAKE IT’ 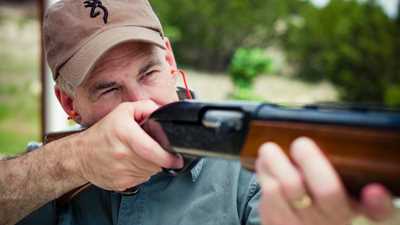