The following news article explains why Pinellas County, Florida, citizens and gun owners all over the state are expressing concern over comments made by Pinellas County Sheriff Bob Gualtieri in a story by the News Service of Florida yesterday, 12/10/15.

In my humble opinion, it appears as though Pinellas County Sheriff Bob
Gualtieri may be ready for the rubber gun squad.

The good sheriff said Thursday that law abiding citizens exercising their
Second Amendment rights will be “thrown down on the ground with a gun pointed at them — or worse.”

He also said if a concealed carry unknowingly enters a bank during a robbery,
the citizen is “going to take one in the chest because he’s a threat.”

In May of 2013, he vowed to start enforcing a little-used county ordinance
that requires background checks at local gun shows for all private sales. The
county ordinance gathered dust since it was enacted in 1998. Violators faced
misdemeanor charges. After garnering a few headlines, the plan fizzled. Gun
shows were held without any problems. No arrests were ever made.

A year later he called the Firearms Mandatory Evacuation bill — which is now
law — “crazy” and “absurd,” saying it would allow people to carry concealed
firearms into a riot, rather than when they’re fleeing their homes.

And he’s been fighting the open-carry legislation with bad info.

A county sheriff who’s threatening to shoot his constituents for exercising
their Second Amendment rights is a worrisome situation, which I hope gets
whispered into the ear of Gov. Rick Scott.

The governor needs to take swift action now, before a law abiding Pinellas
County resident is “thrown down on the ground with a gun pointed at them — or
worse.”

The sheriff’s statements constitute official sanction for his deputies to use
excessive force — or even deadly force — on gun owners.

And quite frankly, that should scare the hell out of everyone who lives in
Pinellas County, regardless of whether they own or carry a gun.

Here’s the story from the News Service of Florida that details the sheriff’s
threats:

By MARGIE MENZEL
THE NEWS SERVICE OF FLORIDA

THE CAPITAL, TALLAHASSEE, December 10, 2015……….Acknowledging “momentum” behind a proposal that would allow people with concealed-weapons licenses to openly carry guns, the Florida Police Chiefs Association said Thursday its board of directors had voted to back the controversial measure — as long as changes designed to protect law-enforcement officers are included.

A spokeswoman confirmed that the police chiefs’ group had contacted the sponsors of the proposal (SB 300/HB 163), Sen. Don Gaetz, R-Niceville, and his son, Rep. Matt Gaetz, R-Fort Walton Beach, who both say they’re on board with the changes.

“The police chiefs understand that momentum is building,” association spokeswoman Sandi Poreda said. “And because of their concerns for police officers’ safety, they wanted to go ahead and reach out to the bill sponsors and work on these amendments, which they believe will better protect officers.”

If the measure passes, 1.45 million Floridians with concealed-weapons permits would be able to openly carry guns. Opponents — including a number of Florida sheriffs — warn that people who openly display guns could get hurt as a result, either by criminals or law enforcement.

Gun bills will be heavily debated during the 2016 legislative session, which starts Jan. 12. Along with the open-carry proposal, lawmakers are looking at allowing people with concealed-weapons licenses to carry guns on college and university campuses and are considering a proposal to shift a burden of proof in “stand your ground” self-defense cases.

By a vote of 15-7, the police chiefs association’s board of directors — who represent law-enforcement agencies in different districts of the state — agreed to support the open-carry bill when the amendments are adopted.

In a “Red Alert” email Wednesday to association members, Executive Director Amy Mercer cautioned that the police chiefs’ group “reserves the right to oppose the bill in the future, particularly if our amendments are changed or removed or if other amendments are added that are found not to be in the best interest of the FPCA and our members.”

Lawmakers will consider four proposed amendments, which have not yet been filed.
One amendment would add a provision to the Senate bill. The amended version would include House language stating that a person who displays a firearm “intentionally … in an angry or threatening manner, not in necessary self defense” is not covered by the proposed open-carry law.

Second, both current versions of the proposal would allow fines to be imposed on people — including police officers — who infringe on others’ rights to openly carry guns, unless probable cause exists to believe that crimes have been committed. A proposed amendment would ease that standard for law officers, who would be required to have “reasonable suspicion” before stopping people to verify or investigate the carrying of guns.

Third, the current proposal states that no one who infringes on the right to openly carry guns — including police officers — would be immune from legal consequences.

However, the agreement between the Gaetzes and the police chiefs association specifies that nothing in the bill would be intended to restrict a law enforcement officer’s ability or authority to conduct investigations as otherwise allowed by law.

“Sovereign immunity is a vital tool that allows law enforcement officers to perform their duties without fear of frivolous lawsuits,” Mercer wrote. “Officers will not fear losing sovereign immunity when investigating a person open or concealed carrying.”
The fourth amendment would require a holster for purposes of openly carrying a firearm.

The original versions of the bills have started moving through House and Senate committees. Matt Gaetz said Thursday he expects the changes to be added when lawmakers return to the issues after the first of the year.

The Florida Sheriffs Association would not comment Thursday. But Pinellas County Sheriff Bob Gualtieri, a staunch opponent of open carry, said the four amendments wouldn’t make the bill acceptable to him — or safe for people who openly display their guns.

For instance, he said, if an officer arrives at the scene of a crime and sees someone with a weapon, “At a minimum, they’re going to be thrown down on the ground with a gun pointed at them — or worse.”

And if good citizen with a concealed weapon walks into, say, a bank during an armed robbery, Gualtieri added, “he’s going to take one in the chest because he’s a threat.”

Don Gaetz, however, pointed to the emerging differences between opponents such as Gualtieri and the police chiefs association.

“Well, he now will have the opportunity to debate that issue with his fellow law-enforcement officers who are taking a different view than he is,” Don Gaetz said.
National Rifle Association lobbyist Marion Hammer, who strongly backs the measure, dismissed the critics.

“That’s rhetoric. That’s reaching,” she said. “Every time we do something to protect the rights of law-abiding gun owners, somebody will come up with a ‘what if?’ " 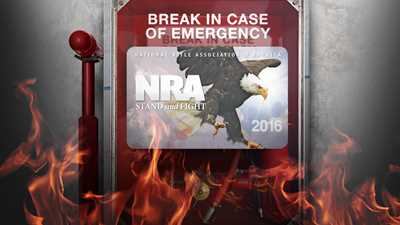