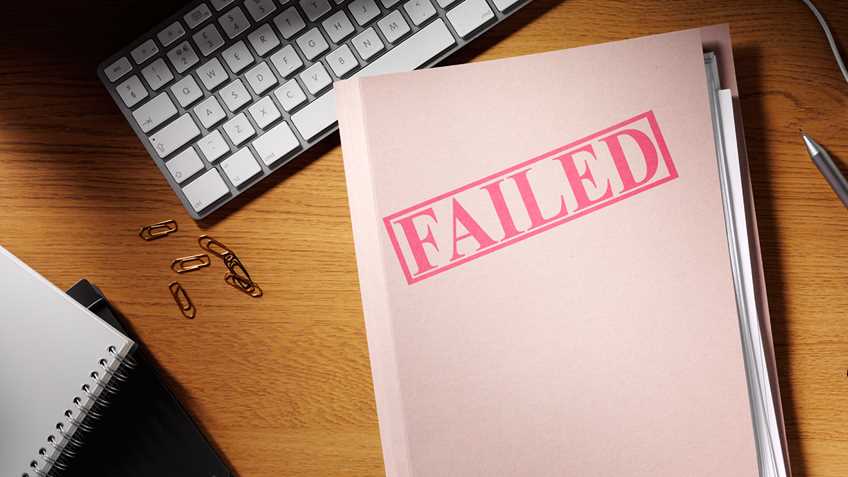 A recent report from NationalJournal.com demonstrates why increasingly frequent “studies” from media organizations, claiming to validate one or another anti-gun viewpoint, should be recognized for the agenda-driven pablum that they are.

On August 28, the website published an article by graphic artist Libby Isenstein, the thesis of which is evident in its title, The States With The Most Gun Laws See The Fewest Gun-Related Deaths.

Isenstein set the tone of her article at the outset, repeating an anti-gun website’s claim that there have been “more than 200 mass shootings in 2015.” In doing so, however, Isenstein forfeited any credibility she might otherwise have been assumed to possess. With a few seconds of research, she could have determined that only 14 percent of the firearm-related incidents currently cited by the website were “mass shootings,” traditionally defined as murders, with a firearm, of four or more victims, in a single incident, in close geographical proximity. Thirty-seven percent of the incidents had no fatal victims whatsoever. She could have also found leading criminologist James Alan Fox’s recent assessment, following a review of the most comprehensive study of mass shootings to date, that the report “should calm the fears that many people have that these numbers are out of control” and that “No matter how you cut it, there’s no epidemic.”

Isenstein confined the rest of her article to comparing gun control and firearm-related deaths, but she made so many mistakes that we feel we should apologize in advance for the length of our response, which follows.

1. Mere correlation, even if one existed, wouldn’t necessarily mean causation. Isenstein claimed that there is a “correlation” between gun control laws and firearm-related death rates. However, even if there were such a correlation, it wouldn’t necessarily mean that gun control reduces deaths. If it were that simple, it could be claimed that roosters crowing at dawn proves that crowing causes the sun to rise.

2. In looking for a correlation, Isenstein didn’t consider any other factors that might affect a state’s level of firearm-related deaths. Common sense notwithstanding, had she performed even a modicum of research, she would have found that gun control isn’t on the FBI’s list of 13 factors that affect crime rates. Furthermore, since she was able to locate data from the Centers for Disease Control and Prevention (CDC), including data for suicides, she might also have stumbled upon the CDC’s list of 15 “risk factors for suicide.” Indeed, one of those 15 risk factors is “easy access to lethal methods.” However, half of suicides are committed without firearms, and from 1981 through 2013—all years of data available on the CDC’s website and a period during which the number of firearms owned per capita increased over 60 percent—the firearm suicide rate decreased five percent, while the non-firearm suicide rate increased 27 percent.

3. Isenstein failed to note that self-defense homicides are included in the CDC’s count of firearm homicides. Even the FBI’s far more reliable data (published in FBI Violent Crime Table 4 and Table 20, and Expanded Homicide Data Table 8) unavoidably include defensive homicides. Highly-regarded Florida State University criminologist Gray Kleck has written, “[f]or a variety of reasons, the FBI counts of civilian justifiable homicides represent only a minority of all civilian legal defensive homicides.” Perhaps such concern was inconsequential to Isenstein because gun control supporters see no distinction between defensive homicides and the criminal variety.

Isenstein also incorrectly characterized as a “loophole” the absence of a background check requirement on private transfers of firearms. Had she researched the matter, she would have learned that the federal Gun Control Act of 1968 imposed recordkeeping and similar requirements upon firearm dealers, and extended that requirement to background checks beginning in 1994, but has never imposed such requirements upon private individuals. In proposing background checks on private firearm transfers, gun control supporters aren’t trying to “close a loophole,” they’re trying to create, at the federal level and in many states, an entirely new form of regulation and data-keeping on gun buyers where none existed before.

Furthermore, Isenstein claimed that “an estimated 40 percent of gun sales in this country are made via unlicensed sellers.” This suggests that Isenstein should spend more time reading the news than trying to create it, because the “40 percent” claim has been discredited by the Washington Post here, by the Richmond Times-Dispatch here, and by FactCheck.org here, over a period of several years, and it has been disavowed by the authors of the study on which gun control supporters nevertheless continue to pretend their bogus claim is based.

Isenstein also parroted gun control supporters’ misleading claim that background checks aren’t required on people who purchase guns “online.” As we have said many times, federal law, 18 U.S.C. 922(a)(3) and (5), prohibits a person who is not a licensed dealer from providing a gun to a non-dealer resident of another state, and prohibits a person who resides in one state from receiving a firearm from a non-dealer who resides in another state, unless the transaction goes through a dealer, at which point a background check will transpire.

Isenstein also mentioned gun shows and in this instance we have to give credit where credit is due. Whereas gun control supporters claim that background checks aren’t currently required on any firearm sales at gun shows, Isenstein correctly made clear that firearm dealers are already required to conduct checks at shows.

7. Isenstein incorrectly categorized two states relative to Right-to-Carry laws. She miscounted Connecticut as a restrictive carry permit state (it has had a fairly-administered discretionary-issue law since 1949) and miscounted Illinois as having a Right-to-Carry law in 2013 (Illinois adopted an RTC law in 2013, but it didn’t take effect until 2014).

8. Isenstein used only a single year of CDC data. This can present two problems. First, in any low population state that has relatively few deaths, a very small increase or decrease in the number of deaths estimated by CDC from one year to another translates into a large increase or decrease in the state’s per capita rate of those deaths. Second, in any given year, the number of firearm homicides in such a state can be so small that the CDC will not estimate a number. In 2013, the year of data Isenstein used, that was the case for 11 states.

9. Isenstein’s use of only 2013 data favored states that have more gun control. Based upon the second problem described in the preceding paragraph, Isenstein entirely excluded from her comparison the 11 states for which the CDC didn’t report firearm homicide data in 2013, all of which have historically had relatively low populations, relatively low firearm homicide rates, and relatively little gun control. To wit, nine of the 11 that she excluded have Right-to-Carry laws (versus two that don’t), nine don’t impose an expanded background check requirement (versus two that do), and six have Stand Your Ground laws (versus five that have “duty to retreat” laws).

We categorized the states correctly and, to get hard numbers for every state for 2013 (rather than excluding 11 states, as Isenstein did), we performed calculations using superior data published by the FBI. In doing so, we found that in 2013, Right-to-Carry states had a 20 percent lower total murder rate. We also ranked the states and the District in terms of their murder rates, and found that those with restrictive firearm carry laws had among the highest and lowest, and had some in the middle of the ranking. Where the restrictive group is concerned, the District had the highest rate and, among the states, Maryland ranked 4th, Illinois 11th, California 21st, New Jersey 22nd, Delaware 24th, New York 30th, Rhode Island 33rd, Massachusetts 42nd, and Hawaii 49th. 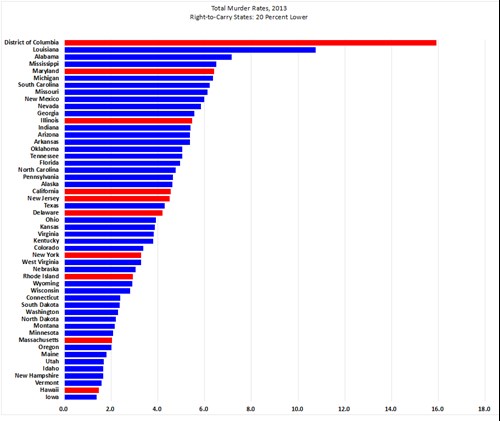 We also found that Right-to-Carry states had a 29 percent lower firearm murder rate, as compared to the restrictive group. We should note, the second calculation was slightly problematic, in that in 2013, Alabama reported the weapon used in only a very small percentage of its murders and Florida reported the weapon for none. For those states, we assumed that 69 percent of each state’s murders involved firearms, based upon the FBI’s reporting of that figure nationally for 2013. For any other states that reported less than 100 percent, we used simple projections based upon the reports they submitted. 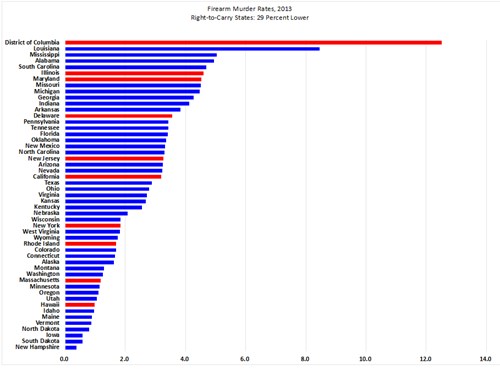 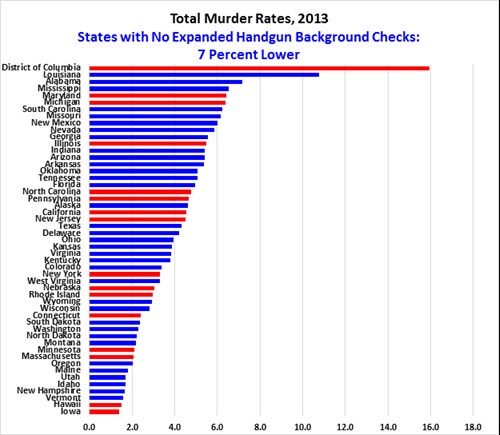 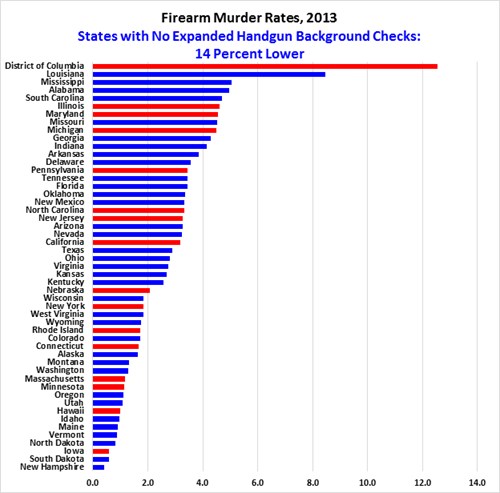 In the future, we hope everyone will take as critical a look at anti-gun “studies” as we have with this one. Doing so would ultimately save a lot of Americans’ time and energy, currently being wasted and distracted by anti-gun culture warriors masquerading as investigative journalists. 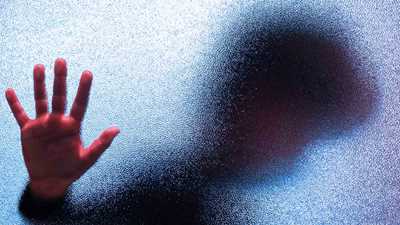