The Trace: Just Another Effort to Mislead America 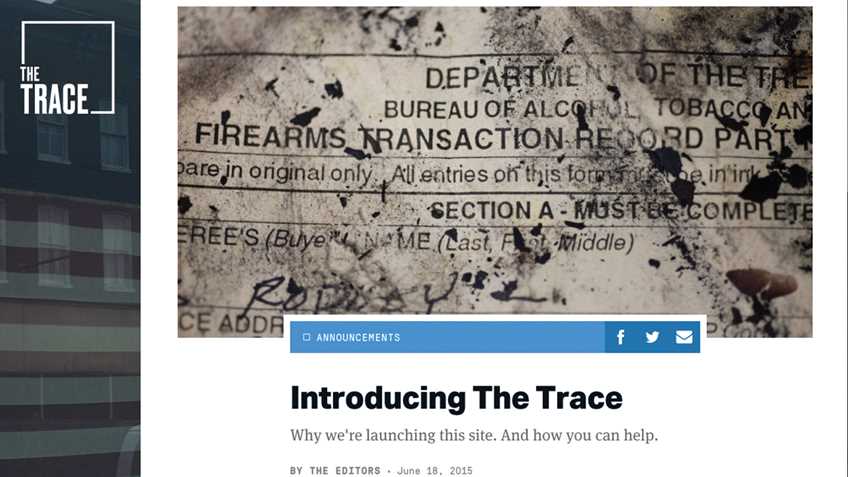 One recurring truth about the anti-gun movement is how often they try to create new organizations which claim “neutrality” or “moderation” on the Second Amendment, but in reality are nothing more than carbon copies of all the anti-gun groups that have come before them.

As we reported a few weeks ago, fanatically anti-gun Michael Bloomberg has found a new venture to pour his money into.  It’s called “The Trace”, which claims to be a fair news organization devoted to researching “gun violence.” The head of the new group, former New Republic Magazine editor James Burnett even went as far as to suggest the group will not publish editorials supporting specific legislation or candidates, but simply provide information and news stories in opposition to “gun violence.”  But let’s look at reality.

First, the group has no need to endorse specific legislation or a given candidate to achieve their anti-gun goals.  All they have to do is gin up “news” or biased “analyses” that provide specific anti gun messaging which supports whichever draconian law is Bloomberg’s favorite flavor of the day at the national or state level.  Obviously, this information will then provide the foundation for countless more news stories from the anti-gun press, countless more anti-gun legislative initiatives, and countless more talking points for anti-gun candidates to use when running for office.  And this is exactly what “The Trace” will work tirelessly to make happen.

And we can’t forget who is making this all possible. “The Trace” is funded not only by Bloomberg, but also by the famously anti-gun Joyce Foundation and the cofounder of the reliably anti-gun Huffington Post. With financial support like that, does anyone believe that there will be any information from “The Trace” that is anything other than anti-gun propaganda?

Burnett stated that “The Trace” is needed because there is not enough anti-gun violence coverage in the media.  One wonders if he has ever read the New York Times, Washington Post, Chicago Tribune, or any one of a number of big city newspapers that attack our Second Amendment rights on a regular basis.  Or perhaps he does not have cable TV and so is not exposed to anti-gun coverage on CNN or MSNBC.  It sounds more like Editor Burnett lives where pigs fly and unicorns win the Kentucky Derby.

There can be no doubt that Bloomberg and his allies are focusing resources towards an all-out assault on our rights with “The Trace” simply another move to fulfill their broader mission.  As subverting the truth to achieve their goals has been well established as a tactic of choice, we can expect the same from “The Trace.”  NRA-ILA will not let their lies and distortions go unanswered, and together we can stand up to Bloomberg and his media allies, especially when he stacks the deck against freedom in such an unmitigated and craven way.