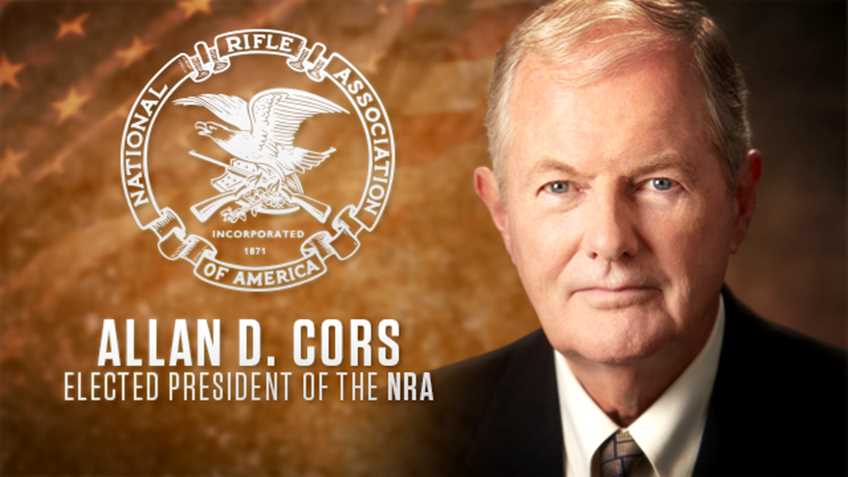 Nashville, TN – Allan D. Cors of Naples, Florida was elected by the National Rifle Association Board of Directors as President of the historic 144-year-old Association. The election took place in Nashville, Tennessee following the 144th Annual Meeting of the NRA where 78,865 members attended the 3-day celebration - the second highest number ever. A lifelong hunter and competitive shooter with a passion for collecting World War II military vehicles, Cors has served as president of the NRA Foundation and is a member of the NRA’s Executive Committee. He was a principal advocate for the establishment of the NRA’s Political Action Committee. Cors served as a counsel with the Judiciary Committee in the U.S. House of Representatives. He also served as the director of government affairs and senior vice president at Corning for 34 years.

"I am humbled by the support of my fellow 5 million-plus NRA members and 75 board members. At a time when our country is disillusioned with government and its leaders, the public’s faith in the NRA has never been stronger,” said Cors. "This trust is a result of the NRA’s steadfast loyalty to upholding the Second Amendment and it is a testament to the diligence and prescience of Wayne LaPierre – a man who has dedicated his life to the NRA."

The board of directors also re-elected Wayne LaPierre as NRA's executive vice president. LaPierre has served in this leadership role since 1991 and has spearheaded NRA's efforts to restore the relevance and sanctity of the Second Amendment. Under his leadership, the NRA has grown to unprecedented levels and is widely acknowledged as the preeminent force in American politics. Upon his re-election, LaPierre reappointed Kyle Weaver to the position of executive director of NRA General Operations and Chris W. Cox to the position of executive director of NRA Institute for Legislative Action.

Pete Brownell of Montezuma, Iowa was elected first vice president. Brownell, who previously served as NRA second vice president, is also the current chairman of the National Association of Sporting Goods Wholesalers (NASGW), an active member of the U.S. Army’s Command and General Staff Foundation Board, and vice chair of the Iowa Economic Development Authority Board. He is a married father of three children, and an accomplished runner and hunter.

Wilson Phillips was re-elected by the NRA Board of Directors to serve as treasurer.