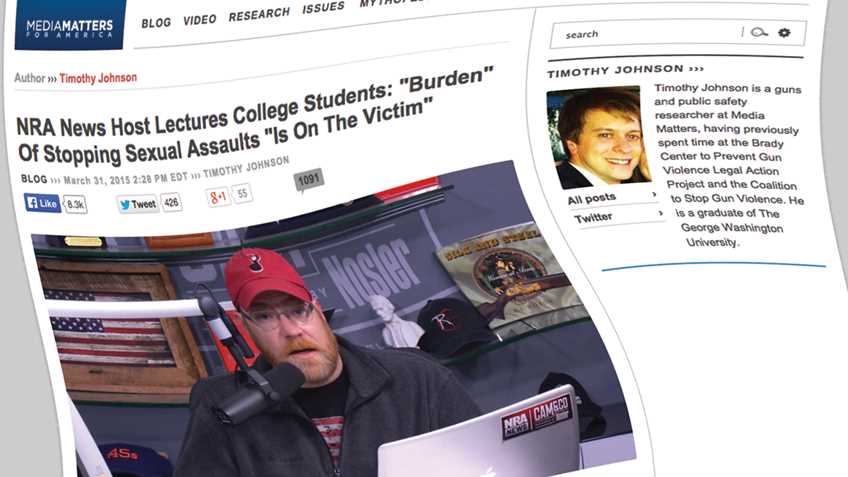 On Tuesday, Media Matters' Timothy Johnson, who dabbled at the Brady Campaign and the Coalition to Stop Gun Violence when he was in college, attacked NRA News’ Cam Edwards for his statements on women’s self-defense. Johnson took issue with Edwards’ observations that rape prevention programs and “intervention training” offer no guarantees and that women who are violently attacked on campus may have to depend upon themselves for protection.

Edwards was responding to an editorial that appeared last month in the University of North Carolina at Chapel Hill student newspaper, the Daily Tar Heel. The editorial said, “To reduce sexual assault, focus should be maintained on preventative programs that challenge rigid gender roles and promote healthy relationships.” Allowing women to carry guns for protection “would be yet another excuse to blame victims for their own assaults,” would “not address the causes of sexual assault,” and “could reinforce rape culture because the burden of stopping assault would be further placed upon women.”

In what appears to be a coordinated messaging campaign, the same anti-self-defense rhetoric was repeated by purported anti-rape activists Annie Clark, a co-founder of End Rape on Campus, and Sandra Park, of the American Civil Liberties Union Women’s Rights Project, in an interview with CBS News. Clark, a former UNC student who writes for the leftwing news entities Huffington Post and MSNBC, and who formerly worked with anti-gun Sen. Kirsten Gillibrand (D-N.Y.), told CBS, “I think we should be talking about the perpetrators. Telling women to carry guns, first of all puts the burden on the woman to prevent this and secondly, it’s not a solution.” Park added, “If we are saying the victims need to have guns so they can protect themselves, we’re returning the burden onto the victims to somehow be able to individually fight off the offense.”

Leave it to Media Matters and other anti-gun stalwarts to argue that armed self-defense, a form of empowerment for all people, is its own form of oppression. By that reckoning, nature itself sought to belittle and shame animals by equipping them with teeth, claws, and quills to deter and resist larger, stronger, more aggressive predators. While prevention efforts are fine, as far they go, no reasonable person would suggest that they can completely eliminate every risk of deadly assault. Apparently, however, Johnson and his like-minded cohorts believe that forcing women to hazard such attacks without even the option of defensive force is fair price to pay for ensuring that other prevention efforts get due priority.

Johnson also incorrectly insists, “There is no evidence that guns on campus would reduce the incidence of sexual assault.” To the contrary, Florida State University criminologist Gary Kleck’s analysis of crime victim survey data showed that “rape victims using armed resistance were less likely to have the rape attempt completed against them than victims using any other mode of resistance.”

Johnson’s ideal of a peaceful, egalitarian society may be appealing, but he’s obviously more attached to those ideals than the actual safety of real women in the real world. Wishful thinking, to say nothing of willful denial of current reality, never protected anybody from anything. Cam Edwards is right: female college students should be able to decide for themselves whether or not armed self-defense is among the options they may choose to provide for their own self-defense.  That Johnson and others would deny women even that choice and insist that they depend on the help or solicitude of others for their safety shows little regard for their judgment, capabilities, or even their lives.