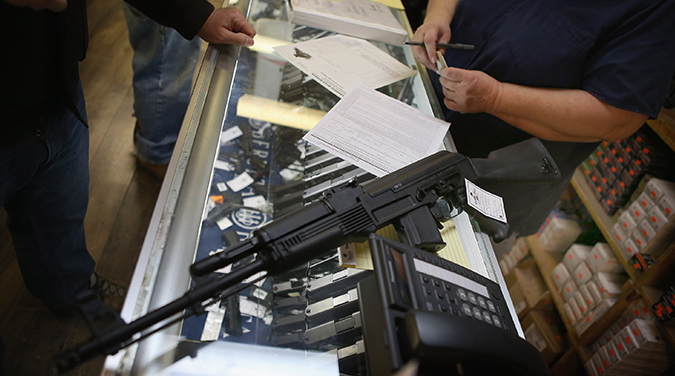 On June 16, 2014, the United States Supreme Court issued an opinion in the case of Abramski v. United States. The ruling seemingly allows the government to require virtually any information it wants from a person buying a firearm from a federally licensed dealer, whether or not that information has any relationship to public safety or the policies of federal law.

Abramski, a former policeman, was given money by his uncle to buy a gun on the uncle’s behalf. The apparent benefit to the uncle was that Abramski could obtain the gun at a lower price than the uncle himself could.

Abramski bought the gun from a federally licensed firearms dealer (FFL), completed the required paperwork, and successfully underwent a background check. Because his uncle lived in another state, Abramski could not lawfully transfer the firearm directly to him. He therefore gave the firearm to an FFL in his uncle’s state of residence, and the uncle then received the firearm through that FFL. This meant Abramski’s uncle completed his own transfer paperwork and went through his own successful background check. The government did not allege that either party was prohibited or had any intention of thwarting prohibited person laws.

The legal question in the case was whether Congress intended for this to be crime under two provisions of the federal Gun Control Act (GCA). The first prohibits knowingly falsifying information “material to the lawfulness of the sale” of a firearm by an FFL. The second prohibits knowingly falsifying information that an FFL is required to keep in records mandated by the GCA. The practical question in the case was whether the ends of the GCA – keeping firearms out of the hands of presumptively dangerous persons – was served by this prosecution or the government’s reading of the law.

Under regulations created by the Bureau of Alcohol, Tobacco, Firearms and Explosives (BATFE) to implement the GCA, a person who acquires a firearm from an FFL must complete a Form 4473 and answer a list of questions on the form. Some of the questions ask if the person falls into various categories of so-called prohibited persons. Such categories are set forth in the text of the GCA itself, and persons within them may not lawfully possess or receive a firearm because they are presumed to pose a heightened risk of dangerous or unlawful behavior. The form also asks, however, if the person is the “actual buyer” of the firearm. Nothing in the GCA specifically addresses or mandates this question.

The government claimed Abramski violated the law because he falsely indicated on the Form 4473 that he was “actual buyer” of the firearm, when he knew that the firearm was being bought by money provided by his uncle and for the ultimate receipt of his uncle.

BATFE justifies the “actual buyer” question on the basis of preventing “straw purchases,” in which one person buys a firearm on behalf of another.  Yet straw purchasing laws are designed to keep people from acquiring firearms on behalf of criminals or dangerous persons.  As Abramski noted to the Court, prior to 1995, even BATFE did not consider one person obtaining a firearm on behalf of another as a material violation if the intended recipient was not prohibited.

According to Justice Kagan’s opinion, however, the governmental interest at stake in the case is that a non-prohibited person might want to go through a straw purchaser if the non-prohibited person wants the gun for an unlawful purpose. This is because if the gun is ultimately recovered at a crime scene, it would be traced back to the straw purchaser, not to any subsequent “off the books” recipient.  By a five to four margin, the Supreme Court upheld Abramski’s conviction for violating both provisions of the GCA.

In this case, however, Ambraski’s uncle ultimately received the firearm through an FFL. In other words, his purchase was not off the books. He himself would be on record as receiving the firearm from the FFL in his state of residence.

Justice Antonin Scalia wrote a vigorous dissent, which was joined by Chief Justice John Roberts, and Justices Clarence Thomas and Samuel Alito. Scalia argued that “the government interprets [the GCA] to punish conduct that its plain language simply does not reach.”

In refuting the majority’s argument that the GCA should be read to regulate beyond the initial purchaser interacting with the dealer, Scalia noted, “We interpret criminal statutes, like other statutes, in a manner consistent with ordinary English usage.” Scalia went on to explain, “In ordinary usage, a vender sells (or delivers, or transfers) an item of merchandise to the person who physically appears in his store… So if I give my son $10 and tell him to pick up milk and eggs at the store, no English speaker would say that the store ‘sells’ the milk and eggs to me.”

Taking issue with the majority’s contention that the purposes of the GCA would be severely undermined were people able to buy guns on behalf of others, Scalia cited examples in which the federal government does not consider such an act a violation of the GCA. These include guns intended as gifts, guns intended for resale, and guns intended for raffle prizes. Scalia adds, “If the statute’s requirements were ‘rendered meaningless’ by treating Abramski rather than his uncle as the true purchaser, then they would be every bit as meaningless in the scenarios just described.”

Scalia’s dissent also pointed out that the BATFE has not always held the position that Abramski’s conduct was unlawful. Scalia notes that BATFE did not take its current position on the matter until the 1990s. He also pointed out the majority’s error in ignoring this fact, stating, “the fact that the agency charged with enforcing the Act read it, over a period of roughly 25 years, not to apply to the type of conduct at issue here is powerful evidence that interpreting the Act in that way is natural and reasonable and does not make its requirements ‘meaningless.’”

Regarding the matter of whether Abramski falsified information that is required to be kept in a dealer’s records, Scalia noted the question Abramski falsified is not information the GCA requires FFLs to keep. Scalia outlined the unsettling nature of the majority’s position, stating, “On the majority’s view, if the bureaucrats responsible for creating the Form 4473 decided to ask about the buyer’s favorite color, a false response would be a federal crime.”

The NRA Civil Rights Defense Fund participated in the case before the Supreme Court by filing a friend of the court brief. The brief emphasized the lack of statutory authority for the “actual buyer” question at issue in the case. It also argued that the government’s position in the case ignored the fact that Congress’ intent in enacting the GCA was to prevent the transfer to and possession of firearms by persons Congress had statutorily classified as “potentially irresponsible and dangerous.” On the other hand, the brief noted, “Congress did not intend to per se prohibit the purchase of a firearm by an individual on behalf of another.” The brief additionally pointed out BATFE’s own inconsistent interpretations of whether the purchase of a firearm by one party on behalf of another constitutes an illegal straw purchase when neither is a prohibited person.

IN THIS ARTICLE
U.S. Supreme Court straw purchasers Background Checks/NICS
UP NEXT x

Amid the Anti-gun Hysteria of the Democrat Primary, NICS Sets Another Record