Last weekend marked the 10-year anniversary of the federal “assault weapon” and “large” magazine bans’ expiration. True to form, gun control supporters reacted by mischaracterizing what the bans did and by attempting to conceal their plans for future restrictions. For those keeping track, the bans were imposed on September 13, 1994, and expired 10 years later.

Trying to save face, Sen. Dianne Feinstein (D-Calif.), who sponsored the bans, issued a press release claiming that they had “worked.” However, her claim is based upon mischaracterizations of BATFE firearm tracing data and the congressionally-mandated study of the bans. She also lied about her legislative intentions, claiming she’s interested only in “reinstating” the bans when her current legislation would instead expand the bans to include all semi-automatic shotguns and detachable-magazine semi-automatic rifles and tighten restrictions on magazines. (See NRA-ILA S. 150 Fact Sheet.) Rep. Carolyn McCarthy (D-N.Y.) has introduced companion legislation in the House of Representatives.

Meanwhile, the anti-gun Center for American Progress observed the anniversary by proposing that gun control supporters stop trying to ban the guns outright, and instead push for a law requiring a permit to possess them, mandatory reporting of all interstate firearm sales, and several other restrictions. Just as “universal check” legislation is designed to lay the groundwork for firearm registration, the Center’s permit scheme would provide the federal government with a list of everyone who owns an “assault weapon,” which under Feinstein’s new bill would include tens of millions of Americans.

Surprisingly, the New York Times said that Feinstein’s bans had little or no effect on crime, but the newspaper didn’t fully understand why. Here, for the benefit of the Times and others in the same boat, are five of the reasons:

1. Unless gun control supporters are saying that increasing “assault weapon” ownership reduces crime, they can’t say that Feinstein’s gun ban reduced crime. That’s because Americans bought more “assault weapons” during the 10 years the gun ban was in effect, than during the previous 10 years. For example, Americans bought more than 730,000 AR-15s during the 10 years 1995-2004, almost double the figure for the preceding 10 years.

And here’s why. Feinstein’s “ban” didn’t ban any guns, it merely banned installing various external attachments on certain guns. This is why the rabidly anti-gun Violence Policy Center called the ban “eviscerated” and a “charade” and a “fictional ban” (VPC flyer on file with NRA-ILA), and why it said “You can’t argue with a straight face that the ban has been effective” (R. Montgomery, “Clock ticking on assault gun ban: Flaws put extension in doubt,” Kansas City Star, May 2, 2004, p. A1).

For example, Feinstein’s “ban” defined a semi-automatic, detachable-magazine rifle as an “assault weapon” only if it had two or more external features from a list included in the law. Manufacturers complied with the ban by producing AR-15s with only one of the features, the grip, ironically, the feature that gun control supporters most despise. 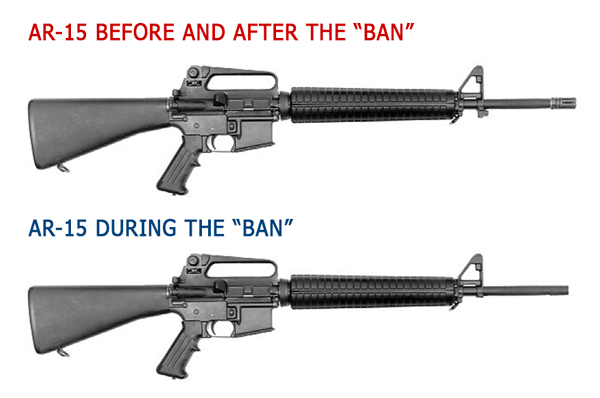 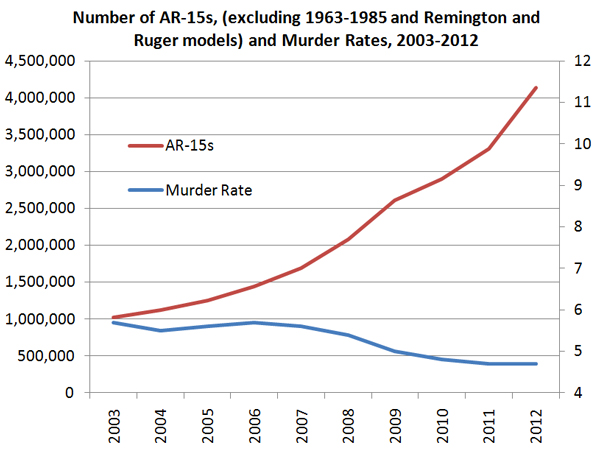 3. Unless gun control supporters are saying that increased ownership of magazines that hold more than 10 rounds deters crime, they cannot say that Feinstein’s “large” magazine ban reduced crime either. That’s not only because the vast majority of criminals who fire guns during crimes don’t fire more than a few rounds. It’s also because 50 million magazines that held more than 10 rounds were imported into the United States during the 10 years the “ban” was in effect. (Sen. Charles Schumer, D-N.Y., press release, “Schumer Moves to Renew Federal Ban on Assault Weapons,” May 8, 2003.)

4. The claim that Feinstein and other gun control supporters most often to pretend that the bans “worked” is based upon a mischaracterization of BATFE firearms traces. After the bans were imposed, “assault weapons” slightly decreased as a percentage of all firearms traced by BATFE. However, BATFE traces guns for various reasons, not only if guns have been used to commit crimes, and once the bans were imposed, law enforcement agencies were less likely to request traces upon the guns in question.

Furthermore, guns used to commit violent crimes have historically been a small percentage of guns that BATFE traces. In its current tracing reports, BATFE states “Law enforcement agencies may request traces for any reason. . . . Not all firearms used in crime are traced and not all firearms traced are used in crime. Firearms selected for tracing are not chosen for purposes of determining which, types, makes or models of firearms are used for illicit purposes. The firearms selected do not constitute a random sample and should not be considered representative of the larger universe of all firearms used by criminals, or any subset of that universe. Firearms are normally traced to the first retail seller, and sources reported for firearms traced do not necessarily represent the sources or methods by which firearms in general are acquired for use in crime.”

5. As the Times pointed out, criminals are more likely to use handguns than rifles or even shotguns of any sort. While gun control supporters try to malign semi-automatic rifles in the context of multiple-victim shootings, the one that had the most victims, at Virginia Tech in 2007, was committed entirely with handguns, and one of the criminals’ handguns was equipped with only 10-round magazines.

Another fact worth noting is that Feinstein’s “assault weapon” and “large” magazine “bans” were separate laws. Her ban on any magazine that held more than 10 rounds applied to magazines for any guns. Most such magazines are for handguns. Detachable magazines are required for the proper functioning of semi-automatic handguns, which are the most common handguns in use today. Moreover, in District of Columbia v. Heller (2008), the Supreme Court ruled that handguns cannot be banned and that the Second Amendment protects the right to keep and bear all firearms that are in common use for lawful purposes.

Clearly, gun control supporters had no reason to break out the champagne for the anniversary of the bans, and let’s make sure they feel like keeping it corked as the results of the upcoming elections start rolling in the night of November 4.

RELATED
11 Cases of Defensive Gun Use as 2020 Came to a Close
Gun-Control Group Spends Big to Boost Warnock
Gun Rights Are the Most Under Appreciated Issue of This Election
Canada Set to Ban 11 Categories of Assault Rifles, Other Weapons - Source
Biden Set to Head most Anti-Gun Ticket Ever