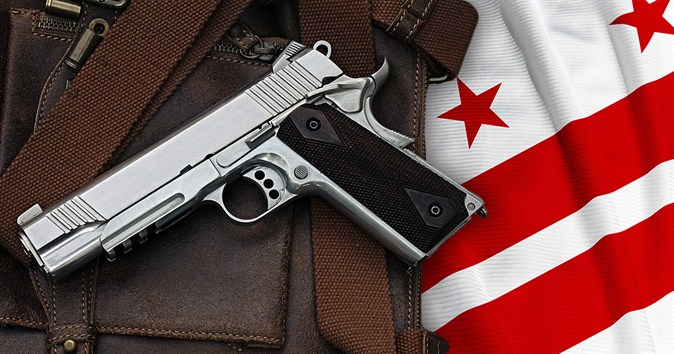 The nation's capitol, long infamous for its strict gun control, is now one step closer to being forced to comply with the Second Amendment. On Saturday, the United States District Court for the District of Columbia issued a decision in Palmer v. District of Columbia, which challenged D.C.'s ban on carrying firearms in public for self-defense. The court's opinion prohibits D.C. officials from enforcing certain provisions of local law that effectively prevent the carrying of firearms in public for self-defense.

D.C.’s former ban on handguns, of course, resulted in the U.S. Supreme Court's decision in District of Columbia v. Heller, which in 2008 recognized an individual right under the Second Amendment to possess firearms for self-defense. Two years later, the Supreme Court made clear in McDonald v. Chicago that the right recognized in Heller protects individuals from infringement by all levels of government, including federal, state, and local.

Heller and McDonald, however, only challenged the regulations at issue to the extent they applied to keeping firearms in the home. The Supreme Court did not offer explicit guidance on the degree to which the right to "bear" arms applied to carrying firearms in public places for defensive purposes, because that issue was not squarely before it in those cases. Nevertheless, its characterization of the Second Amendment made judicial recognition of the right to bear arms outside the home all but inevitable.

In recent years, federal appellate courts have yielded to the obvious and recognized that the right to bear arms indeed extends beyond one's front door. Notable decisions have included the NRA-backed cases of Shepard v. Madigan, which arose out of an Illinois ban on carrying in public, and Peruta v. San Diego County, which concerned a local regulation that made California's discretionary licensing system for carry an effective prohibition. These precedents featured prominently in the Palmer court's relatively short, straightforward opinion in that case.

According to the court's opinion in Palmer, "In light of Heller, McDonald and their progeny, there is no longer any basis on which this Court can conclude that the District of Columbia's total ban on the public carrying of ready-to-use handguns outside the home is constitutional under any level of scrutiny."

Predictably, D.C. officials and other gun control advocates have reacted negatively to the decision and have engaged in the same sort of overheated rhetoric about the supposedly "special" dangers of firearms being present in the District as they did during the Heller case. Of course, none of their dire predictions have come to pass as a result of the Heller decision. As with Heller, nothing in the court's decision on Saturday prevents the enforcement of laws pertaining to the criminal misuse of firearms. In both cases, the challenged restrictions made no attempt to distinguish between people who wanted firearms for legitimate versus criminal purposes. Thus, the decisions benefit only those peaceable individuals who conform their behavior to the law, not violent criminals who ignore the law and exploit the law-abiding tendencies of others to further their own criminal activities.

At this time, much remains unclear about the practical effects of the decision, particularly as regards those who are not D.C. residents with D.C. registered firearms. Besides the provisions that were specifically at issue in the case, D.C. has additional regulations governing the possession of firearms, ammunition, and magazines that apparently remain unaffected and that could easily snare unwary visitors to the District. Media outlets are attributing statements concerning enforcement policy to various D.C. officials, but we have yet to see anything that has been directly and publicly released by those officials to provide the public with guidance. Finally, media reports also indicate D.C. officials are actively seeking a court order that would suspend Saturday's decision pending further appeal, in which case the challenged laws could again be enforceable.

Given these complexities, visitors to D.C. wishing to exercise their Second Amendment rights should also exercise caution, and if in doubt about the legality of any planned action, they should directly contact the D.C. Attorney General's Office or the Metropolitan Police Department for clarification on where things stand.

Whether the District will seek further review of the court's decision remains to be seen. In the meantime, however, D.C. must now join all 50 states in the union in recognizing, at least to some degree, the fundamental right to bear arms under the Second Amendment to the U.S. Constitution. We will provide further updates as more information becomes available.