On September 19, school officials at Canyon High School in Orange California forced 16 year old student Haley Bullwinkle to remove her NRA t-shirt because school officials found her shirt promoted gun violence and violated the school’s dress code. The shirt depicted a deer, an American Flag, and a hunter holding a hunting rifle, with text stating “National Rifle Association of America, Defending America’s Traditions Since 1871”.  Haley was forced to remove her NRA shirt and wear a school shirt instead, or face suspension. 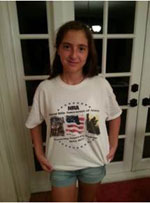 Haley changed her shirt, but came home at the end of the school day upset and afraid she would be suspended.  Haley’s parents were also upset. “She’s never been in trouble before. She gets good grades,” said Jed Bullwinkle, Haley’s father.  “She is not a threat to school safety in any way, no matter what shirt she’s wearing.  I don’t understand how this t-shirt could be made into a safety issue,” Mr. Bullwinkle said.

Mr. Bullwinkle asked the school principal to look into the matter.  In an email, the principal said “The shirt had a gun on it which is not allowed by school police. . . . It is standard protocol to have students change when they are in violation of dress code.”

The family contacted a local NRA instructor, and the case made it’s way to the NRA’s California lawyers at Michel & Associates in Long Beach. The firm has worked with the NRA in the past in successfully assisting several students facing similar school actions. Those cases including getting a case involving a Sacramento student wearing a sporting clays t-shirt dismissed (Steven Huish), getting an expulsion overturned against an early morning duck hunting student who left his unloaded shotgun in his locked off campus pick up truck (Gary Tudesko), and forcing an apology from administrators at Cornerstone Elementary the school after they forced 5th graders to cut the little plastic rifles off the little green army men they had glued to their graduation caps to show support for the armed forces.

Recognizing the need to bring Canyon High School’s  censorship to the attention of the public, the law firm contacted several local media outlets and began preparing a pre-litigation demand letter to send to the school. The story was picked up nationally and went viral, and the school was inundated with media requests for comment.  Among other things, these stories noted that the school mascot carries spears and arrows, the school football team logo has a spear on it, and the drill team twirls imitation rifles. The apparent double standard did not go unnoticed.

In the face of public ridicule and legal action the school district came to its senses and issued an apology. In a statement published by Michael L. Christensen, Superintendent of Schools, Orange Unified School District, the school district said the shirt was okay to wear to school, and promised to provide training to staff aimed at preventing future incidents. The matter now seems to be resolved, and the NRA has given Haley a carton of the banned t-shirts to give to her friends, to wear to school if they want to.

“This whole thing smelled of political censorship,” said civil rights lawyer Chuck Michel, attorney for the Bullwinkles.  “It was a school administrator applying a personal perspective without even taking the time to look closely at the message the shirt conveyed.”  Michel noted that this kind of incident goes unreported more often than not; students’ free speech issues like this one seem to appear in the national news on a regular basis, and for some reason schools are not fixing the problem.

He’s right. Sadly, these types of incidents are not rare. In Virginia a student faced possible jail time for refusing to remove an NRA t-shirt. Under ill-conceived “zero-tolerance” policies, political correctness is trumping common sense, with students facing suspension of worse for drawing a gun, chewing a pop-tart into the shape of a gun, or just making the shape of a gun with their hand.

Below are links to other news article related to this issue: