On Saturday night, millions of NASCAR fans will tune in to Fox to watch the NRA 500 NASCAR race.  NASCAR fans are a natural audience to support NRA's message of safety, responsibility, and freedom and we are proud to sponsor this fantastic sporting event.

Sen. Chris Murphy (D-Conn.), who has emerged as one of the most shrill and radical voices calling for gun control in the U.S. Senate, recently demonstrated that he holds the First Amendment in the same low regard as he does the Second.

In an April 11 letter to Rupert Murdoch, chairman and chief executive officer of News Corporation, Sen. Murphy urged Fox not to broadcast the race. 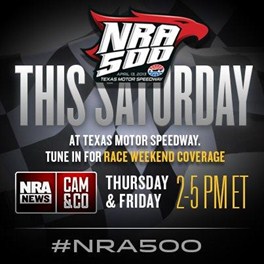 In his letter, Murphy refers to "the NRA and its radical agenda".  NRA's "agenda," which includes enforcement of existing laws against criminals, enhancing school security, and improving our nation's mental health system, while opposing a ban on private firearm transfers between family members and gun bans, is described in Murphy's screed as an "extreme position."  In his warped world view, Murphy suggests the wholesale cancellation of the broadcast would "play a constructive role in our national dialogue" and says that unless Fox takes the extraordinary step of cancelling its broadcast, it would "be strengthening the brand of a radical organization that is currently standing in the way of meaningful progress on this issue" and will be giving "credence to an extreme organization."

In addition to exercising your First Amendment rights by contacting your U.S. Senators in opposition to S. 649 and all anti-gun amendments, take the additional step of exercising your right to free speech by contacting Sen. Murphy to express your outrage at his attempts to blackout this perfectly legitimate broadcast.  Sen. Murphy's contact information is:

IN THIS ARTICLE
NASCAR Sen. Chris Murphy NRA 500 NASCAR race
UP NEXT x

Senate to Vote on Anti-Gun Measures Next Week--Your Activism More Critical Than Ever!