Slaughter on the Island: Highjacking the Flag of Conservation 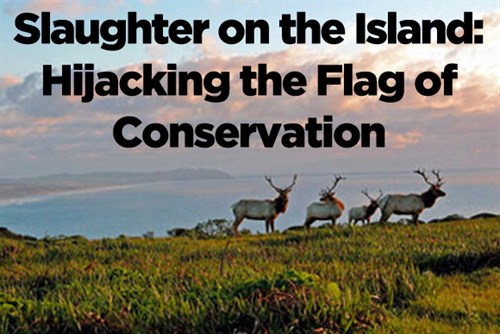 Nestled in the Pacific Ocean approximately 30 miles from the mainland of Santa Barbara sits a beautiful island where majestic Roosevelt elk and Kaibab mule deer roam free. Ferried across a treacherous channel, these grand species were brought to Santa Rosa Island some 80 years ago, but their days are officially numbered. A complete slaughter of these magnificent animals is scheduled to occur before the midnight tide rises on Dec. 31, 2011. Sharpshooters will be en route to the island soon to comply with a 1996 court settlement and 2007 legislation that reinstated the extermination order.

The 83-square-mile island was privately owned for more than a century before being sold to the National Park Service in 1986 for $30 million. Used as a cattle and sheep ranch for much of its modern history, overgrazing disrupted the balance of the island`s ecosystem. The 1996 lawsuit settlement required the removal of all cattle, sheep and feral hogs from the island, followed by a phased reduction of elk and mule deer to culminate at the end of 2011 with complete extermination.

As this is a government-mandated animal slaughter, you may ask where the Humane Society of the United States (HSUS) and People for the Ethical Treatment of Animals (PETA) have been in the process. They have been curiously absent, giving us a clear picture of their definition of "conservation." In fact, HSUS` congressional allies, U.S. Sens. Dianne Feinstein and Barbara Boxer and U.S. Rep. Lois Capps, blocked NRA`s efforts to prevent the slaughter in 2007 by inserting a provision into the omnibus appropriations bill that reinstated the extermination order. The animal-saving law blocked by the three lawmakers would have allowed disabled veterans to hunt the majestic elk and mule deer based on biologists` harvest recommendations.

The battle over Santa Rosa Island illustrates diverging definitions of "conservation." Theodore Roosevelt was largely responsible for sparking America`s conservation movement after witnessing the detritus left behind by the 19th century`s commercial big game slaughter. An avid hunter throughout his life, Roosevelt could not countenance big game populations dwindling below sustainable hunting levels. He helped to create the North American Wildlife Conservation Model, which used regulated hunting as an essential tool to bring back numerous species from the brink of extinction and help them thrive again.

Regulated hunting of Roosevelt elk and Kaibab mule deer on Santa Rosa Island has been employed and celebrated for decades, keeping populations in check that have no natural predators. Although the presence of such majestic beasts enriches the experience of all who visit the island, HSUS and PETA seem to prefer total extermination of the elk and deer populations rather than allowing one more hunter to take to the field. Again, these anti-hunting extremists refuse to acknowledge that hunters are largely responsible for preserving America`s wild lands and the wild things that Roosevelt held sacrosanct.

Animal "rights" extremists have tried to seize the word "conservation" and change its definition to remove hunting as a tool. Unfortunately, they have had some success and Santa Rosa Island may be their next victory.

The impact that domestic cattle and sheep, and feral hogs, can have on a unique landscape such as Santa Rosa Island is well known. A total of 1,175 hogs were killed during the `90s, but estimates put the number of hogs as high as 3,200 prior to a major drought in the late `80s. With voracious appetites, it is no wonder that the flora and fauna suffered tremendously. Some states see significant habitat impacts with similar hog populations. After the removal of domestic cattle, sheep and feral hogs, Santa Rosa`s ecosystem dramatically rebounded.

So why have the elk and mule deer been sentenced to die when the island`s ecosystem is rebounding? No reasonable answer has been given; the only explanation is that the two ungulate species are "non-native." Allowing the North American Wildlife Conservation Model to prevail through elk and mule deer management would mean a modicum of impact on the island`s environment. That is apparently too tall an order for HSUS and PETA because it would mean continued hunting of a few animals. The animal "rights" folks instead sit idly by as government-paid sharpshooters are scheduled to perform a 19th century-style slaughter, with the modern twist of using helicopters instead of horses.

There are only three native terrestrial mammals on Santa Rosa: the deer mouse, island fox and spotted skunk. With the domestic cattle, sheep and feral hogs gone from the island, a proper ecosystem could be easily maintained with the continued inclusion of scientifically managed elk and deer herds.

Roosevelt elk and Kaibab mule deer are only found in a small segment of North America and they are a celebrated part of Santa Rosa for a multitude of visitors from hikers to hunters. The isolated island population of these magnificent animals represents an important insurance policy if disease ever broke out on the mainland that could lead either species to extinction. Having an isolated species pool, a Noah`s Ark of sorts, can prove invaluable as proper elk and mule deer habitat on the mainland continues to erode because of urbanization, leaving species` health prone to widespread disease events.

"Surely all men who care for nature, no less than all men who care for big game hunting, should combine to try to see that not merely the states but the Federal authorities make every effort, and are given every power, to prevent the extermination of this stately and beautiful animal, the lordliest of the deer kind in the entire world."

I believe that the president who sparked the American conservation movement would write the very same words about the Santa Rosa slaughter today. The elk and mule deer herds could be so managed through hunting and other means as to have minimal impact on the island`s various flora and fauna with a continued existence as balanced members of the island`s ecosystem. This would continue the North American Wildlife Conservation Model that has become the envy of the world, albeit to the angst of the animal "rights" crowd simply because hunting would continue. It makes one wonder if these anti-hunting extremists would prefer to see more animals exterminated so that, in their twisted minds, no "suffering" would exist. It is hard to see any other way they would be satisfied given their inaction on Santa Rosa.

Rest assured that NRA will continue the fight to save the Santa Rosa elk and mule deer to the final hour. Join the fight; contact your United States senators and representative and ask them to call off the sharpshooters. If all concerned NRA members join forces, perhaps we can prevent the senseless slaughter of these remarkable animal populations and keep the animal "rights" extremists from taking hunting out of conservation.

Slaughter on the Island: Highjacking the Flag of Conservation