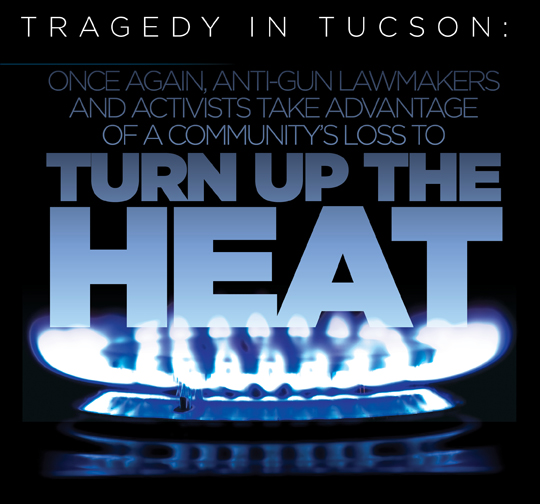 Since January's senseless attack on U.S. Rep. Gabrielle Giffords, D-Ariz., and her innocent constituents, we at NRA have joined our fellow Americans in offering our thoughts and prayers for those killed and injured, for their families and for the people of Tucson.

Sadly, it's no surprise that long before key facts about the attack became clear, and even before funerals had been held for those so tragically lost, anti-gun activists began calling for new restrictions on Americans' Second Amendment rights. On the very day of the murders, the Brady Campaign and the Violence Policy Center lashed out on the Huffington Post website, with the Brady Center's Paul Helmke attacking "easy access to high-powered guns" and the VPC's Josh Sugarmann denouncing the expiration of the 1994-2004 ban on magazines capable of holding more than 10 rounds of ammunition.

In a moment of candor about anti-gun groups' tactics, the VPC's Kristen Rand told MSNBC, "In the wake of these kinds of incidents, the trick is to move quickly."

These magazines are standard equipment for self-defense handguns and other firearms owned by tens of millions of Americans, but the Lautenberg and McCarthy bills (unlike the 1994 ban) would make it a felony to sell or transfer them, even through inheritance. Collectible guns and magazines ranging from original Civil War-era Henry rifles to Luger drum magazines valued at $2,000 or more would be lost forever.

Also unlike the 1994 ban, the Lautenberg-McCarthy bill's "grandfather clause" for possession of pre-ban magazines would only create an affirmative defense against prosecution--forcing defendants to prove that they possessed their magazines before the ban. That's a nearly impossible task for serious shooters, who may have bought dozens of magazines over many years, without any receipts to show for them.

And what good could it possibly do? The 1994 ban was a dismal failure. A congressionally mandated study conducted while the ban was in effect found that firearm murder victims had an average of only two wounds, both before and after the ban. (According to a follow-up study, the average number of wounds per victim was actually lower for victims shot with semi-automatic pistols than for those shot with revolvers.) And since the ban expired in 2004, the nation's murder rate has dropped 10 percent, continuing a long-term decline that began in 1991. Through 2009, the murder rate was at a 45-year low, and the FBI recently reported that the murder rate fell an additional seven percent in the first half of 2010.

Perhaps because of that history of failure, ban supporters fell back on overheated rhetoric. In a letter to her colleagues, Rep. McCarthy made the claim (echoed in countless newspaper editorials) that "The only reason for the existence of these devices is to be able to shoot as many people as quickly as possible." Yet her bill and Lautenberg's would allow the continued acquisition and possession of these magazines by law enforcement officers, who obviously carry guns to protect themselves and the public--not for mass murder. The bills would also allow magazines to be transferred to police officers upon retirement, even though a retired officer's right to use firearms for self-defense is the same as any other private citizen's right.

Anyone who's thought seriously about armed self-defense knows why honest Americans--private citizens and police alike--choose magazines that hold more than 10 rounds. Quite simply, they improve good people's odds in defensive situations. Contrary to what the public sees on TV or in the movies, criminals are not always stopped when struck with a single bullet, or even multiple shots. And one-third of aggravated assaults and robberies involve more than one assailant, according to the Bureau of Justice Statistics.

While a ban would harm the law-abiding, it obviously wouldn't affect violent criminals. After all, government studies have found that at least 40 percent of felons acquire their firearms from "street/illegal sources"--ranging up to 97 percent for criminals who attack law enforcement officers. And an attacker determined to commit mayhem can always use multiple magazines, multiple guns or a more powerful gun that holds less ammunition.

The magazine ban isn't the only idea getting attention. There have also been widely publicized proposals to ban possession of firearms near public officials. For example, U.S. Rep. Peter King, R-N.Y., has introduced a bill (H.R. 496) to ban possession of firearms within 1,000 feet of the president, vice president, cabinet members, members of Congress, federal judges and even unconfirmed presidential nominees. Similarly, U.S. Rep. Laura Richardson, D-Calif., introduced H.R. 367, which would create a 250- to 500-ft. "gun free" zone around posted congressional events. Rep. Richardson's bill would also punish states by taking away federal law enforcement grant money if they don't create similar zones around state and local officials.

Obviously, these outrageous proposals would be ignored by anyone who intends to harm a government official. Just as obviously, they would impose extraordinary burdens on honest gun owners.

For the members of the House and Senate alone, these bills would create as many as 60 square miles of roving "gun free" areas throughout the United States. Just adding federal judges would increase that to nearly 150 square miles, and there's no telling how large the areas would be for the other federal officials and tens of thousands of state and local officials mentioned in the bills. Americans legally carrying or transporting firearms under state law would be at constant risk of prosecution when they stumble across events they had no intention of attending.

These ideas are even more ridiculous when you consider that the Tucson attack took place only a few hundred feet from a school--so under the federal Gun Free School Zones Act, the killer would have had to break the existing law when he traveled on public streets near the school to get to the scene of his crime. Clearly, the new proposals would have just as little effect on this kind of tragedy.

Just banning guns in some places isn't enough for U.S. Sen. Barbara Boxer, who introduced a bill to destroy Right-to-Carry laws throughout the country. Under her bill (s. 176), every state that wants to allow concealed carry would have to require permit applicants to show that they have "good cause" and are "worthy of the public trust" to carry firearms--both of which would be at the total, arbitrary discretion of local officials. This would wipe out more than 30 years of legislative victories for gun owners, erasing "shall issue" permit laws in 35 states, as well as the permitless carry systems in Vermont, Alaska and Arizona.

Not to be outdone by those who actually hold federal office, New York City Mayor Michael Bloomberg and his group, Mayors Against Illegal Guns, used the tragedy to push their own longstanding agenda of attacking all private transfers of firearms. (That's an agenda that's irrelevant to the Tucson attack, since it's clear that the accused killer bought his gun from a big sporting goods store.)

They dressed up the proposal with provisions that would further restrict gun ownership by lowering the standard for mental illness or drug abuse needed to prohibit a person from possessing firearms--as well as the procedural protections against being considered mentally ill or a drug user. But their centerpiece is to require background checks on all firearm transfers. For years, anti-gun groups have called this the "gun show loophole"--since "loophole" typically means any law the groups don't like. Bloomberg and MAIG would impose federal background check requirements on all transfers, at gun shows or anywhere else. Even gifts to most of your relatives or any of your lifelong friends would not be exempt.

In typical Bloomberg fashion, the cry for imposing this new law was supported by yet another set of "sting" videos, showing undercover investigators buying guns from private sellers at gun shows. As with similar Bloomberg efforts in the past, his investigators' actions were sharply criticized by local law enforcement officials, with Arizona Attorney General Tom Horne complaining that Bloomberg's investigators failed to notify the Arizona State Police. "The fact that no such notification was made indicates this so-called sting is nothing less than a public relations stunt," said Horne, who also pointed out recent sharp increases in the Big Apple's crime rates and suggested that New York officials "have more pressing crimes to investigate than alleged violations at a gun show 2,400 miles away."

Yet despite all their frantic activity, MAIG and other anti-gun groups failed to get the recognition they really wanted--that is, a mention in President Obama's 2011 State of the Union address. The night of the speech, White House officials began promising a consolation prize: a separate speech on gun control at a later time. Although at press time, no date or specific topics for a speech had been announced, Newsweek reports that President Obama will "make the case that America's gun laws have been too loose for much longer than just the past few weeks." That's no surprise for those of us who have followed Obama's support of extreme anti-gun initiatives since the beginning of his public career.

We'll have our work cut out for us dealing with anti-gun proposals and propaganda over the months leading up to the 2012 elections. As always, we're confident that we can succeed with the support of NRA's most powerful asset: the strength, dedication and unity of our members.

Political Report: Protecting The Rights Of Those Who Protect Us