When Did Meet The Press Become The Love Boat 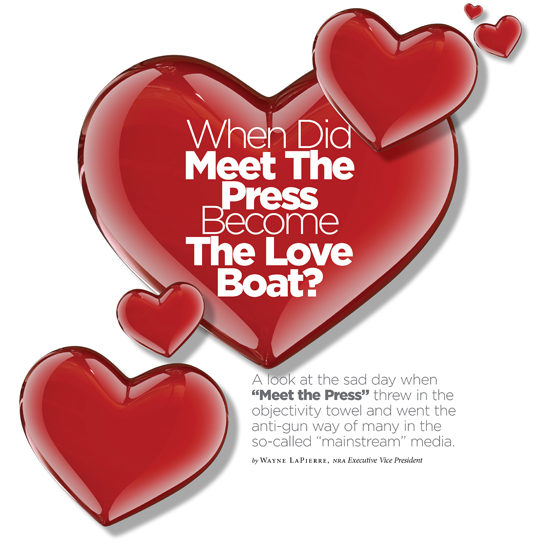 Sadly, under new moderator David Gregory, “Meet the Press” has now turned into a farce.

If you want proof, just get on the Internet and look at the Aug. 8 installment of the show, when New York City Mayor Michael Bloomberg appeared as a guest.

When Gregory asked Bloomberg about his increasingly aggressive attempts to impose New York City-style gun bans on the rest of America, Bloomberg responded with his usual litany of half-truths, emotional rhetoric and political boilerplate.

Yet instead of cornering Bloomberg with the lack of logic underlying his arguments--or even challenging the mayor to substantiate his various claims--Gregory let the whoppers and tall tales float off unquestioned like the balloons at the Macy’s Thanksgiving Day Parade.

And New York’s Mayor Mike Bloomberg just grinned like the cat that ate the canary.

The greatest shame and danger of it all is this: “Meet the Press” is the most-watched public-affairs talk show of the Sunday TV lineup.

So when moderator Gregory allows a politician’s lies to stand unchallenged, he doesn’t just let down his audience. He also fails in his duty to be a watchdog of government, instead becoming a lapdog of the politicians in power.

That’s not journalism. It’s PR, publicity, flack and fluff. And when it undermines or attacks the Right to Keep and Bear Arms, it directly endangers your firearms and your freedom.

Unasked Questions, Unchallenged Lies Any journalist who had done even the most minimal background research on Bloomberg’s proposals, existing law and violent crime statistics could have come up with a thousand follow-up questions for the mayor that might have revealed some truth.

But Gregory couldn’t seem to come up with a follow-up question to save his life.

In fact, in questioning Bloomberg, Gregory was so deferential and utterly unquestioning of Bloomberg’s responses that he might as well have been a cub reporter for a high school newspaper interviewing the principal in the principal’s office. It was a sham!

When Bloomberg spoke of the scourge of “illegal guns,” Gregory could have asked him how passing another law could possibly affect behavior that’s already illegal.

When Bloomberg painted a tragic word picture of what it’s like to go to the hospital to see a police officer felled by an armed criminal, Gregory could have asked the mayor why his own city’s police want more prosecution instead of the new laws that he tries to push.

Gregory could have said, “Mr. Mayor, many police say the problem in cities like New York isn’t a lack of laws, but a lack of enforcement. Police get some guns off the street, only to be faced with the same people back on the street within days or weeks to commit the same type of crime over and over again.”

When Bloomberg said that he planned to urge President Barack Obama to ban millions of semi-automatic firearms, any journalist worth a nickel would have challenged him to explain why, considering that murder has hit a 43-year low since the 1994 gun ban expired, and that Americans are buying those firearms for sport and self-defense at unprecedented rates.

When Bloomberg told Gregory how Obama’s secretary of education, Arne Duncan, adopted an anti-gun agenda after witnessing a criminal shooting in Chicago, that was a golden opportunity for Gregory to ask Bloomberg how yet another anti-gun law--in a city where handguns are already banned, even among the law-abiding--possibly could have prevented that crime.

When Bloomberg said, “This is just an outrage, there’s a federal law that says criminals can’t have guns, and we should enforce the law and get guns off the streets,” Gregory had a perfect chance to point out how, in cities just like Bloomberg’s New York, existing laws aren’t enforced--yet he just nodded, and Bloomberg just grinned.

Gregory never mentioned how it was the NRA--not Mayor Bloomberg and his “blame-guns-but-not-us” mayors club--that demanded, drafted and won legislation requiring that armed felons serve strict, mandatory sentences through “Truth in Sentencing” and “Three Strikes and You’re Out” laws, “Project Exile” and other criminal justice reforms.

Gregory never asked Bloomberg how more laws could control violent criminals when in California, for example, federal judges are forcing the state to open the floodgates on its prison system and release a terrifying 25 percent of the prison population--some 40,000 convicts--back onto the streets.

Stated simply, David Gregory was an ineffectual lightweight in this very important interview.

And not surprisingly, his audience is evidently realizing that fact.

“Meet the Press” Fails the Grade With more than 60 years on the air, “Meet the Press” is the longest-running show in television history, and it has a respected reputation--but that doesn’t mean it’s infallible or invincible.

According to MSNBC, when Gregory took over the show in December 2008, “Meet the Press” had been “the top-rated Sunday morning public affairs show for nearly 11 consecutive years.”

It’s easy to see why: Tim Russert, who hosted the show from 1991 until his death in June 2008, was a talented and tough, but generally fair and trustworthy, square dealer.

Considering the fact that journalists typically fall somewhere between politicians and lawyers when it comes to provoking public mistrust, Russert truly was an exception to the rule--and his ratings reflected that.

But the years of high ratings appear to be over for “Meet the Press.”

As Chris Wallace of “Fox News Sunday” told The Washington Post in April, Russert’s sudden death in the summer of 2008 meant that, in the kingdom of Sunday talk-show television, “the throne is empty.”

In August, according to the trade publication Broadcasting & Cable, for the first time in a decade ABC’s “This Week” bested “Meet the Press” in the ratings.

In fact, between December 7, 2008--when interim moderator Tom Brokaw handed over the reins of “Meet the Press” to Gregory--and August 8, 2009--when Gregory played the shill to Bloomberg’s anti-gun sham--the number of viewers watching the show dropped by almost 55 percent.

“Meet the Press”: A Name and Reputation Squandered

It really is a shame to see what’s happened to “Meet the Press” since Russert passed away. It represents the loss of a vital service to the country.

I think most Beltway insiders and people who follow politics would agree that “Meet the Press,” when Russert moderated it, was the best of the best among the Sunday talk shows.

If you went onto the show, as I did a half-dozen times or more, you knew Russert would try to put you on the hot seat. But you also knew he’d do the same to your opponents, and do so fairly to every side of the debate.

He was tough, but he was fair.

He’s not tough on politicians, because he doesn’t question what they say. And because he’s not tough, he’s not fair to their opponents--especially if they’re not on the show to offer their own rebuttals.

So in the end, all a guy like Gregory does is give politicians a national pulpit to push their latest schemes.

That’s not journalism. In fact, it’s the opposite of journalism. To label it as such is a sham and a fraud.

“The primary responsibility of the media,” Russert once said, “is accountability of government.”

On his March 19, 2000, show, on which I appeared as a guest, Russert told me, “We here at ‘Meet the Press’ want to hold you accountable for your comments.”

And that’s how Russert operated: He cornered politicians with their own contradictory statements. He did his homework. He read the research. He rooted out the inconsistencies. He called double-talk what it was. And he didn’t accept bogus answers from press spokespeople or the presidents for whom they worked.

Maybe it’s time for “Meet the Press” and its producers to revisit its roots.

In his memoir Big Russ and Me, Russert recounted how, before his first day as moderator of “Meet the Press,” he called Lawrence Spivak, the show’s co-founder, and solicited his advice.

Spivak told Russert, “Learn everything you can about the guests and their positions, and then take the other side on the air. If you do that in a civil way each week, you’ll have a fair and balanced program, you’ll get good answers and you’ll make news.”

Unless and until David Gregory returns to that proven and effective model, all “Meet the Press” will have is an empty throne--and an empty suit to sit in it.

The Truth About Gun Shows