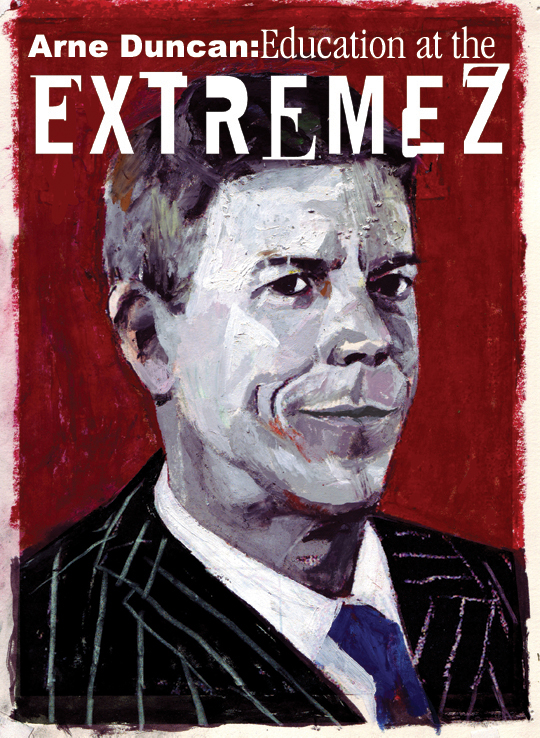 With President Barack Obama’s Cabinet reading like a “who’s who” of gun-ban advocates, it’s difficult to say which member is the most anti-gun. That is, until you meet Arne Duncan.

Who is the most extreme anti-gun member of President Barack Obama’s Cabinet? That’s sort of like asking who is the greatest quarterback in the Pro Football Hall of Fame--there are so many strong choices, it’s hard to pick just one.

But I think the prize has to go to new Secretary of Education Arne Duncan.

At the awards ceremony, Duncan said that he could not yet accept the award because victory over guns had not yet been achieved. But he promised:

“We’ll keep fighting the NRA, the gun makers, the gun dealers, the gangbangers and everyone else who refuses to accept the undeniable fact that guns and kids don’t mix.”

Note his absolute language. Duncan wasn’t just complaining about juvenile delinquents and gang members carrying illegal guns; his sweeping claim about “the undeniable fact that guns and kids don’t mix” is an attack on the Scholastic Clays Target Program, gun clubs with smallbore shooting teams for teenagers, and parents who take their children hunting.

Duncan continued: “We’ll fight them in Springfield, in the courts, in the community and even in the home.”

Even in the home.

“We’ll fight for as long as it takes and, when that fight is over, I will gladly accept this award,” Duncan crowed. “I will display it with pride. But not today--not yet. For now, the fight continues.”

You may ask yourself, “What can the secretary of education do to prohibit the rights of law-abiding gun owners?” To begin with, he can incessantly and hysterically use his bully pulpit to promote repressive gun control as an absolute necessity “for the children.” That’s what he did as superintendent of Chicago public schools.

He can use his position to legitimize, laud and encourage the most vicious gun-haters--including those who commit crimes against gun stores and who call for “snuffing out” gun-store owners. That’s what he did in Chicago.

Under the corrupt and repressive regime of Mayor Richard Daley, Chicago is the gun control capital of America and, not surprisingly, a city of prolific criminal violence.

Chicago, along with its suburb of Oak Park, is the only city in the United States with a blanket handgun ban. Currently, the NRA is challenging the ban in a case that is before the federal Seventh Circuit Court of Appeals.

It’s hard to see how the data support a claim that banning the possession of handguns by law-abiding citizens has made Chicago safer. In the 2007-08 school year, 34 Chicago public school students were killed. (Not during school hours in school, but somewhere else.)

Duncan claims that in America, “We just value our right to bear arms more than we value our children, and our priorities are fundamentally backwards.”

To achieve his gun-ban vision, Duncan works alongside a hatemonger who screams for mob violence: Father Michael Pfleger.

In Chicago’s South Side, Pfleger, the pastor at St. Sabina’s Catholic Church, is a well-known extremist who is frequently in the news. The Chicago Sun-Times (April 5, 2004) described Pfleger (as well as the racist preacher Jeremiah Wright) as one of Barack Obama’s three spiritual advisers. Based on an interview with Obama, the Sun-Times wrote: “Friends and advisers, such as the Rev. Michael Pfleger … who has known Obama for the better part of 20 years, help him keep that compass set, he [Obama] says.”

One of Pfleger’s most notable projects, in which Arne Duncan part-icipated, was the picketing of Chuck’s Gun Shop in Riverdale, a short distance south of Chicago. Pursuant to Illinois law, Chuck’s only sells guns to customers who have already obtained a Firearms Owner’s Identification Card (FOID) issued by the Illinois State Police after a background check. The employees of Chuck’s Gun Shop have also voluntarily undertaken the “Don’t Lie For The Other Guy” training program sponsored by the National Shooting Sports Foundation (NSSF) and the Bureau of Alcohol, Tobacco, Firearms and Explosives (BATFE) that helps gun store employees detect straw purchases (purchases by legal buyers conducted on behalf of prohibited persons).

Yet Father Pfleger and Rev. Jesse Jackson have organized crowds to repeatedly picket Chuck’s Gun Shop. On June 23, 2007, Jackson and Pfleger were arrested for criminally obstructing the entrance to the store. The charges were eventually dropped.

There is not a shred of evidence that Chuck’s Gun Shop has ever violated any law. It is not any misdeed by the store that attracts Pfleger and his crew. Their moral outrage against the store is simply that it sells firearms. They demand that the city council ban all gun stores, as they carry signs reading “Vote Riverdale Gun-Free” and chanted “Vote Riverdale Gun-Dry.”?

Pfleger also promised: “We’re going to snuff out legislators that are voting against our gun laws. We’re coming for you because we’re not going to sit idly.”??

Pfleger later denied that his words had been meant to invoke violence, or that he had known that “snuff out” means to “kill.” Rather, the determination to “snuff out” Riggio was supposedly a determination to discover his home address, which was not publicly avaILAble. ??

However, according to Roget’s Thesaurus, “snuff out” means “kill” and is simILAr to the following words: “blow away, bump off, chill, dispatch, dispose of, do away with, do in, dust, grease, hit, ice, knock off, murder, off, rub out, stretch out, waste, wax, whack, zap.”

In response to Father Pfleger’s words, Cardinal Francis George of the Archdiocese of Chicago stated: “Publicly delivering a threat against anyone’s life betrays the civil order and is morally outrageous, especially if this threat came from a priest.” (Chicago Sun-Times, June 8, 2007.)

Interestingly, there is no record of Duncan ever distancing himself from Pfleger’s death threat.

In fact, Arne Duncan used his role as Chicago schools superintendent to turn schoolchildren into props for the gun-ban movement. On April 1, 2008, Duncan had students from Chicago bussed to the state capital in Springfield, at taxpayer expense. The students missed school in order to spend the day serving as backdrops for gun control lobbyists. Accompanying Duncan on the trip was Father Michael “Snuffy” Pfleger.

Also in his position as superintendent, Duncan wrote a letter encouraging schools to have their students participate in the Illinois Council Against Handgun Violence’s annual “Essay, Poetry and Art Contest.”

In truth, Arne Duncan fully deserved the Man of the Year award from the ICAHV.

It is a little strange, though, that the gun-ban lobby calls its prize the “Abraham Lincoln Award.” Although Duncan denounces “our appalling fascination with guns,” President Lincoln was fascinated with gun design, as detailed in the book Lincoln and the Tools of War, by Robert V. Bruce. It was Lincoln who first employed the breechloader and the machine gun in warfare.

As commander in chief, President Lincoln did more to put guns in the hands of young people than any American since the days when the Pilgrims showed up at Plymouth Rock. And, of course, it was Lincoln’s generals--such as Ambrose Burnside, Ulysses Grant and Winfield Scott Hancock--who would become the founders and early presidents of the National Rifle Association.

The Brady Campaign praised Duncan as “a wonderful selection,” and from their point of view, he certainly is. What he has done to support the gun-ban movement in Illinois he can now do on a vastly larger scale. Moreover, the Department of Education publishes a vast amount of regulations and policy guidelines that affect public schools throughout the nation.

There is every reason to be concerned that Duncan will turn the Department of Education into a tool to promote a gun-ban agenda in America’s public schools. And we can fully expect that the “mainstream” media, which was so viciously hostile to the Bush administration, will fawn over Duncan’s public demands to repress the Second Amendment, “for the children.”