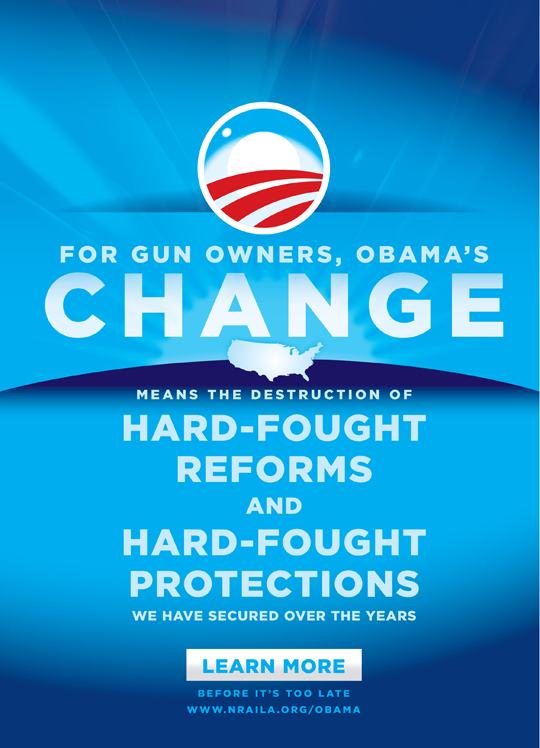 For the Brady Campaign, Violence Policy Center, Dianne Feinstein, Chuck Schumer, U.N. gun-ban extremist Rebecca Peters and her globalist billionaire sugar-daddy George Soros, for New York City Mayor Michael Bloomberg and his horde of big-city politicians—in fact, for all those individuals and organizations who would harm or destroy our Second Amendment rights—Barack Obama’s mantra of “change” means their agenda will be harnessed to the total power of an aggressive, activist and radical federal government.

“Change” means gun owners will be under siege like never before.

Especially for NRA members who fought through the never-ending threats of the Clinton-Gore administration, the understanding of “change” must be the driving force for us to get other gun owners to the polls. This election is critically important. We cannot afford to have any friend of the Second Amendment sit it out, regardless of the reason.

We all know gun owners who are disillusioned with politics. Those influenced by talk of four years of “progressives” in power coalescing a united conservative movement must be reminded that this November, we are not just electing a president, we are electing an entire government.

With Obama’s emphasis on grassroots organizing, his administration will be a government redesigned and realigned to stay in power. It will be a government converted into a political machine. And with a so-called “progressive” majority in both houses of Congress, there will be little to stop that power shift.

When Obama talks about “change,” the gun-banners at the Violence Policy Center and the Brady Campaign know exactly what change they want—inside power. And they’ll likely get it. 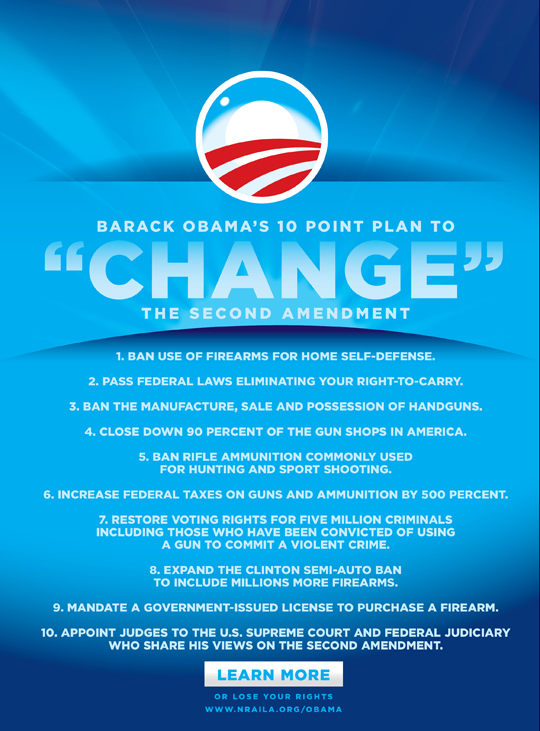 “Barack Obama ... is going to demand that you shed your cynicism. That you put down your division. That you come out of your isolation. That you move out of your comfort zones ... Barack will never allow you to go back to your lives as usual ...”.

As NRA members, this statement doesn’t bode well for our future. Our “lives as usual” means the daily exercise of our freedom.

And what of “cynicism”? It is the very basis of Americans’ long history of questioning government power and its abuse. It is the basis of challenging dissembling politicians. Cynicism is the key to seeing through politicians like Obama and Hillary Clinton, who falsely wrap themselves in the Second Amendment while espousing dangerous programs for civil disarmament.

And “division”? As NRA members, our “division” from the likes of Obama means we stand together and fight every day against those who would destroy the bedrock principles that have made our country the freest in the world. Divisiveness is the basis of our democratic institutions. Division based on principle is a noble thing.

“Comfort zone”? What about the life, liberty and pursuit of happiness guaranteed by the Declaration of Independence? That is the real “comfort zone” of all Americans. We are the only nation on earth built on the principle of “pursuit of happiness.” That means we do not serve government; it serves us.

The “change” Obama and his close allies—like George Soros’ Moveon.org —seek is a complete regime change driven by a radical political agenda. For the nation’s gun owners, “change” will take the form of many steps back to the bad old days of the Clinton-Gore years or the Jimmy Carter years, when bureaucrats in a dozen agencies were relentless in their schemes to press a hostile presidential agenda against gun ownership.

For gun owners, “change” could well mean an erosion of hard-fought reforms and hard-fought protections we have secured over the years. Those reforms represent battles won by gun owners led by NRA since the founding of the Institute for Legislative Action in 1975.

“Change” means removing the restrictions we secured against the Consumer Product Safety Commission from exercising a bureaucratic ban on firearms or ammunition based on phony “consumer hazard” criteria. This is something the Brady Campaign and the Violence Policy Center have vainly sought for years.

“Change” means ignoring the strictures imposed on federal gun-control enforcement by Congress, like preventing “firearms trace data” from being delivered into the hands of big-city lawyers to fuel punitive lawsuits to strangle the lawful firearms industry. This is New York City Mayor Michael Bloomberg’s dream, and it is the “change” demanded by his gun-ban axis of urban politicians.

“Change” means an effort to erase all of the reforms of federal gun laws created when Congress enacted the Firearms Owners’ Protection Act of 1986. That law ended a reign of terror by the Bureau of Alcohol, Tobacco and Firearms that, for gun owners and civil libertarians, was the shameful hallmark of the Jimmy Carter presidency.

“Change” means that federal lawyers from multiple agencies with unlimited taxpayer funding will find “creative” ways to bring elements of the law-abiding firearm industry to court, circumventing the restrictions of the Protection of Lawful Commerce in Firearms Act. As a freshman U.S. senator from Illinois, Obama voted against that law, which was designed to end punitive lawsuits claiming firearm industry liability based on totally unrelated acts of armed, violent criminals.

For those who don’t remember, in the waning days of the Bill Clinton presidency, the U.S. Department of Housing and Urban Development (HUD), along with the U.S. Department of Justice, used the threat of scores of separate lawsuits in many federal venues by city housing authorities to extort a supposedly “voluntary” gun-control agreement from firearm manufacturers. If Obama becomes president, you can bet the farm that bureaucrats will once again use these threats to obtain strictures that Congress would never enact.

In fact, among key advisors chosen by Obama to vet possible running mates is Eric Holder, who was Attorney General Janet Reno’s top deputy. Holder, as the Justice Department point man on all gun-control schemes, was among the top officials announcing the Clinton-Gore extortion agreement in 2000.

Among the many requirements of that agreement, a crucial one gave key elements of the gun-ban movement total oversight of the firearm industry and an ability to destroy it by running it out of business. None of this would ever have passed Congress as law, yet this stranglehold was achieved through the bureaucratic back door by Bill Clinton’s executive branch.

The ultimate aim of “smart gun” technology—to prevent a firearm being used by anyone but its registered owner—was spelled out in model legislation first floated in Pennsylvania, which said all handguns that did not possess “smart technology” would become contraband to be collected by police agencies.

All of this was created and pushed through the efforts of bureaucratic lawyers like Obama advisor Holder. Now the ultimate Washington insider lawyer, Holder is being touted as an Obama Supreme Court appointee. Recent headlines can put Holder’s reappearance on the political scene into sharp context. The Journal of the American Bar Association even asks: “Will Eric Holder Become the Next Attorney General?”

Among the many press briefings Holder ran was the unveiling of the massive Clinton-Gore legislative assault on gun rights in April 1999. At the time, Clinton was pushing for a federally mandated state gun-owner license. That legislative package included a three-day waiting period for the purchase of a handgun; a purchase limit of one handgun a month; and bans on high-capacity magazines.

Thankfully, all of these hostile executive branch threats, including the “voluntary” gun control by extortion, ended abruptly when George W. Bush took office—a fact many people have forgotten. But if Obama captures the White House, the onslaught against our rights will be reopened on many old fronts that have been largely forgotten, as well as in new venues.

You can bet an Obama administration will make a major effort to bureaucratically centralize lawful sales records created under the National Instant Check System, which would be the basis of a universal gun-owner registration system sought by every anti-Second Amendment advocate, public and private. Additionally, you can bet that there will be a major push to criminalize all now-legal sales between private individuals.

“Change” means giving the Center for Disease Control power to once again treat private ownership of firearms as a “disease” treatable by gun control—a power denied by Congress thanks to NRA, but which can quickly be changed. That wacky theory—that guns are a virus to “civil society”—is the basis for Rebecca Peters’ international gun-ban activities. During the Clinton administration, the CDC created a massive propaganda arsenal for the gun-ban movement that still feeds the media. Under Obama, the same is likely to occur.

On that score, “change” also means using a host of federal government think tanks to create “studies” and white papers intended to spawn new gun-ban laws. In the U.S. Justice Department alone, an Obama regime could use the Office of Justice Programs, which includes the National Institute of Justice, the Office of Victims of Crime, the Bureau of Justice Assistance and the Bureau of Justice Statistics, to do its anti-gun bidding. During the Clinton-Gore years, these Justice Department entities produced scores of anti-gun “studies,” many still used today to prop up gun-ban groups’ propaganda.

Further, these agencies and those in other executive departments have millions of dollars in grant-making authority. That is something Obama knows a great deal about. During his tenure as an active member of the Joyce Foundation board, Obama oversaw the distribution of $18 million to gun-ban groups, including major funding for the Violence Policy Center (VPC). Reportedly, Josh Sugarmann’s book, Every Handgun is Aimed at You, which pushed for a national handgun ban, was funded by Obama’s Joyce Foundation board. Before he ran for public office, Obama was considered the prime candidate to lead that deep-pocketed anti-gun money machine.

“Change” also means using the total lobbying and propaganda power of the White House and multiple federal departments to bring back a version of the Clinton gun ban, or to move an F-Troop Congress on any number of gun-control schemes. The presidency is the nation’s most powerful bully pulpit—especially for someone much of the so-called “mainstream” media worships as “the great orator.”

Stop a minute and think about the scope of power we hold in our hands as pro-Second Amendment voters. What we do with that power when we vote in November will determine so much for the future.

The 2008 election will determine who controls:

Think about how regulations could be abused through an Obama-led Federal Communications Commission, Federal Election Commission, even Department of Defense, to change the culture of the Second Amendment in America.

When you talk to those who want to sit out this election and let an Obama administration roll into Washington, just pick any agency that covers any area of those people’s lives that they hold dear and point out how Obama’s idea of “change” could affect them. Remind them that we are not electing just a president and vice president—we are electing officials in the entire executive branch, which can be used either to their good, or used for their harm.