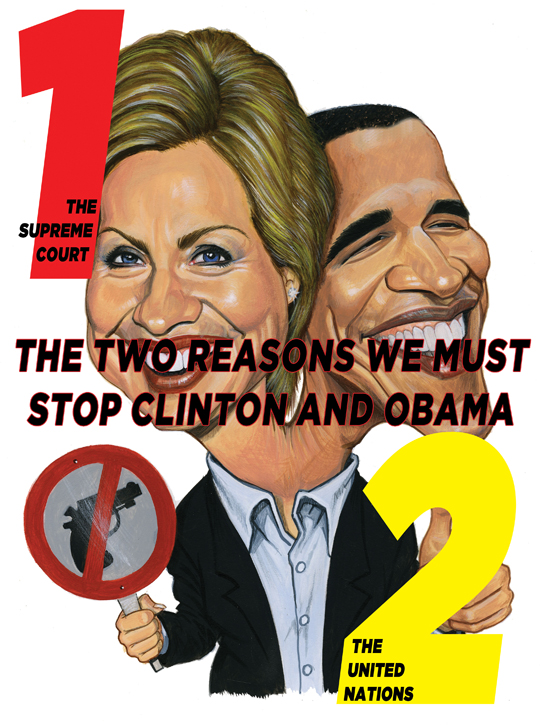 Recently, I've encountered some friends who are disillusioned over the political scene. As one recently put it, "The country would be better off with Barack Obama or Hillary Clinton in the White House, because after four years, the American people would have their fill of ‘progressives' and demand a true political revolution."

What I have said to them one-on-one must also be said to any of our number who might have that same "sit-this-one-out" mentality. Two things I mentioned to the cynics changed their minds--the Supreme Court and the United Nations.

Sen. Hillary Clinton, who has embraced every form of gun control you can think of--from registration, to licensing, to gun bans--actually put it better than I can. She told a newspaper editorial board in Iowa:

"I think you can make it clear that elections have political consequences, and among them are who gets to pick our judges . . . who has power and how they get to exercise that power . . ."

That power, Clinton understands, extends to the entire federal government, and she understands how that power can be used to pack the court with those unfavorable to the Second Amendment.

This is the fundamental fact that the "sit out this election" folks are forgetting. Whatever issue is driving our disheartened friends to believe that "worse will be better in the long run," we must remind them that the long run is exactly why the makeup of the U.S. Supreme Court trumps everything else.

Supreme Court justices are appointed for life. A relatively youthful anti-Second Amendment justice or two could hold supremacy over our Right to Keep and Bear Arms for the next 30 to 40 years.

Right now, we are seeing just how critical a change in the membership of the U.S. Supreme Court can be--especially concerning the Second Amendment. Nothing accomplished during George W. Bush's presidency has been more important than his appointments to the Supreme Court and the lower federal courts.

In the next few years, it is likely that two, maybe three, Supreme Court vacancies will occur. The one appointing replacements will be critical to everything we hold dear--and that holds true for all of our friends who are dedicated to preserving freedom in other areas.

Here is what Sen. Barack Obama sees as the role of the Supreme Court; he recently declared during one of his town hall meetings:

In other words, it's about social engineering, not interpreting the law.

As for Clinton, her vision is also very clear--and just as frightening:

"I'm going to be looking for people," Clinton said, "who respect that the Constitution is an organic, growing, evolving set of principles that have stood the test of time, and we can't just be looking at it as though it is frozen at some point in the late 18th century . . ."

To my mind, that statement from Clinton defines exactly why we don't need any more activist social engineers creating law from the bench.

In truth, the only major presidential candidate talking about strict adherence to the Constitution by the courts is Sen. John McCain. In May, he laid out his vision of America's court system to a Wake Forest University audience:

Counter that with Clinton's view of what is at stake for her party's progressive philosophy come November. Again, remember Hillary's words: "I think you can make it clear that elections have political consequences, and among them are who gets to pick our judges . . ."

With a Senate controlled by party members who agree with her, Clinton knows what is up for grabs--nothing less than the entire federal court system, with scores of vacancies created by a politicized confirmation process designed to kill the nomination of any "strict constructionist."

To see how important this issue truly is, let's look at the damage just one U.S. district court judge can do. Many of the most outrageous abuses of the federal judicial process have been before Brooklyn federal judge Jack B. Weinstein. Anti-gun to the core, Weinstein has even gone so far as to ban the use of the words "Second Amendment" and "National Rifle Association" during court proceedings.

Many of these cases are based on an abusive, Orwellian legal claim that the federally licensed firearm industry is somehow responsible for the violent acts of armed criminals in New York City. Anti-gun groups have tailored their cases and abused court procedures to get into Judge We