Your Vote is Your Voice: Make it Heard! 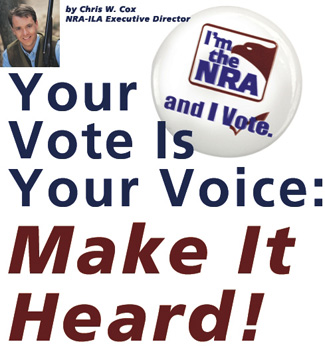 Ronald Reagan, in his first inaugural address, reminded us: "We are a nation that has a government-not the other way around. And this makes us special among the nations of the Earth. Our government has no power except that granted it by the people."

In other words, "the consent of the governed," as eloquently stated in the Declaration of Independence. Thomas Jefferson, that extraordinary document's principal author, also wrote that: "[It is] by their votes the people exercise their sovereignty."

Indeed, and it is by their votes that the people determine the outcome of elections. If there is one thing NRA members know, it is the fundamental truth that elections matter. We know that we must work unrelentingly to elect candidates who support the Second Amendment, and to defeat candidates who disrespect our Right to Keep and Bear Arms.

The sad truth, however, is that there are some among our gun-owning ranks who aren't even registered to vote. We've all heard the excuses.

"My vote won't make a difference."

"Voting doesn't matter, politicians are all the same."

"It's too much trouble."

It's up to us to convince these gun owners why such thinking is dangerously misguided. We also need to show them that registering to vote is easy, taking only a few minutes at the kitchen table or on the Internet (www.nraila.org is a great place to start). 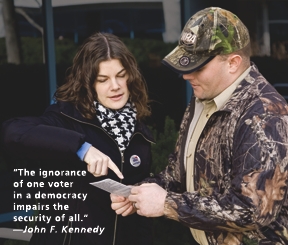 We must convince our friends that their votes count. The last governor's race in the state of Washington was decided by only 129 votes out of 2.8 million cast. And how about the 2000 presidential election? More than 105 million Americans voted, but only 537 ballots in Florida kept Al Gore from moving into the White House.

As for the notion that all politicians are the same, ask your non-voting friends just where we'd be today if a President Gore had been able to continue Bill Clinton's eight-year assault on our rights. Now is a particularly good time to ask, with Hillary and Bill pulling out all the stops to return to 1600 Pennsylvania Avenue.

We must ensure that every gun owner and sportsman is registered to vote. The good news is that we have important advantages over the anti-gun crowd. With some 80 million lawful gun owners in the United States, we can focus our voter registration efforts with rifle-shot precision on those places where our fellow citizens who support the Second Amendment can be found.

As an NRA a member, you are perfectly positioned to assist in this tightly targeted effort-providing voter registration materials to your local gun club, shooting range, gun shop and gun show. Make sure you and your family, friends and fellow firearm owners and Second Amendment supporters are registered. Then, all that's left is to make sure they vote.

Don't forget that every state allows for early and/or absentee voting. Most states have few or no restrictions on such voting. The anti-gunners know these votes determine election outcomes -can anyone forget the Gore 2000 campaign's cynical effort to disqualify our service members' absentee ballots?

With the rise of early and absentee voting, Election Day is no longer a single day, but rather a period that can last for weeks. Voting early or absentee "banks" your vote, freeing you up to help friendly candidates' campaigns turn out the remaining pro-gun votes on Election Day, when final victory is won.

Your Vote is Your Voice: Make it Heard!