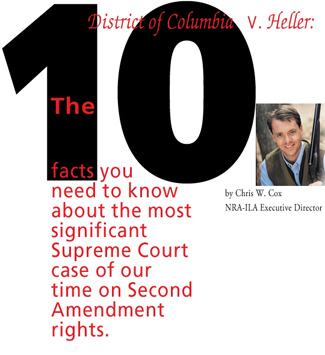 On November 20, the Supreme Court agreed to hear one of the most important Second Amendment cases in history. The case is a challenge to Washington, D.C. laws that forbid possession of handguns not registered before 1977; forbid possessing any firearm at home if not unloaded and disassembled or secured by a trigger lock; and forbid carrying a handgun, openly or concealed, without a license-even from room to room in the home.

Briefs by the parties and "friends of the court"-including NRA-will (click Here to read NRA's brief) be filed throughout the winter and spring, and the court will hear arguments in March. Experts anticipate a June decision-and the wisest of those experts know not to make any firm predictions.

The outcome may be uncertain, but the media spin isn't. To help you follow the action as it unfolds, here are the top 10 things you need to know about the case.

1. How the case got here. Shelly Parker and five other Washington, D.C. residents sued to overturn the city's laws that prevent them from using guns in self-defense at home. The U.S. District Court for the District of Columbia dismissed the suit, rejecting what it called "the notion that there is an individual right to bear arms separate and apart from service in the Militia." Because there's no right, the court said, the plaintiffs had no standing to sue.

The citizens appealed and got a friendlier reception in the U.S. Court of Appeals for the D.C. Circuit. There, a three-judge panel held that the Second Amendment protects an individual right outside of militia service and that the D.C. laws violate that right.

At the same time, the D.C. Circuit found that only one plaintiff-Dick Heller-could sue, because D.C. had actually denied his application to register a handgun. The full circuit court denied D.C.'s request to review the panel ruling.

The District has now appealed to the Supreme Court-against the wishes of anti-gun groups who fear that a pro-individual rights ruling will threaten gun laws nationwide. Because D.C. filed the appeal, and all of the plaintiffs but Heller were dismissed, the case is now called District of Columbia v. Heller .

2. The Supreme Court's decision in Heller may be limited. The Supreme Court has said that its review of the Court of Appeals decision in Parker will be "limited to the following question: Whether Washington, D.C.'s bans [on handguns, on having guns in operable condition in the home and on carrying guns within the home] violate the Second Amendment rights of individuals who are not affiliated with any state-regulated militia, but who wish to keep handguns and other firearms for private use in their homes."

3. The individual rights interpretation of the Second Amendment goes back to our nation's founding. The District's theory-that the Second Amendment protects a right of individuals to possess firearms only for active duty in a militia-did not exist when the amendment was written, approved by Congress and ratified by the states. Neither did the theory that it protects a so-called "state's right" to have a militia.

Attorney and preeminent Second Amendment historian Stephen Halbrook has found no evidence that anyone associated with drafting, debating and ratifying the Second Amendment ever considered it anything other than a protection of a preexisting individual right to keep and bear arms. As Halbrook has also noted, that view prevailed into the 19th century.

In his 1829 commentaries on the Constitution, Federalist William Rawle wrote that if Congress or a state legislature tried to disarm the people "in any blind pursuit of inordinate power," the Second Amendment "may be appealed to as a restraint on both."

And in 1833, Supreme Court Justice Joseph Story declared "The right of the citizens to keep and bear arms has justly been considered, as the palladium of the liberties of the republic."

By contrast, D.C.'s "militia duty" theory was not invented until 1905, in the Kansas Supreme Court's decision in City of Salina v. Blaksley, while the "state's right" theory arose in 1943, in the Third Circuit U.S. Court of Appeals decision in U.S. v. Tot.

4. In U.S. v. Miller (1939), the Supreme Court did not, as the District of Columbia claims, consider the Second Amendment to protect only a right to be armed while serving in a militia. And, contrary to what some gun control supporters have claimed, the Court did not consider the amendment to protect a so-called "state's right" to maintain a militia.

Had the court held either of those views, it would have said the Miller defendants had no basis for a Second Amendment claim, because they were individuals with no apparent connection to a militia, and they certainly were not states.

But the court never mentioned it. To the contrary, as the Court of Appeals noted in Parker, the Supreme Court in Miller said that the militia consists of "civilians primarily, soldiers on occasion . . . bearing arms supplied by themselves." (Emphasis added.)

5. U.S. v. Miller contradicts the District's claim that handguns are not "Arms" protected by the Second Amendment. We can't respond much more eloquently than the D.C. Circuit did in Parker:

"[T]he District's claim runs afoul of Miller's discussion of 'Arms.' The Miller court concluded that the defendants, who did not appear in the Supreme Court, provided no showing that short-barreled (or sawed-off) shotguns-banned by federal statute-bore 'some reasonable relationship to the preservation or efficiency of a well regulated militia.' However, the Court also observed that militiamen were expected to bring their private arms with them when called up for service. Those weapons would be 'of the kind in common use at the time.' There can be no question that most handguns (those in common use) fit that description then and now."

6. The Second Amendment does not create a right out of thin air. It protects a right that existed before the Constitution was written. Opponents of the individual right to arms-and many who parrot them in the media-talk in terms of whether the amendment creates, grants, establishes or confers a right. If they acknowledged that the amendment protects a right that existed before the government did, they would have to admit that the right doesn't belong to government, or to those on duty in a government's militia. Rather, the right belongs to private individuals.

The text of the Second Amendment confirms this. It does not say, "the people shall have a right to keep and bear arms." It says, "the right of the people to keep and bear Arms shall not be infringed." (Emphasis added.) The Supreme Court confirmed this point in U.S. v. Cruikshank (1876), declaring, "This is not a right granted by the Constitution. Neither is it in any manner dependent upon that instrument for its existence."

7. The Second Amendment protects the right to keep arms, as well as the ri