Sliding Down The Slippery Slope 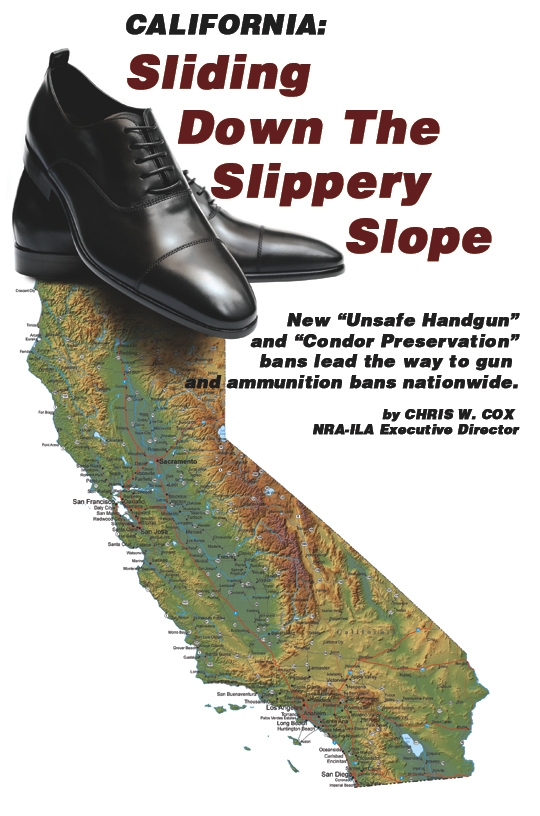 As California goes, so goes the nation," is a familiar saying in politics. No one hopes more than gun-control extremists that the saying is true. If Congress and other states follow California's increasingly aggressive lead on banning guns and ammunition, and carry it to its extreme conclusion, most or all guns will eventually be illegal to sell, and most or all ammunition will eventually be illegal to shoot.

On October 13, California Governor Arnold Schwarzenegger buckled under pressure from gun-ban supporters Sens. Dianne Feinstein, D-Calif., and Edward Kennedy, D-Mass., and signed into law A.B. 1471, expanding the state's so-called "unsafe handgun" ban. Urged on by anti-hunting groups, Schwarzenegger also signed A.B. 821, which bans hunting big game or coyotes with center-fire rifle and pistol ammunition that contains lead in territory inhabited by California condors. The laws lay the groundwork for broader bans on guns and ammunition that, if history is any guide, will soon follow in California and elsewhere.

Nothing in politics happens in a vacuum, and A.B. 1471 and A.B. 821 are no exceptions. Even before these bills, California had already banned more rifles, pistols and shotguns than any other state, starting with limited bans and expanding them step-by-step. 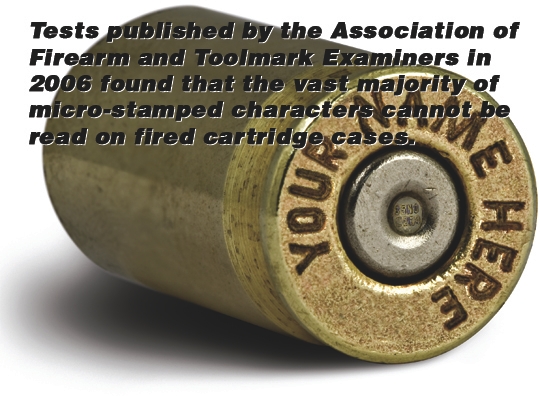 Now, A.B. 1471 imposes the state's fourth "unsafe handgun" ban in just six years. As of January 1, 2010, California will prohibit the sale of any new model of semi-automatic pistol that is not equipped with two or more internal parts that imprint the fired cartridge case with a microscopic array of characters that identify the make, model and serial number of the pistol. This requirement is based on patented "micro-stamping" technology available from only one company-which, needless to say, joined gun-ban groups in lobbying hard for the bill. Manufacturers cannot completely redesign their factories to incorporate this unreliable technology and will likely stop introducing new models in California.

According to micro-stamping advocates, the microscopic codes can be entered into a computerized database before the gun leaves the factory. Then, if a gun is used in a crime, police investigators can supposedly pick up a cartridge case left at the scene, identify the markings on the case, run them against the database, and identify the criminal. Parroting one another, Feinstein and the Brady Campaign claim that A.B. 1471 will make it possible for California criminals to be "rapidly identified and arrested."

It's an interesting theory, but not as interesting as reality. Tests published by the Association of Firearm and Toolmark Examiners in 2006 found that the vast majority of micro-stamped characters cannot be read on fired cartridge cases. After similar results in a study at the University of California, Davis, researchers called the technology "flawed," and concluded, "At the current time it is not recommended that a mandate for implementation of this technology in all semi-automatic handguns in the state of California be made." Both studies found that the markings on firing pins were easily removed in seconds with common household tools.

Even if micro-stamping worked as advertised, there are many practical reasons it cannot live up to its advocates' claims. For one thing, three-fourths of violent crimes, including one-third of murders and three-fifths of robberies, are committed without guns. Most crimes involving firearms do not involve shots fired, so there are no fired cases to be recovered by police. 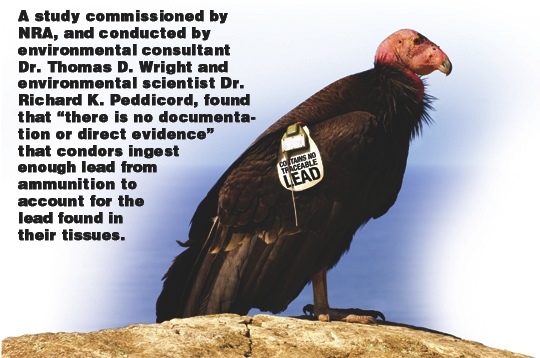 Even if criminals leave cases behind, "micro-stamping" cannot guarantee a link between a gun and its purchaser unless the gun is registered. Criminals do not generally register guns, of course. The Supreme Court has ruled that, under the Fifth Amendment's protection against self-incrimination, felons (prohibited from possessing guns) cannot be required to register guns. And almost nine of every 10 criminals who use guns get them through theft or on the black market. Requiring "micro-stamping" will only encourage thefts and expand the black market.

Criminals can also thwart micro-stamping by leaving previously fired brass (picked up at shooting ranges, for instance) at crime scenes to throw investigators onto the trail of innocent citizens.

Regarding A.B. 821, practical realities were of no greater importance to a majority of California state legislators and Schwarzenegger where the ban on big game and coyote hunting with lead bullets was concerned.

By way of background, the California condor is listed as an endangered species. The birds have long occupied an area northwest of Los Angeles, and are also found in parts of Arizona, Utah and Mexico. Since 1997, one California condor has died of exposure to lead, eight others have been treated to reduce toxic lead levels, and all condors examined have had detectable lead in their blood.

A.B. 821's supporters pointed to a study led by Molly Church of the University of California, Santa Cruz, which concluded that "incidental ingestion of ammunition embedded in carcasses that condors feed on is the principal source of elevated lead exposure that threatens the recovery of condors in the wild." However, Don Saba, a research scientist in biochemistry and medicine (and a member of the NRA Board of Directors) reviewed the Church study and found that it "knowingly omitted critical data ... [that] indicate that the source of lead in the blood of condors is not from ammunition, but rather originates from some other source of lead in the environment."

As other possible sources of lead, a study for the California Department of Game and Fish, conducted at UC Davis, pointed to natural deposits, disposal of items that contain lead (such as batteries) and residue from leaded gasoline exhaust, among others. Similarly, a study commissioned by NRA, and conducted by environmental consultant Dr. Thomas D. Wright and environmental scientist Dr. Richard K. Peddicord, found that "there is no documentation or direct evidence" that condors ingest enough lead from ammunition to account for the lead found in their tissues. Wright and Peddicord concluded that the types of lead found in condors "(1) vary widely, (2) are not different from background lead ratios in the California environment and (3) are not unique to ammunition."

Before the California legislature approved A.B. 821, the California Game and Fish Commission was studying the issue and receiving input from the public on how best to address it. The Commission was well aware of hunters' concerns. For example, a 2006 survey by Responsive Management found that 73 percent of hunters-in keeping with the conservationist tradition-would be willing to take voluntary steps to reduce the amount of lead they leave in the field. On the other hand, 25 percent said they'd hunt out of state, hunt less or quit big game hunting entirely-a prospect that could have cost the state hundreds of millions of dollars in economic losses, and cost over 2,200 jobs supported by hunters.

These hunters' reactions are understandable. While many happily use non-lead bullets and find them effective, ammunition availability is limited for those who don't handload. An average hunter who wants to use dad's old .300 Savage or .35 Whelen is out of luck. Even "non-lead" bullets contain trace amounts of lead-a fact the Game and Fish Commission warned Schwarzenegger about before he signed the bill.

The Commission is responsible for making management decisions about the state's wildlife resources, and protecting and restoring endangered species within the state. It should have been allowed to do its job. In the end, though, the legislature and governor preemptively imposed the lead ammunition ban, though its benefits to condors are little more than speculative.

When it comes to micro-stamping or ammunition bans, we don't need a crystal ball to predict the future. Proposed federal legislation shows that gun-control supporters will push to expand the micro-stamping law to cover all new semi-automatic pistols, and perhaps more. H.R.1874, introduced in Congress by Rep. Robert Andrews, D-N.J., proposes to prohibit any firearm available now or in the future-rifle, shotgun or handgun, semi-automatic or not-that does not "micro-stamp" effectively with every type of ammunition, every time.

And while California's lead-ammunition ban applies only to hunting certain game within a portion of the state, it is inconceivable that gun-control supporters will miss the chance to cover non-hunting uses of guns. The most radical anti-gun group in the country, the Violence Policy Center, is already on record claiming that "any possible benefits of firearm safety training are outweighed by the risk of lead poisoning," and that "states and localities should consider moratoriums [sic] on the construction of new ranges."

After many victories in gun control battles at the federal, state and local levels in recent years, these two new laws in California foreshadow a new, long-term challenge to our Right to Keep and Bear Arms. Gun owners should take note, and prepare for more battles to ensure that these latest ideas don't spread nationwide.