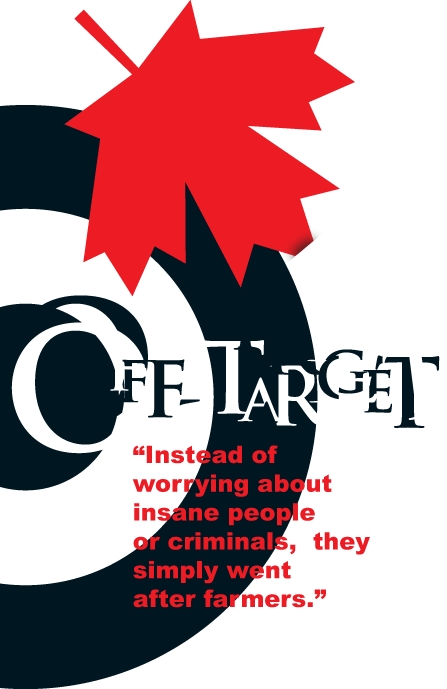 A 1989 college shooting in Montreal incited a $2 billion Canadian long gun registry. Seventeen years later, another Montreal college shooting mocks the failed registry.
Several school shootings this fall in the United States have, predictably, led the anti-gun groups and their media allies to renew their demands for more American gun control. But a tragedy in Montreal, Canada, shows how dangerous the anti-gun agenda can be--for students and for everyone else.

Because of the copycat effect, a single highly-publicized attack on a school tends to beget others--some of which, fortunately, are thwarted before the attacks begin by people who tell the authorities when they have good reason to believe that someone poses an imminent danger.

Sadly, nobody in Canada spoke up about Kimveer Gill.

On Sept. 13, the 25-year-old implemented an attack he had been planning for more than a month, when he shot two people near the entrance of Dawson College, a community college in Montreal. Then, armed with a handgun, a carbine and a shotgun, he walked to a cafeteria known to be popular with Jewish students and began firing at random. He fired 50 shots, killing 18-year-old Anastasia De Sousa and wounding 9 others, putting two of them into a coma.

By coincidence, two police officers were visiting the Dawson campus that day. They responded immediately, as did reinforcements. Gill used a pair of hostages as human shields. After being wounded in the arm by the police, Gill fatally shot himself.

A review of security camera tapes revealed that Gill had been staking out the school since August 10.

A few days later, police in Hudson, Quebec, arrested a 15-year-old male who had threatened to shoot up a local high school. Hunting rifles were confiscated from his home.

Those firearms were properly registered in accordance with Canadian law, as were all of Gill’s guns.

Ironically, it was a mass murder at another Montreal college in 1989 that led to enactment of Canada’s present repressive and ineffective gun registration laws.

Marc Lépine (whose birth name was Gamil Gharbi) was the son of an Algerian immigrant who was an alcoholic, woman-hating, violent domestic abuser. Lépine was also a big fan of Corporal Denis Lortie, who in 1984 had perpetrated a triple homicide in the Quebec National Assembly.

On December 6, 1989, Lépine--who blamed women for the many failures of his life, including rejection by the Canadian armed forces--attacked a computing class at the École Polytechnique, the engineering school at the University of Montreal. After ordering the men out of the room, he fatally shot 13 women, fatally stabbed another and wounded eight women and four men, roaming the building at will before a long-delayed and incompetent police response finally resulted in his demise.

Like Lépine, Kimveer Gill was a bundle of hatred. On the VampireFreaks.com website, Gill dubbed himself “Fatality666” and expressed his desire to be the “angel of death.” He said he wanted to die “in a hail of bullets,” and snarled that “anger and hatred simmers within me.” He described himself as a Satanist, and he posted pictures of himself in menacing and malicious poses with knives and firearms.

His neighbors were afraid of him, and his friends reported that “he had a big problem with humanity in general.”

After the 1989 Montreal massacre, the Progressive-Conservative government responded with a harsh new gun law that, among other things, banned many self-loading guns and classified many other self-loaders as “restricted weapons.” In Canada, all handguns were already “restricted weapons,” requiring a special licensing procedure and registration; the process takes about three months.

The Progressive-Conservative anti-gun law helped alienate the party’s base of support--it was demolished in the next election and no longer exists. However, the pc anti-gun laws were not nearly enough for Canada’s anti-gun lobby.

Heidi Rathjen, who had been a student at Polytechnique during Lépine’s attack, co-founded the Coalition for Gun Control, which used the 1989 crime to demand vast new anti-gun laws.

Their efforts were supported by many feminists who had not a word of criticism for the misogynist Algerian culture that had spawned Lépine, but who were instead enraged at traditional Canadian values of masculinity. For example, in The Montreal Massacre (Gynergy books, 1991), Quebec feminists called for a complete reconstruction of masculinity, decried masculinity as inherently anti-women and pro-death, and traced the pathologies of men to violent entertainment and rough sports.

In 1995, Rathjen and company got almost everything they had demanded when the new Liberal government passed a law making gun license applications subject to the de facto veto of the applicant’s spouse or former girlfriends, and abolished privacy for gun owners by making every gun owner’s home open to warrantless, unannounced police inspection.

The capstone of the law was the creation of a registry for all rifles and shotguns.

Proponents promised that the registry would cost only $2 million (Canadian). Now the cost has reached over $2 billion and is still climbing. The $2 billion that was wasted on the registry could have been spent on putting police on the street (rather than shuffling paperwork). Or it could have upgraded forensics laboratories. Or it could have paid for social worker outreach to potentially violent people.

After the Dawson attack, Wendy Cukier--who was Rathjen’s co-founder of the Coalition for Gun Control--said, “The argument for gun control has never been based on individual cases.”

Calgary Sun columnist Ian Robinson responded to Cukier’s claim: “Her statement is disingenuous to say the least. ‘Disingenuous’ is a fancy word for ‘lie.’”

He reminded readers, “The entire gun control and registry debate in this country is, and always has been, based on an individual case,” (the École Polytechnique shooting). After 1989, gun control became “part of the nation’s ongoing gender wars and was framed in precisely those terms.” He remembered, “Anyone who objected to the content of the legislation--citing practicality, lack of efficacy, civil rights--was written off as some kind of psychopathic redneck.”

The problem with the gun registration fiasco is not just that it didn’t work at preventing precisely the type of crime that had led to the creation of the registry in the first place. Rather, the registry made Canada much less safe by wasting enormous criminal justice resources.

Last January, Canadians dumped the Liberal government, which had set up the gun registry, and elected Conservative Prime Minister Stephen Harper. He has announced plans to put more police on the street, and to impose mandatory sentences for violent crime and for crimes such as stealing or smuggling firearms.

Even after the Dawson shootings and a renewed cry by gun-haters to save the long gun registry, Prime Minister Harper refuses to back away from his proposal to abolish it.

He told the House of Commons, “What this last government did is that instead of worrying about insane people or criminals, they simply went after farmers.”

However, Harper heads a minority government, meaning that it is the largest party in Parliament, but it does not have a majority. Accordingly, it may be difficult to get rid of the registry unless the Conservatives win an outright majority in the next election.

Although abolishing the registry for ordinary long guns would have nothing to do with Gill’s firearms (all of which would still be registered as “restricted weapons”), the opportunistic leaders of the Liberal Party and the Bloc Quebecois used the Dawson murders to declare that parliamentary members of their party would be “whipped” (required) to vote against scrapping the long gun registry.

Canadian Member of Parliament Garry Breitkreuz is the leader of pro-rights forces in the House of Commons. He is also co-chair of the Outdoor Caucus, a multi-party group of mps who support Canada’s traditions of hunting, fishing and conservation. Breitkreuz suggests that Canada get rid of the gun registry and replace it with a registry of people who are prohibited from possessing firearms.

Breitkreuz points out that it is ridiculous that a licensed firearm owner must report an address change to the government’s Canadian Firearms Centre, yet a person who is legally barred from owning guns is subject to no such requirement.

The reactions to the Dawson shooting reflect an important cultural divide in Canada. On one side are people such as columnist John Robson, who wrote in the Ottawa Citizen, “The most notable thing about the Dawson College shooter is not that he was armed but that he was wicked. If Canadians, like Americans, have been rodded up for centuries, yet mass shootings are a recent phenomenon, then maybe we need moral rearmament, not material disarmament.”

On the other side are Canadians who also see a moral problem--namely that Canadians think too much like Americans. James Laxer, a political science professor at York University, calls for gun confiscation. He complains that Canada has “a watered-down version of the gun culture in the United States.”

As an example of the “rancid” American gun culture, Laxer quotes, accurately, from a magazine article I wrote:

“The ownership of firearms by modern Americans is important not just for practical reasons (such as protecting homes from criminal invaders) but for moral ones. A homeowner who never has to use his gun for self-defense still possesses something his unarmed next-door neighbor does not: he has made the decision that he, personally, will take responsibility for defending his family. The armed homeowner’s self-reliance has powerful moral consequences, as does the disarmed neighbor’s decision that his family’s safety will depend exclusively on the government, and not on himself.”

Even Prime Minister Harper accepts, to some degree, the culture wars paradigm of Canada’s far left. Harper has vowed to fight “the gun culture.”

Post-Dawson, Harper’s government is considering further restrictions and bans on semi-autos. He has always declared his intention of keeping the “restricted weapon” registry (handguns and some semi-auto long guns), which dates back to the 1930s, even though that registry has also proven itself of very little utility.

Canada’s anti-gun culture warriors have not yet succeeded in eradicating the Canadian culture of outdoor sports, but they have almost entirely destroyed the legal right of Canadians to be armed for legitimate defense. It is even illegal to carry self-defense sprays for protection against crime.

Such sprays are, technically, allowed for defense against bears, but of course nobody on a Montreal college campus would be allowed to carry bear pepper spray.

Writing in the Toronto Star, Canadian journalist Rondi Adamson described herself as “a latte-drinking urbanite who has no interest in owning a gun of any kind.” She has concluded, though, that there is “no societal benefit” to gun registration.

Her solution: “Had all, or many, students and faculty at L’ École Polytechnique, or Dawson College, been armed, Marc Lépine and Kimveer Gill would have been taken out quickly.”

Should college and graduate school women and men who are attacked by hate-filled killers be allowed to resist and thereby save lives? Or would that be “too American”?

IN THIS ARTICLE
International/UN Gun Control Issues
UP NEXT x