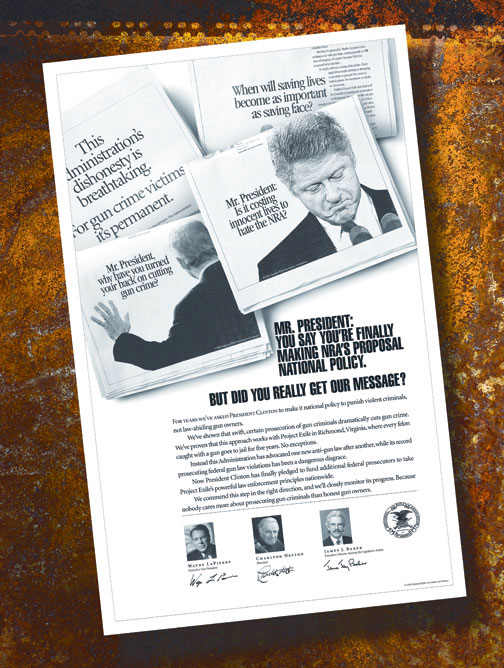 Beginning in 1997, police in Richmond, Va., began carrying a wallet-sized card (above) that outlined the existing law to prosecute felons caught in possession of a gun. 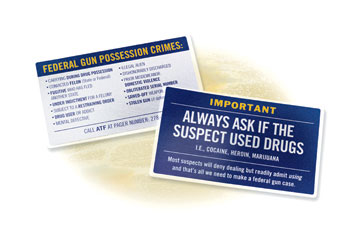 “Always ask if the suspect used drugs, i.e., cocaine, heroin, marijuana. Most suspects will deny dealing but readily admit using and that’s all we need to make a federal gun case.”

Billboards across Richmond carried a stark and simple warning:

“An illegal gun gets you five years in federal prison.”

Striking Fear in the Heart of a Killer It was called Project Exile, the brainchild of then-Assistant u.s. Attorney David Schiller, an aggressive effort to arrest, indict, incarcerate, prosecute and sentence every armed felon in Richmond.

It’s precisely what nra has preached for 20 years. So nra immediately made a $100,000 donation and launched a campaign for public support.

Project Exile meant zero tolerance for criminal gun use. No deals. No plea-bargains. No bail. No exceptions. Commit a crime with a gun and you’re done.

It worked like this: A police officer arrests a suspect carrying a gun. He asks the suspect the questions on the card. If the suspect answers “yes”--bang--he’s nailed on a federal gun crime. Conviction meant a mandatory five years in federal prison. No questions asked.

According to police, drug dealers would commonly throw down their guns before running to avoid the punishment they knew Project Exile delivered.

Many criminals stopped carrying a gun when Project Exile was instituted. A Richmond police sergeant reported that when he stopped and searched one suspect, “Right out of his mouth, he goes, ‘Exile will give you five years. I’d be an old man when I got out.’” The man was unarmed.

The bigger picture was much more dramatic:

» In less than two years, Exile had taken 350 armed felons off the streets. Most of those it sent to prison for 4½ years.

» It cut the “gun carry” rate among arrested suspects by more than half.

» All told, it cut Richmond’s murder rate by 62 percent.

So it’s not surprising that in Rochester, Philadelphia, Fort Worth, San Francisco, Birmingham and beyond, one city and state after another has adopted Richmond’s Project Exile model.

Project Exile said with merciless certainty that guns are for the law-abiding, and it’s proof of what nra has been saying for decades: Get tough on criminals, not on our right to own guns, and crime will disappear.

Exiling Armed Felons Nationwide In May 2001, President George Bush introduced a new national effort--Project Safe Neighborhoods--and he pointed to Project Exile as inspiration for the program.

Project Safe Neighborhoods is a nationwide commitment to reduce gun crime by networking existing local programs that target gun crime and providing those programs with additional tools necessary to be successful. The Bush administration committed over $1 billion to this effort in its first four years to put federal muscle behind state and local gun-crime prosecutions.

A companion program is Operation CeaseFire, a joint local, state and federal initiative to aggressively prosecute individuals who unlawfully use, possess or transfer firearms.

Thanks to nra support, prosecution of criminals--not banishment of guns--is the new and effective theme for law enforcement and jurisprudence nationwide.

Virginia: AG-Elect Jason Miyares to Focus on Punishing Criminal Actions Instead of Law-Abiding Gun Owners
Have we become too paranoid about mass shootings?
Widespread Ignorance: Americans Wrongly Believe Most Gun Deaths in US Are Homicides and Mass Shootings