Victory in the Senate 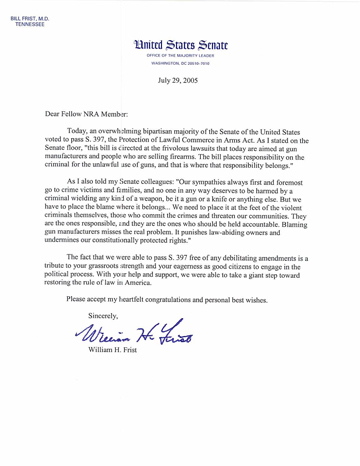 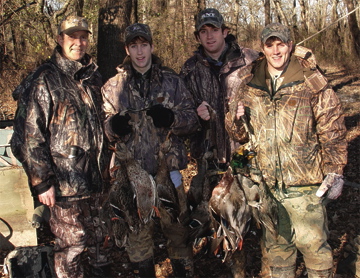 Senate Majority Leader Bill Frist, who enjoyed a recent hunting trip back home in Tennessee with sons (l.-r.): Brian, Harrison and Jonathan, noted in his remarks opening debate on S.397 that "Right now my favorite avocation is taking my sons hunting on the weekend, to be together and share fellowship."

As NRA Members you`ve played a major part in all our efforts to pass the Protection of Lawful Commerce in Arms Act. It`s been a long battle. When we came close last year only to see our bill defeated in the Senate because of anti-gun amendments, you refused to give up. NRA refused to give up, and our unified voices have been heard. What a difference a year can make.

Wayne LaPierre has called the Senate vote on S.397 "A ground-breaking step forward for America`s firearm manufacturers, retailers and owners." Wayne is right on target, and in our media interviews he and I also point out that the bill was so critical to national security interests that it prompted the Department of Defense to issue a strong letter urging passage. 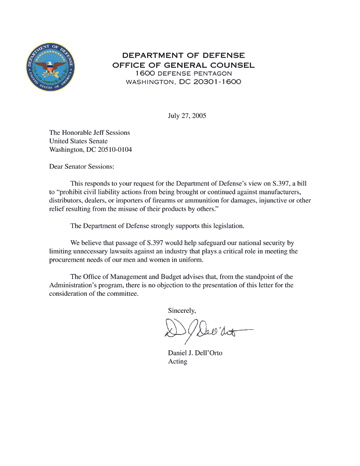 So how did S.397 pass by such an overwhelming bipartisan majority after being defeated in 2004? In a single word--elections. They matter, and your votes matter.

Last November we added four pro-gun votes to the Senate and worked with South Dakota gun owners to retire obstructionist Senate Minority Leader Tom Daschle. These victories not only provided a broader majority for us to work with in the Senate, but also helped create a new Minority Leader in Sen. Harry Reid (D-Nev.)--a longstanding supporter of S.397.

But this debate was really not about politics as usual. The Protection of Lawful Commerce in Arms Act had 62 co-sponsors--Senators from both sides of the aisle--because it was carefully crafted legislation aimed at ending abuses of our legal system. The House of Representatives recognized this plain fact last year, when it passed nearly identical reform by 285 to 140. I have every reason to expect that the House will re-affirm its support for this common-sense legislation again this year, and we will get a bill on President Bush`s desk very soon. The Bush Administration strongly endorsed the legislation in a July 26 policy statement that is reprinted here. 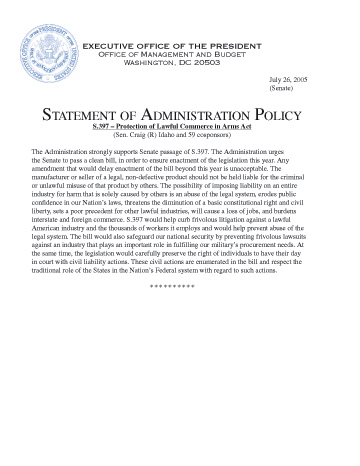 No commentary on the landmark victory can be written without acknowledging the role played by Senate Majority Leader Bill Frist (R-Tenn.). He was unyielding in his efforts to ensure that S.397 received a fair hearing and that the bill was not "poisoned" with anti-gun amendments.

Gun owners also owe a large debt to Sens. Larry Craig (R-Idaho) and Max Baucus (D-Mont.) for their steadfast hard work in marshaling this reform effort through the Senate. Senate Majority Whip Mitch McConnell (R-Ky.) and Senate Republican Conference Chairman Rick Santorum of Pennsylvania were also vital members of this winning team, working with their colleagues to make sure the bill would come up for a vote before Congress left for its August recess.

We needed a filibuster-proof 60 votes to ensure S.397`s passage, and, of course, this would have been impossible without support from Senators from both parties. Thanks are due also to Minority Leader Reid for supporting this legislation and to the members in his caucus who voted for the bill.

For those readers who were not able to follow the S.397 debate on C-SPAN, I want to make sure to point out that Sens. Jeff Sessions (R-Ala.), Orrin Hatch (R-Utah), Lindsey Graham (R-S.C.) and Ben Nelson (D-Neb.) spoke forcefully on the floor for your Second Amendment rights.

The usual "rogues gallery" of anti-gun Senators was also present, led, in decibel count at least, by Edward Kennedy (D-Mass.). Kennedy was forced to turn up the volume to cover his embarrassment when his bullet ban amendment, offered in the name of protecting law officers, drew strong opposition from the nation`s largest law enforcement group--the Fraternal Order of Police. 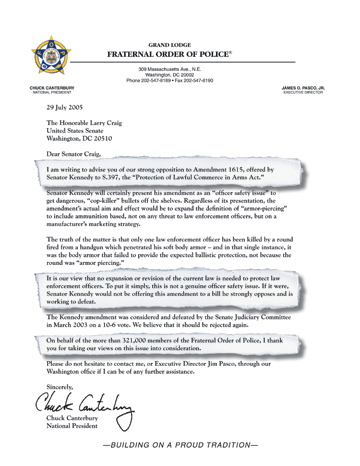 Taking the floor with Sen. Kennedy to rail against S.397 were Jack Reed (D R.I.), Mike DeWine (R-Ohio), Frank Lautenberg (D-N.J.) and Richard Durbin (D Ill.), among others. The others include two Senators worthy of special mention.

First, there is Evan Bayh (D-Ind.). Sen. Bayh pledged last year to support legislation to block frivolous lawsuits against the firearm industry, and NRA sent a letter to Indiana members encouraging them to thank him. Sen. Bayh failed to honor his pledge and voted for the Reed amendment to completely gut S.397. When the Reed substitute was soundly defeated 63 to 33, Bayh voted against final passage of the bill.

Unlike Bayh, Sen. Bill Nelson (D-Fla.) is up for re-election next year. He tried a different strategy. After first trying to eviscerate S.397 by supporting the Reed amendment, he turned around and voted for final passage. This has confused some Florida hunting buddies of mine--they can`t decide whether to call the flip-flop move a "half-Nelson" or a "full-Nelson." In any event, his two votes are instructive in that they prove that final votes don`t always provide a complete picture of the truth. (Click here for a list of roll call votes on all amendments and final passage of S.397.)