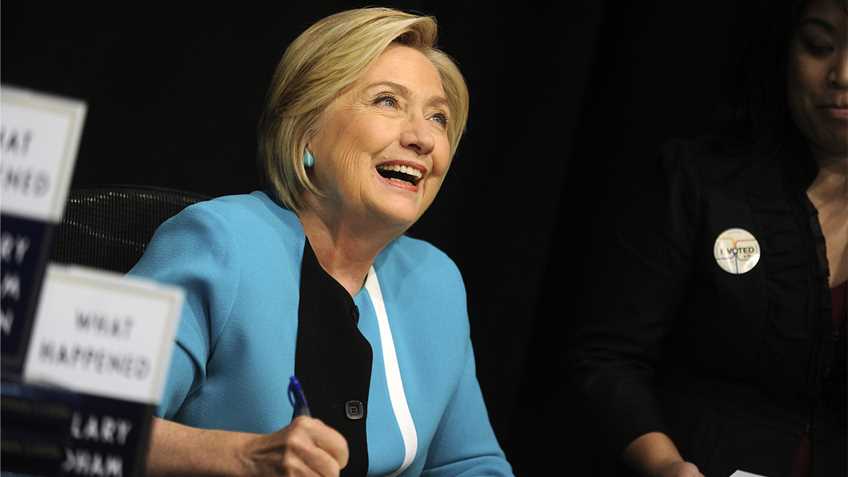 This week, twice-failed presidential candidate Hillary Clinton released her new book, “What Happened,” which chiefly serves to assign blame to the myriad politicians, journalists, organizations, countries, prejudices, and technologies she claims caused her defeat. Gun rights supporters will be happy to know that NRA is featured prominently.

In addition to apportioning NRA its well-deserved share of the blame, Clinton seeks to rewrite her own history on the gun issue and urges her fellow Democrats to ignore political reality and continue to champion gun control.

Clinton repeatedly acknowledges NRA’s influence on the 2016 election and the broad political landscape.

Pointing out the grassroots power of gun rights supporters, Clinton explains, “The politics of guns has been toxic for a long time… The vocal minority of voters against gun safety laws have historically been more organized, better funded, and more willing to be single-issue voters.”

Recounting her first policy speech of the 2016 campaign, where she attacked NRA, Clinton admits, “Going after the NRA is dangerous for candidates…”

Reiterating some of the same points Bill Clinton made about NRA’s power in his 2001 autobiography My Life, Clinton writes,

In the 1990s, my husband fought hard to pass both a ten-year ban on assault weapons and the Brady Bill, which, for the first time, required background checks on many gun purchases at federally licensed firearms dealers… The NRA funded an intense backlash to the new safety measures and helped defeat a lot of Democratic members of Congress in the disastrous 1994 midterm elections. Then, in 2000, the NRA helped beat Al Gore.

As for the NRA, it kept its promise to do everything it could to stop me. All told, the gun lobby spent more than $30 million supporting Trump, more money than any other outside group and more than double what it spent to support Mitt Romney in 2012. About two-thirds of that money paid for more than ten thousand negative ads attacking me in battleground states.

Clinton’s recognition of NRA’s role in her and her husband’s defeats should motivate gun owners in the continuing fight to defend the Second Amendment and serve as a stark warning to anti-gun politicians.

Despite an established record on gun control that spans her nearly three decades on the national stage, Clinton tries to use her new book to recast herself as a moderate on the issue.

Employing a traditional patronizing tactic of anti-gun politicians, sportswoman Clinton regales the reader with tales of her hunting prowess, and how her experience in the field forged her purported respect for firearm ownership. Clinton writes,

I remembered my father teaching me to shoot in rural Pennsylvania, were we spent summers when I was growing up. I also lived in Arkansas for many years and went on a memorable December duck hunting expedition with some friends in the 1980s. I’ll never forget standing hip deep in freezing water, waiting for the sun to rise, trying to stave off hypothermia. I did manage to shoot a duck, but when I got home, Chelsea, who had just watched Bambi, was outraged by the news that I’d shot “some poor little duck’s mommy or daddy.”
These experiences reinforced for me that, for many Americans, hunting and gun ownership are ingrained in the culture.

Shortly after this segment, Clinton claims,

In all my political campaigns, I’ve done my best to strike a fair balance between standing up for commonsense gun safety measures and showing respect for responsible gun owners. I’ve always said that I recognize the Second Amendment and have never proposed banning all guns.

This passage is an outright lie. In her various campaigns for public office Clinton has supported the most extreme gun control proposals and repeatedly rejected the United States Supreme Court’s holding in District of Columbia v. Heller that the Second Amendment protects an individual right to keep and bear arms.

During her 2000 senate campaign, Clinton gave a speech to the Newspaper Association of America where she stated, “We need to license and register all handguns… Licensing gun owners and registering their guns are two of the most important pieces of a real gun safety policy.” That year Clinton also acknowledged her support for a “ballistics database for all new guns,” handgun rationing, and a ban on affordable handguns. Anti-gun Sen. Charles Schumer (D-N.Y.) said of candidate Clinton, “New York needs Hillary Clinton because she will vote with us on gun control 100 percent of the time.”

Making clear that Clinton was not interested in striking a “balance” on firearms, during her 2016 presidential campaign, Clinton expressed her support for Australia-style gun confiscation to a town hall meeting in Keene, N.H.

Further, in her new book, Clinton writes that, “As a young woman, I was moved and inspired watching… Dianne Feinstein take on the NRA.” The time frame Clinton refers to is unclear. Would this pertain to Mayor Feinstein, who worked to enact an unconstitutional handgun ban in San Francisco? Or perhaps Sen. Feinstein (D-Calif.), who in 1995 expressed her desire to confiscate commonly-owned semi-automatic firearms?

Throughout her political career Clinton has shown nothing but contempt for gun owners and the Second Amendment. Given that Clinton’s long-standing antipathy to gun rights is conspicuous and well-documented, her attempts at historical revisionism won’t fool anyone.

Attacks on NRA and Gun Owners

On the 2016 campaign trail, Clinton revealed her contempt for tens of millions of Americans when she famously claimed that “you could put half of Trump’s supporters into what I call the basket of deplorables.” In her new book, Clinton uses similarly offensive rhetoric to malign NRA and its millions of supporters.

According to Clinton, NRA is “one of the most reactionary and dangerous political organizations in America.” In her view, NRA and its supporters are on the “wrong side” of “justice, history, [and] basic human decency” and have a “twisted ideology” that “costs thousands of American lives every year.” Those who feign shock at aggressive messaging and decry the debased state of politics should challenge Clinton for such inflammatory writings.

As much as Clinton would like to portray NRA as an enemy of all mankind, the American public does not share her intolerant view. A 2015 Gallup poll found that 58 percent of Americans had a favorable view of NRA. A 2016 Wall Street Journal/NBC News poll showed that NRA’s favorability outpaced Clinton’s by 9 points, while Clinton’s unfavorable number was 19 points higher than NRA’s.

More recently, a July Bloomberg poll found that Clinton is less popular than President Trump, whom she spends much of her book berating. A June Gallup poll showed that Clinton is now even less popular than she was on Election Day 2016, a circumstance unique among defeated presidential candidates. Rather than smearing wide swathes of the American public, Clinton might do well to reflect on why so much of the population finds her problematic.

Following the 2016 election, many have suggested that the Democratic Party must reexamine its positions on a number of issues in order to compete in parts of the country that favored President Trump. Despite her defeat, and her acknowledgement that NRA and gun owners influenced the 2016 election, Clinton contends that Democratic leaders should not temper their views on gun control.

I’m sure that some of my fellow Democrats will look at this high-priced onslaught and conclude, as many have in the past, that standing up to the NRA just isn’t worth it. Some may put gun safety on the chopping block alongside reproductive rights as “negotiable,” so as not to distract from populist economics… That would be a terrible mistake, Democrats should not respond to my defeat by retreating from our strong commitments on these life-and-death issues.

Following Al Gore’s defeat in 2000, the national Democratic Party made a concerted effort to downplay their support for gun control. Democratic candidates were permitted to reflect their own constituents’ views on guns and the Democratic Party Platform was changed to better respect the individual right to keep and bear arms. In 2008, Democratic presidential nominee Barack Obama sought to avoid the issue altogether. These proved to be smart decisions that helped make the Democratic Party competitive throughout the country.

At this juncture it’s unclear whether Democratic leaders will listen to a twice-failed presidential candidate and continue their assault on the Second Amendment or rediscover the more pragmatic approach that has worked in the past. On September 7, The Hill quoted a “former Clinton fundraiser and surrogate” who told the news outlet, “The best thing she could do is disappear… She’s doing harm to all of us because of her own selfishness. Honestly, I wish she’d just …  go away.” When it comes to Clinton’s outmoded approach to guns, wise Democrats should express a similar sentiment. 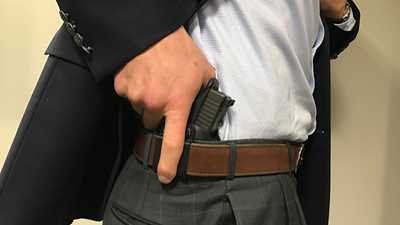