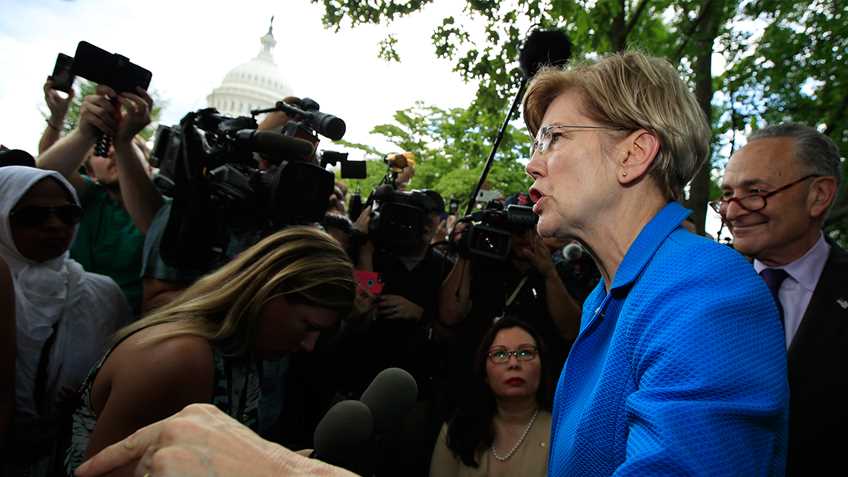 Just as many in the Democratic Party are seeking to moderate their message in order to once again compete as a national political party, some high-profile Democrats are urging the party to lurch further left with an even firmer embrace of gun control.

On June 13, Sen. Elizabeth Warren (D-Mass.) addressed those gathered at the “progressive” Netroots Nation conference in Atlanta, Ga. In her usual frenzied style, Warren used the forum to attack those Democrats who would moderate the party’s message, including those who would temper the party’s stance on guns.

Going further than most anti-gun activists and politicians, her command for Democrats to champion gun control included a call to shut down discussion on the topic. In doing so, Warren seemed to liken the issue of gun control to that of global warming, which many activists have long-attempted to put beyond the scope of legitimate debate.

During her wide-ranging diatribe, Warren stated,

It’s time for us to say: Democrats are on the side of science.

We’re done arguing about whether climate change is real – and we’re going to fight it with everything we have.

We’re done arguing about whether trickle-down economics works – and we’re going to fight to build this economy so it works for working families.

We’re done arguing about gun safety – and we’re going to fight for the common-sense reforms the overwhelming majority of Americans want.

First, there is nothing remotely close to a scientific consensus on the efficacy of gun control advocates’ most favored proposals. A 2013 memo from the Department of Justice’s National Institute for Justice surveyed the research on several gun control measures. In relation to a restriction on the private transfer of firearms, the NIJ determined that such a measure would be ineffective unless coupled with an onerous registration regime. Addressing restrictions on commonly-owned semi-automatic firearms, NIJ determined, “Since assault weapons are not a major contributor to US gun homicide and the existing stock of guns is large, an assault weapon ban is unlikely to have an impact on gun violence.” So-called “smart guns” were found “Unlikely to affect gun crime.”

Moreover, earlier reviews of gun research and controls by the National Academies have made clear that the senator’s absolutist statement is unwarranted.

Second, while gun control proponents are quick to point to polls showing public support for restrictions on the private transfer of firearms as a justification for trampling gun rights, actual experience paints a different picture. In 2016, anti-gun activists’ most-touted gun control measure was on the ballot in two very different "blue” states, Maine and Nevada. When given the opportunity to vote on this legislation, Mainers rejected further gun control, while Nevadans narrowly passed a misleading and unenforceable background check initiative by less than a 1 percent margin. Not exactly evidence of an “overwhelming majority.”

If there is any positive aspect to Warren’s recent anti-gun statement, it is that the senator was so forthright in her attack on our Second Amendment rights. For many years, gun control advocates and anti-gun politicians have implored lawmakers and the nation to have a much-needed “conversation” on gun control. Of course, the country has been embroiled in a nearly ceaseless national debate on the topic since the 1960s.

This tactic is always an anti-gun ruse. Rather than an earnest debate on the merits of a given proposal, those using this language are exclusively concerned with achieving their preferred policy outcomes. While Warren is incorrect that the argument over gun control has been decisively determined in her favor, at least she has dropped the ridiculous pretext of wanting a serious debate.

Warren’s hardline anti-gun position might play well in Massachusetts, a state where the fanatical attorney general has been permitted to willfully misinterpret state law to attack law-abiding gun owners and local law enforcement have discretion over who may possess even a single-shot shotgun. Given Hillary Clinton’s fervent support for the most radical gun control measures and her subsequent ascent to the Democratic presidential nomination, it’s obvious that militant anti-gun messaging is also attractive to some of the more statist elements of the Democratic Party. However, there is strong evidence that if the Democrats are interested in competing nationally, a more moderate stance on Second Amendment rights is the way forward.

Democratic Party leaders, and Democratic candidates running in competitive elections, will have to decide whether to follow the lead of someone likely bolstering her left-wing credentials to run for the Democratic presidential nomination in 2020, or look to history and recognize the wisdom in former Democratic Congressional Campaign Committee Chair Rahm Emanuel’s determination that Democratic candidates should “reflect” their constituents.