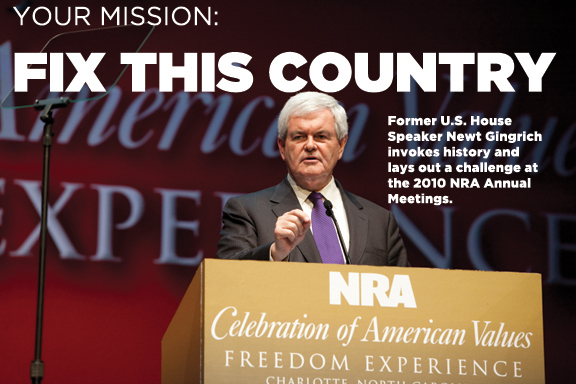 When more than 10,000 ardent Second Amendment defenders gathered at the Time Warner Cable Arena in Charlotte, N.C., for the Celebration of American Values Freedom Experience during the 2010 NRA Annual Meetings, they did so just five days shy of the 235th anniversary of an event with both local and national significance--a historical coincidence not lost on one of the evening`s headline speakers.

Prior to serving 20 years in the U.S. House of Representatives, culminating with his stint as Speaker of the House from 1995 to 1999, Newt Gingrich was a college history professor. It should come as no surprise, then, that when delivering his frank discussion on individual liberty, campaign finance reform and Second Amendment rights at the Annual Meetings gala event, he couched his monologue in historical terms.

"I believe it is time we had a total, clear, unequivocal argument about who we are as a people, and what our government is, and what the basis of it is," Gingrich told the audience.

With that, Gingrich once again assumed the role of history professor, albeit one with a lesson not likely to be taught by the academic elites. Gingrich described to the cheering NRA members the role Charlotte and the surrounding Mecklenburg County area played in the establishment of freedoms we hold dear as Americans.

Gingrich recounted the events leading to this historic declaration.

The parallel between British Colonial rule in early America and the modern political landscape was lost on no one in attendance as Gingrich continued his lesson on the birth of American liberty.

Gingrich recounted how the British, seeking to quell the increasingly rebellious sentiment among the colonists, dispatched soldiers to rural Massachusetts in April 1775. When the soldiers arrived, they were shocked by what awaited them.

"That was called the shot that was heard around the world and it was heard here, in Mecklenburg County," Gingrich told the cheering crowd.

"The heart of the American experience that no modern liberal academic wants to teach, and no modern, liberal news media wants to cover is a political document," Gingrich said. "This political document is our Declaration of Independence. It says we are endowed by our Creator with certain inalienable rights. We are the only nation in the world that says power comes from God to each one of you, and you are personally sovereign, and you loan power to the state.

"The state is not the center of the power," Gingrich said, as the crowd sat on the verge of another thunderous round of applause. "The citizen is the center of power."

Gingrich went on to explain why "secular socialists," as he terms them, despise and seek to undermine the First and Second Amendments to the Constitution.

"The First Amendment has two provisions that drive them crazy: The first says that Congress shall make no law abridging freedom of speech. Of course, from McCain-Feingold to all the various campaign laws, to the most recent effort by Chuck Schumer, these are all just efforts at protecting incumbents.

"The Founding Fathers had a simple model," Gingrich said. "Citizens ought to have the freedom to say what they want to say, when they want to say it, and if it makes politicians uncomfortable, let them quit elected office.

"The second thing that the left hates about the First Amendment," Gingrich continued, "is its statement ‘Congress shall make no law respecting the establishment of religion.` Remember, when the Founding Fathers wrote the First Amendment, they said our rights come from our Creator.

"That limitation to government inherent in the model of God-given rights makes it very hard to be a true socialist. It means that instead of the state being in charge, and instead of politicians, to take a recent case, deciding how much you should be able to earn based on whether or not the politician likes your particular company or your industry or your personality, in fact, it is none of the politician`s business because you have the God-given right to pursue happiness with no exception for when Obama is unhappy."

From there, Gingrich explained the wisdom of the Founding Fathers in making a provision for the citizenry to protect not only its First Amendment freedoms, but all other freedoms enumerated within the Constitution and Bill of Rights.

Calling not only on his knowledge of history but also the rhetorical skill he honed during two decades of service as a representative of the people, Gingrich laid waste to the modern notion that the Second Amendment is not an individual right--that it is an anachronism, relevant only to an age of musket-carrying Colonial